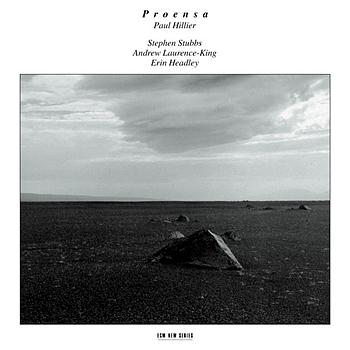 “I’ll write a song without great force
and not of me or other source
and not of love or youth, of course:
nothing at all.
I’ll write it sleeping on my horse
so’s not to fall.”

The title of this fascinating project from Paul Hillier refers to the southern French region of Provence, where the lyric poets of the troubadour tradition from which the album culls its music once flourished. Utilizing extant fragments of Provençal texts and melodies, Hillier and his musicians reconstruct a visceral program of songs.

As the earliest troubadour whose work still survives, the appearance of Guilhèm de Peitieus (fl. 1071-1126) first on the program makes for an intuitive choice. Farai un vers is the fifth of his eleven extant songs. The arrangement opens with a delicately strummed psaltery, stretching and detuning in reaction to Hillier’s narration as Stephen Stubbs’s lute creeps in from some unseen realm. The effect is unsettling, rather like the imminent death related in the poem being spoken. Hillier luxuriates in each word like a story in and of itself. “My song is sung, I don’t know how,” he says in the last verse, walking a path without melody with words that are nothing but melodious.

Reis glorios, by Giraut de Bornelh (c. 1138-1215), is a planh, or secular lament, written in honor of Raimbaut d’Aurenga (c. 1147-1173). Known as the inventor of the trobar leu, or “light” style, Giraut showcases his formulaic precision in this piece. With a refrain of “Fair companion…” he mourns the King’s absence: singing would seem to matter little in a world without him. This song evolves over peaks and valleys, drawing out a luscious voice from their depths, and ends with a beautiful solo from Erin Headley on the vielle.

Raimon de Miraval (fl. 1180-1220) was also a master of trobar leu. Of his extant collection of forty-five songs, an unprecedented twenty-two have retained their melodies. Unlike his contemporaries, Raimon was more interested in the “courtliness” of courtly love than in the love it both ennobled and constrained. In Aissi cum es genserpascors, Raimon is woefully fed up with the ways in which women of the court discourage their mercy-seeking friends, thereby permitting access to the most unworthy suitors. “Thus courtly song falls silent,” he laments, “and out come accusations and mad tumult.” Knowing full well that he could rat these ladies out, he would rather plead for mercy himself “From her who has the savor of all goodness,” thus implicating himself in the vicious cycle he so despises. The music begins softly and pointillistically, condensing into the resonant strum of Andrew Lawrence-King’s harp. From this cloud a voice issues, singing its self-deprecating song. The music is dynamic, if secondary to the language it supports, and fades once the voice has spent its spell.

Marcabru (fl. 1130-1150) is among the earliest known troubadours. His poetry is critical—at times lewdly so—of aristocracy and what he saw to be its twisted concept of love. Of his works that survive there are four melodies, in addition to three possible contrafacta (i.e., melodies interchangeable with more than one text). In L’autrier una sebissa, written as a pastorela (an often humorous Occitan lyric known for depicting knights’ attempts at seducing shepherdesses), the prototypical shepherdess refuses the advances of a knight for reasons of class. He tries a variety of tactics with which to win her over, but to no avail. “I am pained because the cold pierces you,” he says. To which she quips,

“Thanks to God and my nurse,
It does not concern me if the wind ruffles my hair,
For I am cheerful and healthy.”

He offers his company for her loneliness, of which she expresses no remorse. Perhaps she is of noble extraction? But alas, she sees her entire family “going back to sickle and plow.” He chalks up their coupling to the ways of nature, only to be met with the following admonition:

“The fool seeks his foolishness,
The courtly, courtly adventures,
And the peasant boy, the peasant girl;
Wisdom is lacking in any place (circumstance)
Where moderation is not observed,
So say the ancients.”

Whereas moments before the knight had proclaimed her unmatched beauty, he know declares her to harbor the most deceitful heart in the land. This elicits her cryptic final word:

“Sir, the owl promises you
That one man gapes before the painting
While the other expects reward.”

Such songs were a direct commentary on what Marcabru saw as lust’s inherent absurdity. This song has a catchy melodic lilt to it, consisting of refrains interlaced with instrumental interludes. Hillier carries full weight here through a melody that lingers long after its consummation.

Bernart de Ventadorn (fl. 1145-1180), master of trobar leu and formalizer of cansos (standard three-part songs), boasts forty-five extant poems, of which eighteen also have music. Be m’an perdut arises from a gorgeous harp solo. Voice and lute double each other throughout this repetitive lament of lost love. Hillier sings:

“Like some great trout that dashes to the bait
Until he feels love’s hook, all hot and blindly
I rushed toward too much love, too rash to wait,
Careless, till ringed in by love’s flames I find me
Seared as by furnace fires upon a grate.”

These post facto realizations tug at the heartstrings, as relevant as ever in their ability to elicit the listener’s concern. The only way in which one may find joy in this pain, Bernart tells us, is to embrace it:

“In luck and honor, let her still be blest,
And I her lover, liege and servant ever
Whether that makes her joyful or distressed.”

I daresay most of us can hear an echo of our own experience in these words, if not also in the way they are sung.

Can vei la lauzeta, also by Bernart, opens like the previous song, save for the added presence of a vielle droning in the background. The speaker of the poem sees a skylark, whereupon he feels great envy for the rapture the bird so readily enjoys:

“Alas, I thought I’d grown so wise;
In love I had so much to learn:
I can’t control this heart that flies
To her who pays love no return.”

As a result, he swears off women forever. “Now that I distrust them, one and all,” he asserts, “I’ve learned too well they’re all the same,” even as we know he will fall again. The music is in a Dorian mode that captures the destructive spiral of its subject.

Of Peire Vidal (fl. 1175-1205) we also have forty-five songs, twelve with melodies. Pos tornatz sui is a song of contradictions, of finding solace in life’s tribulations:

“Here is joy for all my tears;
Boldness springs from my worst fears;
Having lost, I’ve gained much more
And though beaten, won my war.”

Through every foul turn Peire finds a pathway to change. This is, I would argue, the most spiritual poem represented here, insofar as it acknowledges the impermanence of human concerns over illusionary social allegiances.

By the end of the Crusades the barons of southern France were financially and emotionally drained, leaving no resources for the patronization of song (for more on this, see Robert Kehew’s introduction to Lark in the Morning: The Verses of the Troubadours). It was in this climate that Guiraut Riquier (fl. 1254-1292), considered the last of the Provençal troubadours, composed Be’m degra de chantar (“It Would Be Best If I Refrained From Singing”), in which he signals the passing of the troubadourian era:

“Now no art is less admired
Than the worthy craft of song.
These days the nobles’ tastes have run
To entertainments less inspired.
Wailing mingles with disgrace:
All that once engendered praise
From the memory has died:
Now the world is mostly lies.”

I can think of no more powerful statement to capture the demise of this rich musical art, and Hillier appropriately speaks it without the company of instruments.

If any single word could be applied to this album, it would be “haunting.” This is not to imply that it is a particularly “dark” album, but one that seems to occupy a space uninhabitable by the living. This music breathes at the very edges of our consciousness, which is perhaps why it is so vocally driven, for only through the frailty of the voice can its strengths be expressed. The language is similarly peripheral, with its shades of cognates and other etymological minutae. The arrangements get under the listener’s skin, evoking an atmosphere at once so antiquated as to be unrecoverable while also so modern that it could exist at no other time but the (recorded) present. The spirit of the music is easy to see, if difficult to place, for it is something felt on a physiological level, residing in our sense of collective history. The music unfolds in a way that is always aware of its origins, leaving us to question our own.