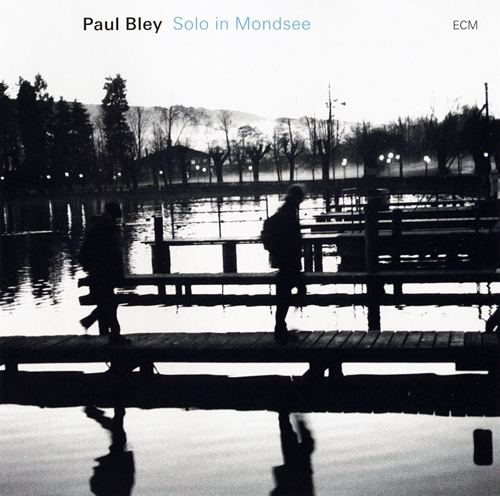 The release of Solo in Mondsee in 2007 marked the 75th birthday of Paul Bley, and his first solo recording since 1972’s Open, To Love. Like the first, it owes its existence to producer Manfred Eicher, who on both occasions lured Bley onto solitary terrain. This time, the Montreal-born pianist sits at a massive Bösendorfer last heard under the fingers of András Schiff in a New Series program of Schubert’s C-major Fantasies. The instrument equally suits Bley’s preference for long sustains, as made lucid in the album’s opening statement: a resonant hit of the lowest strings. From this he summons ghosts of familiar songbooks, and bodies of those more distant, across ten so-called “Variations,” whose only theme is the absence of one.

Bley’s craft is an admixture of the ethereal and the gravid. He works from a palette so expansive that perhaps only Keith Jarrett has matched it in this unaccompanied format, and with tenderness so beguiling it tightens the ribcage to hear it. The freedom of his exponentially refreshing playing imbues the first numbered section with declamatory sparkle. Like Variation IV, it evokes warmth in winter by a peerless ballet of touch and tendon.

In contrast to these sweeping narratives, Bley gives props to whimsy on a handful of Variations. There are the dissonances and chromatic ladders of II, the centrally focused III, and the busier V and VIII, the eddying of which evokes the end of a waterfall. Variation VI is an especially brilliant turn for its fusion of the epic and the intimate. Its densities never occlude, but allow the light to sing over a flourishing undercurrent. The tenth and final Variation possesses an almost teasing quality, but leads toward a fragile, shape-shifting meditation.

Bley finger-walks on water and gifts solace in return, turning the world into a chamber, and the chamber into a universe.