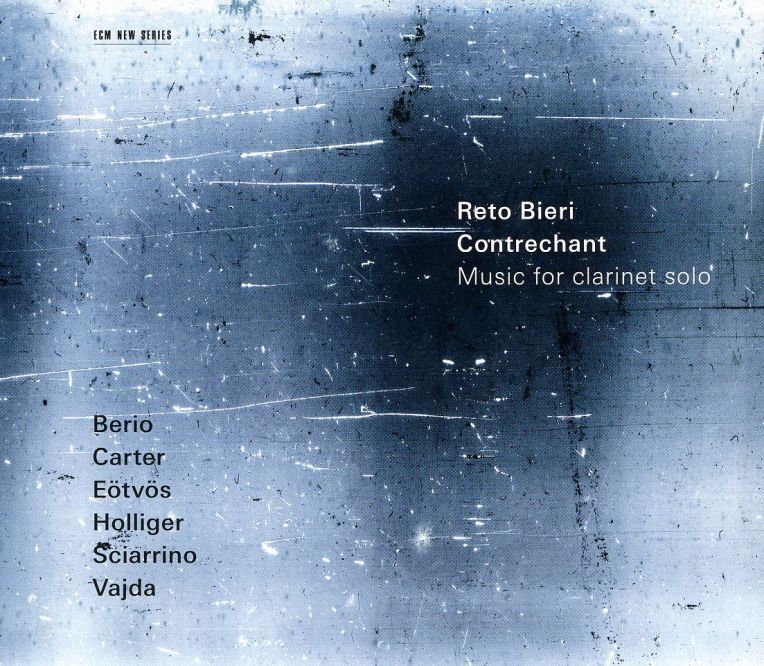 Within the ECM New Series sub-catalogue of solo recordings, the label debut of Reto Bieri stands out for impeccable selection and technical prowess. The Swiss clarinetist studied at Basel’s Academy of Music and at the Juilliard School before embarking on a solo career in collaboration with new and established composers alike, and the fruits of those efforts are bursting from their skins on Contrechant. Luciano Berio is the only featured composer with whom Bieri did not work in preparing for this album, and his 1983 Lied opens the program with its cantabile, legato phrasings. Aside from establishing something of a theme (in his liner text, Paul Griffiths notes among these pieces an affinity for song), the meticulousness of Bieri’s approach to the instrument sets a precedent for mood and timing. At his fingertips—each a hand unto itself—the deceptive simplicity of Berio’s spatial grammar feels omnipresent.

Likewise omnipresent are the grammars of Salvatore Sciarrino and Heinz Holliger. Both composers make illustrative use of multiphonics and formidable extended playing. The former’s 1982 Let me die before I wake reveals a matrix of overtones so rich that the addition of any other instrument would be an intrusion. Its artisan quality seems to plane away its own surface until underlying patterns are revealed. The album’s title piece comes from Holliger. Composed in 2007, it strikes a characteristic balance between darkness and whimsy. Each vignette therein is a window both into itself and into the whole. Across a range of transcendent voicings, it steps through a spectral door in the five-minute epilogue. Holliger’s Rechant (2008) bears dedication to the late Swiss clarinetist Thomas Friedli, with whom Bieri briefly studied. Despite its kindred telemetry of action and reaction, of interpretation and extrapolation, a lighter footprint makes it a song of more internal measures.

The title of Elliott Carter’s Gra means “to play” in Polish and was written in 1993 to commemorate Witold Lutosławski’s 80th birthday. With its leaping figures and exacting breath control, it is a virtuosic feast, to be sure. Beyond that, its youthful pilot light flickers with verve. Péter Eötvös’s Derwischtanz (1993/2001), on the other hand, travels upward rather than inward, shuffling staircases before falling like an autumn leaf with no purpose but to decay. The latter piece pairs well with Lightshadow-trembling (1993) by Gergely Vajda, a student of Eötvös whose embodiment of title feels like a narrative too restless to contain.

This is, in the end, what connects all of the above: an uncontainable feeling to be experienced.