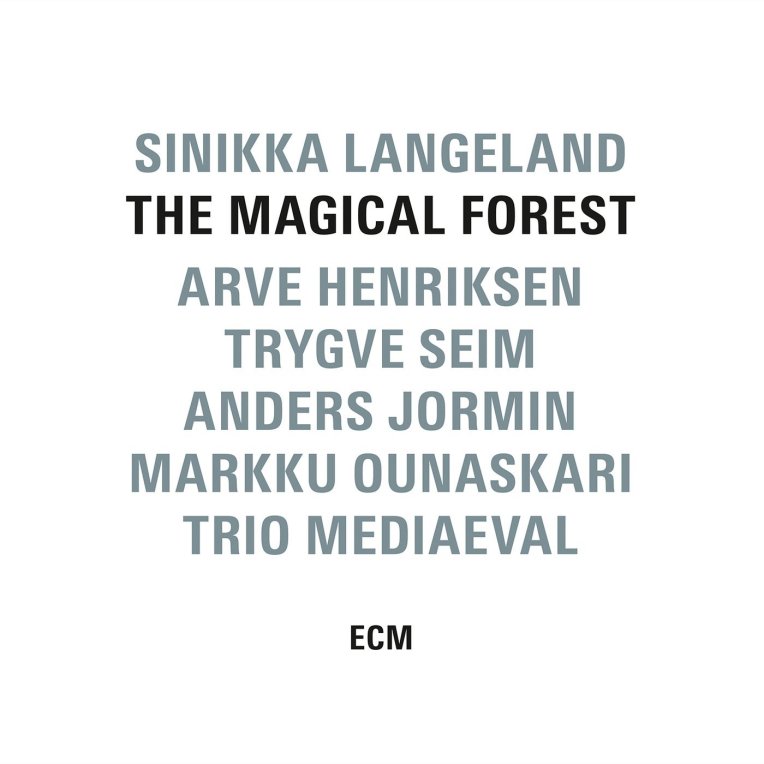 On The Magical Forest, Norwegian kantele virtuoso Sinikka Langeland reconvenes her “Starflowers” quintet (with saxophonist Trygve Seim, trumpeter Arve Henriksen, bassist Anders Jormin, and drummer-percussionist Markku Ounaskari), adding to that quilt the patchwork of voices known as Trio Mediæval. Any of these names will be familiar across the spectrum of ECM followers, but their shared love for Scandinavian folk music has never been so clear as in this latest project.

In contrast to previous albums, the kantele is a largely supportive presence, almost airy in its backgrounded-ness. This gives Langeland’s unaffected singing—and, more importantly, the imagery laced into it—room to roam. Of central significance in that regard is the sacredness of space. Not only in the immaterial sense, but also in the physical landscapes of nature at large and their shaping of reality as we’ve come to understand it over millennia of spiritual seeking.

The album’s opening trifecta sets its thematic charge as the rising sun ignites the day into breaking. “Puun Loitsu” (Prayer to the Tree Goddess) is based on a rune song text from the Finnskogen, or Forest Finns, whose migratory settlements in Norway and Sweden have become reliquaries for creation myths and other origin stories, glistening anew in the varnish of Langeland’s diction. The wiry strains of the kantele offer hints of song, which emerges first in monotone before being taken up in Trio Mediæval’s chanting response. “Sammas” crystallizes the running theme in its evocation of the “world pillar” (axis mundi), a column of infinite energy binding Heaven to Earth and circling around the North Star. The lyrics, with their Trinitarian framing, demonstrate one way in which Christian elements have found their way over the centuries into these mystical traditions. The light-bearing qualities of Henriksen’s trumpeting deepen these underlying messages, which “Jacob’s Dream” makes even more apparent. This retelling of the biblical Patriarch’s vision emphasizes the permanence of verticality over the fleetingness of horizontality. The “ladder,” then, is not climbable by the body but constitutes the body itself: a DNA helix spun from godly breath. Once the words are sung, the instrumentalists brilliantly unravel an improvisational second half. Seim’s tenor and Henriksen’s trumpet move in tandem, drawing rungs between them as they travel.

Trees continue to dominate the landscape in “Køyri” and “Karsikko.” The latter, which names a memorial trunk on which the names of the dead are carved, is based on a variant of the hymn “I Know of a Sleep in Jesus’s Name,” and Langeland’s communications with Henriksen make for some picturesque unfolding in both songs. “Pillar to Heaven” likewise strengthens an interconnectedness of things.

As so often happens on a Langeland album, animals figure heavily into the symbolism of The Magical Forest. “The Wolfman” recounts a man named Johan who, according to legend, lived as a wolf yet died as a man. The inseparability of soil and sky resurfaces, as Ounaskari’s cymbals seem to scale the clouds. “Kamui” takes a relatively documentarian turn in its depiction of Hokkaido, Japan’s indigenous Ainu, whose annual ritual killing of a bear cub is described in empathetic detail, while Trio Mediæval intones the titular “Kamui,” an Ainu word meaning “God” and referring to both the sacrifice and the deity honored by it. This leaves only the title track, an instrumental foregrounding the bird-like calls of Seim (now on soprano saxophone) and Henriksen while Jormin’s arco bassing slithers in the underbrush.

All of which makes me think that the album’s title is somewhat misleading. For indeed, what the listener encounters here is not a forest that is magical but a magic that is forested.

(See this article as it originally appeared in RootsWorld online magazine here.)