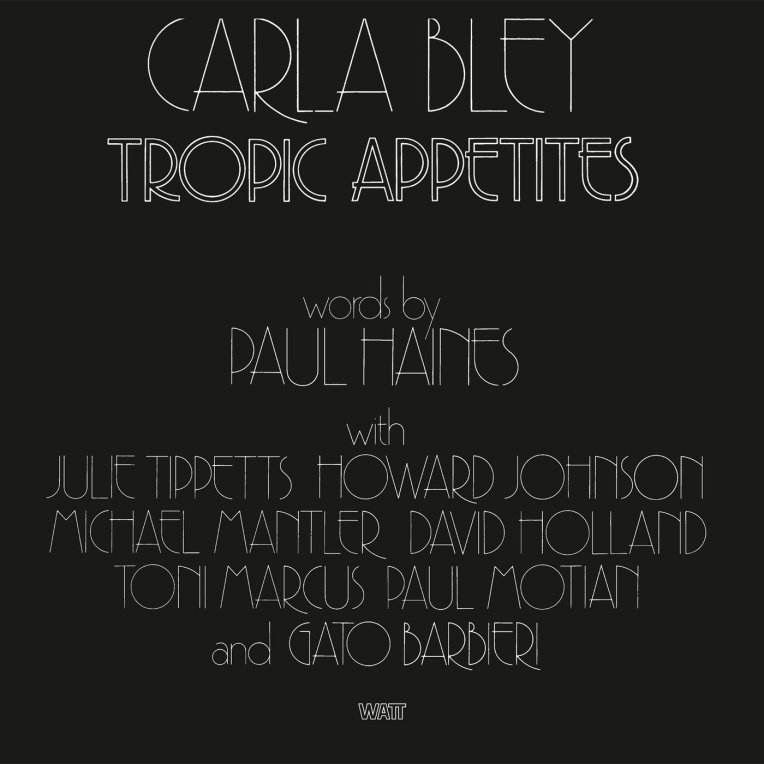 Our storybook adventure through the entire catalog of WATT WORKS—the sublabel endorsed by ECM to showcase the work of Carla Bley and Michael Mantler—begins with Bley’s classic prologue, Tropic Appetites. The pianist, composer, and arranger leads a stellar cast of characters in this richly textured slice of jazz theater. Given the fact that Bley’s music has always been so well-traveled, it’s no wonder that her first WATT outing should be so geographically far-flung, setting poems by the late Paul Haines (1933-2003), whose experiences in Southeast Asia inspired the words sung here by Julie Tippetts. Joining them are tenor saxophonist Gato Barbieri, multi-reedist Howard Johnson, Dave (credited as David) Holland, Michael Mantler on trumpet, Paul Motian on drums, and Toni Marcus on violin and viola.

The album’s subtitle (“It’s Rude To Point Your Food At Anyone”) reveals an obvious thrust: the theme of imposing one’s culture on others who might not share it. This sentiment is duly expressed in the opener, “What Will Be Left Between Us And The Moon Tonight?” As Bley’s piano and Motian’s percussion phase across a night sky of bass and tenor, we are taken on a locomotive ride through landscapes of carnal urges and fragrant trees. Holland is superb in this early appearance, lighting our way before the piece pulls steaming into Free-for-All Station.

Much of what follows happens on foot. Whether trekking “In India” or facing “Enormous Tots,” a darkly whimsical worldview guides our way. The latter hands Johnson an evocative passage about snakes and overgrowth, as grungy guitar, bass clarinet, and brass jump from free jazz to carnivalesque at the drop of a hat amid lyrics that explode any vision we might have of childhood, fantasy life, and play. Motian and Holland (on bass guitar) hack their way through with machetes of rhythm. Stripped of artifice, romanticism, and Orientalist trappings, they present us instead with a taste of the earth and of the human condition. “Song Of The Jungle Stream” places us in ancestral territory. Barbieri (the de facto soloist of Bley’s early period) fans catharsis out into a hush of urban cool. Then there’s the unforgettably titled “Indonesian Dock Sucking Supreme,” in which Tippetts and Johnson lob their forces in a context of larger others. Barbieri is once again incendiary. Our tour ends in “Nothing,” a surreal mélange of tango, funk, processional, and a host of other genres.

Along the way we are fortunate to lift off into the air for two spells. First is “Caucasian Bird Riffles,” which reaches through our throats and pulls out something we’ve never seen before: a version of ourselves laid bare for all foreign eyes to see. Thus does travel gut us by removing our egos from the center of things, thus hanging a question mark over the center itself. In this regard, Mantler’s trumpet draws an orbit of self-reckoning. Second is “Funnybird Song.” It’s worth noting that every track on this album bears dedication to a person or collective, and in this case it’s Swallow who gets the nod. (Little did they know this gesture would plant a seed of love—but we’re getting ahead of our story.) A seven-year-old Karen Mantler, Bley’s daughter by Michael, provides guest vocals for this charming little number that, like the album as a whole, polishes exotica until it reflects us critically in its surface. 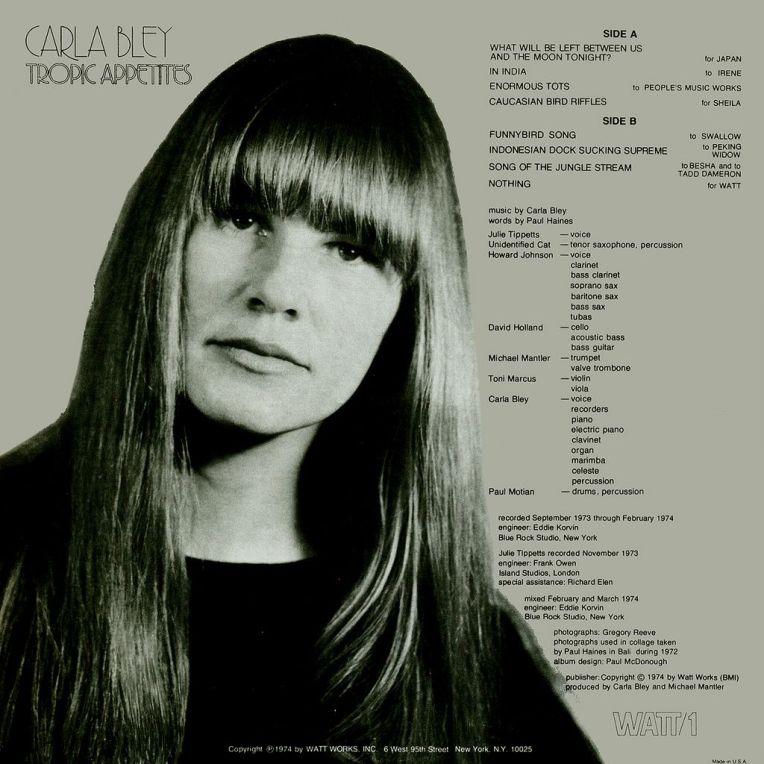