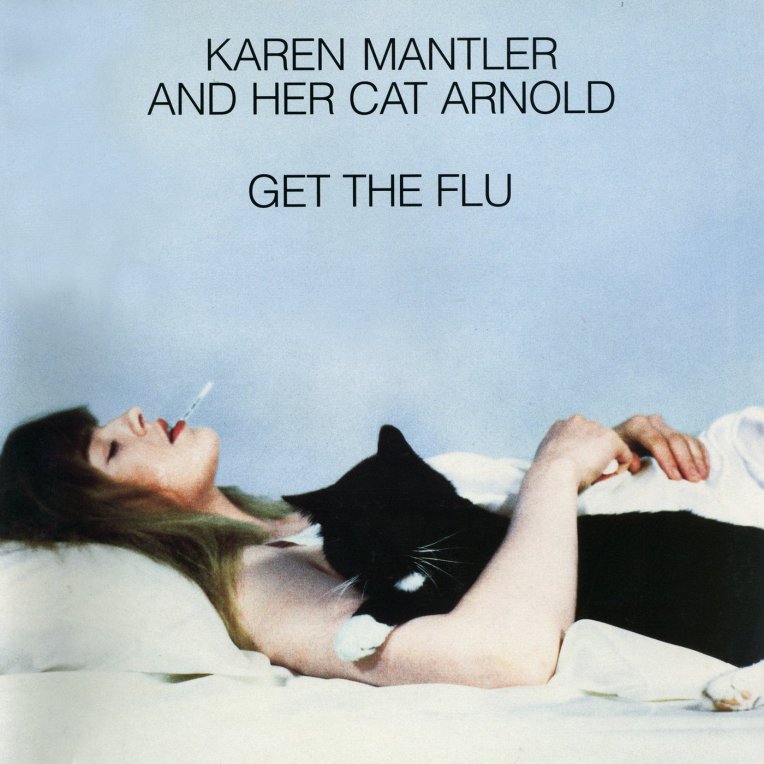 Karen Mantler And Her Cat Arnold
Get The Flu

So begins the second album from Karen Mantler who, in her inimitable blend of melody and spoken word, goes on to tell us of her battle with a virus her doctor dubs “Shanghai A.” In relating our own experiences to her feverish delirium, evoked with filmic veracity by keyboardist Steve Weisberg and baritone saxophonist Pablo Calogero, we find ourselves connected to the strangely brilliant goings on. The band’s voices, as well as Arnold’s meow, emerge as a chorus, sending us off into the remainder.

Within that remainder, noteworthy vignettes abound. Foremost is “I Love Christmas,” which contains some of her cheekiest dialogue. From its opening line (“Everybody knows that Santa Claus is dead”), through its evocation of holiday blues (“Don’t you know it’s just a scam to make you spend your cash, and more suicides are committed then”) to Mantler’s banter with vocalist Eric Mingus (to whose derision she retorts, “But they make you eat moldy fruitcake”), this is a sly antidote to what is for some the loneliest time of year. The carnivalesque “My Organ” is another standout for expressing an in born love of music, and in it Mantler emotes via the titular instrument with the conviction of one who puts her money (what little of it she has) where her mouth is. Organ and harmonica play vital roles in “Au Lait,” stitched together by the rolling snare of Ethan Winogrand and guitar of Marc Muller. And then there’s the unsettling “Waiting,” an attractively woven tapestry of impatience and secrets.

If not already clear, the clouds hanging over these tunes are not quite as dark as they were the last time around, though the scenes played out in “Let’s Have A Baby” and “I’m Not Such A Bad Guy” remind us of past relationships. Whether exploring sickness as a metaphor for irreconcilable tensions in “Call A Doctor” or sending the everyman packing in “Good Luck,” Mantler is a constant voice of reason in an unreasonable world. Like the harmonica that sings so resolutely at her lips, her words cut through the noise to the cold reality of things. Neither is she immune to poking fun at herself, as in a new version of “Mean To Me,” in which her band derides very harmonica solo, when in spite of it all we know just how clairvoyant it can be.