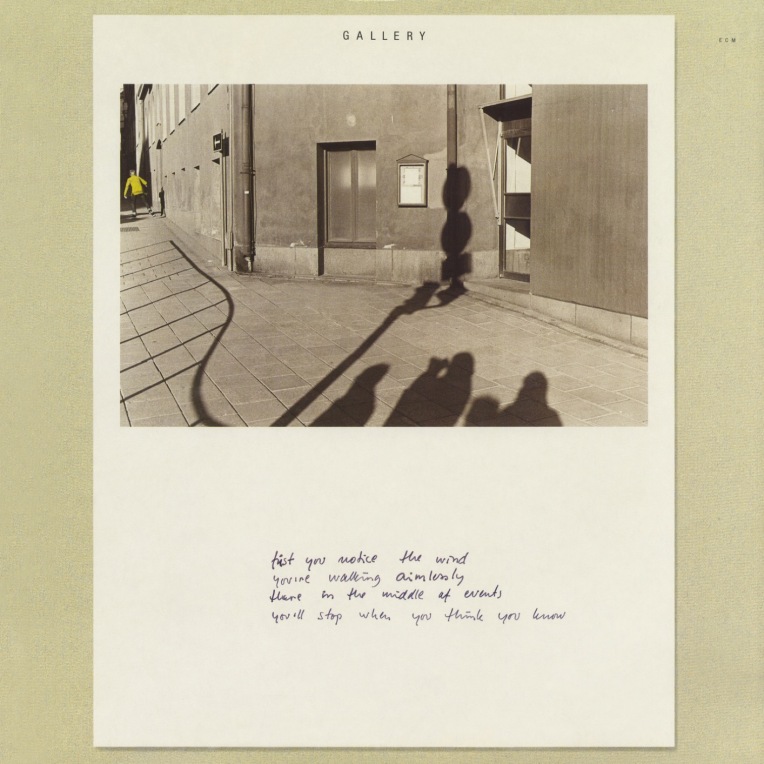 Another enigmatic outlier in the land of the as-yet-to-be-reissued, Gallery follows in the tender footsteps of First Avenue. Its talents are immediately sent skyward in “Soaring,” where the sprightly vibes of Dave Samuels find complement in bassist Ratzo Harris and cellist David Darling, both of whom roll off Michael DiPasqua’s delicate snare and cymbals like words from a poet’s tongue. Darling takes some of the album’s most gorgeous improvisatory turns here. His fluid lines continue in “Prelude,” a duet with Samuels that shares the same breath with “A Lost Game.” The latter is transitory, not unlike the album as a whole, playing out especially in the rhythmic crosspollination between vibes and drums, slung ever so delicately by the bass’s curves. Paul McCandless lays the gold foil of his own beauties with a soprano sax solo that takes this configuration to greater heights, surpassed only by the reflective cello that follows. “Painting” sounds like a Gavin Bryars ensemble piece, unfolding into the remnants of a Morton Feldman dream before awakening in the harmonic contract of a “Pale Sun.” On then does the “Egret” drop us in limpid vibrations, where only a hushed “Night Rain” shows us the final trail.

As the album’s title indicates, this music offers a row of artful images. Yet rather than guide us through a linear passage of creative relics, it brings that passage to us, so that we need only observe…and listen.

Double Image was the intermittent project of Davids Friedman and Samuels, whose vibes and marimbas found likeminded company in session musicians Harvie Swartz and Michael DiPasqua on Dawn, the second of only three albums for the group and their only for ECM. Having two jazz percussionists in the same space was something of a rarity in the late seventies, when the album was recorded, and perhaps contributed to its being swept under the carpet over time. What we have, however, is a smooth and airy set of four extended pieces more than worthy of a reissue.

Every gesture therein is artfully considered, as demonstrated to delightful effect in the opening “Passage.” Swartz’s buttery soft bass adds girth to the Friedman/Samuels nexus, where light and darkness walk hand in hand. While DiPasqua baits a hook for every loop, vibe notes hang like keys from a chain, swinging in a steady hand with a pleasant jingle. For the final stretch, marimbas smoke from a flame of cymbals before vibes recap with a sublimely resolute chord. These plaintive measures continue in “The Next Event,” where the marimba broadens its wingspan into “Sunset Glow.” And as that honeyed bass trickles slowly back in, the shaded sound is fleshed out into a colorful fan of sunrays. Swartz beatifies the final “Crossing,” which, over a steadily popping snare, flows with calm virtuosity before breathing down the neck of finality.

This album makes a fine addition to any mallet enthusiast’s collection and proves that, even as its drowsiest, ECM quietly towers above the rest. A personal favorite among the label’s painted covers as well.