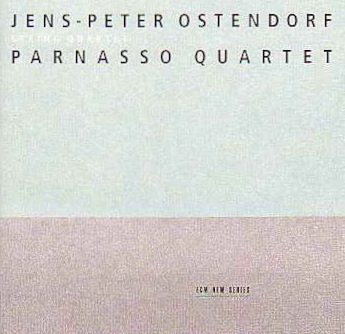 One can only hope this album will serve to heighten our awareness of Jens-Peter Ostendorf (1944-2006), a German composer whose music might otherwise be relegated to digital oblivion. Ostendorf was born in Hamburg, where he studied music and became a freelance composer. He worked with Karlheinz Stockhausen, scored films, and served a stint at IRCAM. All of these experiences deeply inform his richly varied corpus, of which the string quartets are the heart. On this disc we are treated to an all-too-rare and superbly rendered performance of his Second String Quartet. It remains a well-aged example of the anti-formula, the vow of silence lurking behind the full-blown sermon. Over three long movements, the instruments work as a whole, with only the rarest bursts of tension. The notes are light and airy and galactic in reach.

Those wary of modern classical music should find themselves on relatively safe ground here. Unlike some of Ostendorf’s orchestral and ensemble pieces, this quartet is fragile and unassuming, strangely melodic and transcendent, and wrapped in a sound that is sparse yet hauntingly detailed. If anywhere, its challenge lies in its extended pathos and seeming lack of development. The effect is anything but cumulative, if only because such an approach would spoil the delicate balance it so deftly maintains. Ostendorf’s is a music of broken circuits, a cosmos made all the more beautiful for being out of order. Fans of Stockhausen should feel at home, as might anyone with an open ear.