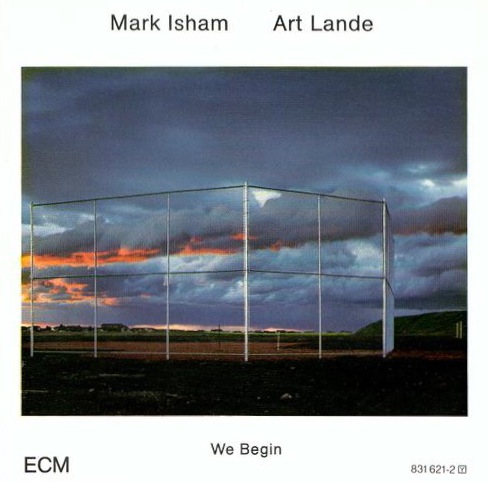 “All art is at once surface and symbol.”
–Oscar Wilde

This brooding session from Rubisa Patrol alumni Mark Isham and Art Lande is an odd one. Odd, because with the immensity of acoustic talents to be found in both musicians, the results tend toward a saccharine blend of electronics that detracts from the heavenly beauties being painted before them. Take, for instance, Isham’s swaths of trumpeted gorgeousness in “The Melancholy Of Departure,” which are at pains to harmonize with the drum machine that is the piece’s frail backbone. Neither does Lande have reason to augment his resonant pianism with the synthetic gamelan that deadens “Ceremony In Starlight” when he might have further explored the inside of the piano for similar effect. And are not Isham’s muted calls here far more cosmic than a few patching of wire ever could be? The same goes for the title piece and for the closing “Fanfare,” in which Isham might easily have multi-tracked himself (as he does later on) in lieu of the thin choir that we get.

Lande’s piano becomes more prominent as the album progresses, most effectively so in his tender solo piece, “Sweet Circle.” All the more ironic, then, that the live feel of “Lord Ananea” never quite gets off the ground. “Surface And Symbol,” on the other hand, is as transcendent as transcendent gets. One only wishes this veritable flower of layered horns, echoing like voices of ages past, and veiled pianism were more representative of the whole.

In spite of this album’s shortcomings, the melodic pictures it paints are so downright beautiful that one can forgive its cheap gilded frame. And far be it from me to criticize what was then an exciting new tool of the moment. Neither a must-have nor one to ignore. I’ll leave it for you to decide where it falls.