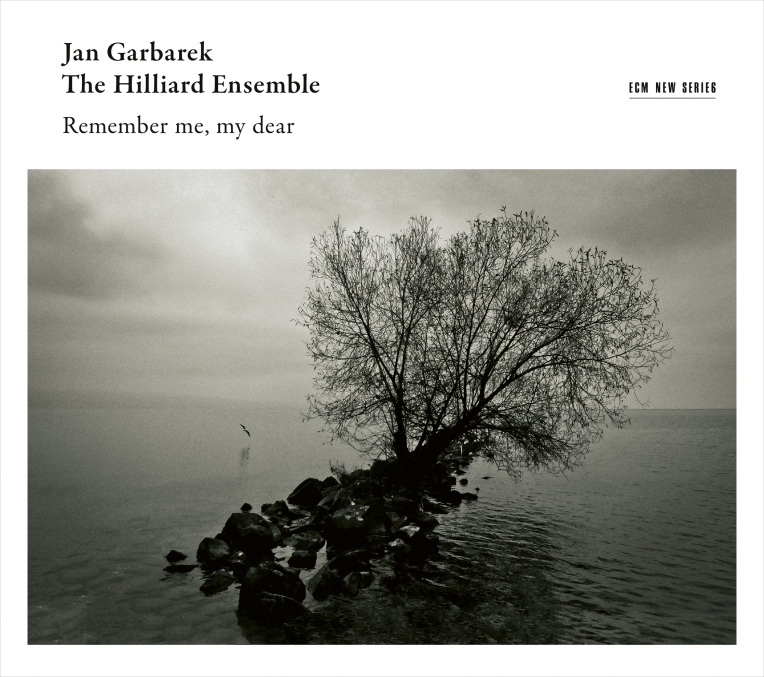 Jan Garbarek
The Hilliard Ensemble
Remember me, my dear

When the Hilliard Ensemble and saxophonist Jan Garbarek first recorded for ECM in 1993, they opened as many—if not more—forces than they joined. It was a collaboration not only between each other, but also between them and engineer Peter Laenger, the Austrian monastery of St. Gerold, and producer Manfred Eicher, whose vision was so attuned to the possibility of it all that he would seem to have heard it in his head before those five breaths intertwined in reality. Twenty-five years after the release of their self-titled debut, the Officium project resurfaces with this document of their final performance in 2014.

The roots of this program’s oldest branches may be traced to the soil of past albums. In the opening “Ov zarmanali,” a hymn of Christ’s baptism by Komitas that was likewise our doorway into Officium Novum, Garbarek’s keening soprano is unmistakable in shape and color. In this setting he plays with the decay of notes, sharing more with sitar virtuosos than other reed players and taking into account every incidental effect as physical material for expression. It is the Hilliards, then, who enter into his delineation—not the other way around—and who plow a field just as ancient in preparation of a hybrid crop unlike any other. This progression is reversed in “Procurans odium,” one among a handful of anonymous medieval pieces that finds its seeds, split with time, restored in the nourishment of resuscitation. Garbarek’s role is nevertheless fully dimensional, drawing out from within rather than applying from without. Other unattributable turns, such as the wondrously ambient “Procedentum sponsum” and more lilting “Dostoino est,” speak to the power of memory. And in the “Sanctus,” not heard since their debut, we find a folding inward rather than expansion of concept.

Beyond the category of performer, Garbarek’s contributions fall under composer and arranger, finding solace all the same in this sanctuary. In the latter vein is “Allting finns,” wherein his exploratory nature is particularly evident, as one can feel Garbarek roaming the church in search of stone and warmth, while his setting of the Passamaquoddy poem “We are the stars” draws an unbreakable thread from one corner of the earth to another, likewise itinerant in spirit.

From the liturgical, as in the light-through-stained-glass effect of Nikolai N. Kedrov’s “Litany,” to the repentant shading of Guillaume le Rouge’s “Se je fayz deuil” (gazing back to Mnemosyne), the vocal nature of Garbarek’s saxophone and the reed-like qualities of the Hilliards have perhaps never been so dimensionally interchangeable. For even when the saxophone is absent, as in a most intimate rendition of Arvo Pärt’s “Most Holy Mother of God,” its soul lingers—a dream upon waking. The effect is such that, even when turning the brittle pages of more familiar material, like the “Alleluia nativitas” of Pérotin or the “O ignis spiritus” of Hildegard von Bingen, we are welcomed in the spirit of newness. And so, in the 16th-century Scottish folk song we find more than a title, but a poignant reminder that our minds are at once the tenderest and most robust vessels for honoring the past. For how can we not remember the impact this quintet has made on modern music, and the love with which listeners will continue to fill its crater for ages to come?