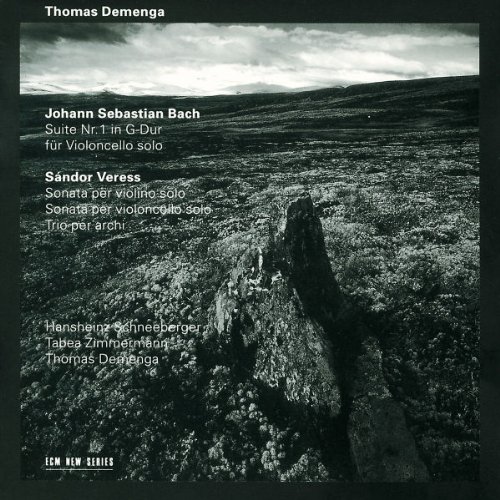 Although this album is the second of five on which cellist Thomas Demenga boldly pairs the cello suites of J. S. Bach with chamber works from modern composers, it was the last to reach my ears. As a longtime admirer of Sándor Veress—whose music I discovered, no less, on Heinz Holliger’s champion recording for ECM—I was excited to sit down and mull over this disc at long last.

Under Demenga’s bow, Bach’s Suite No. 1 for Solo Cello in G Major flickers with candlelit intimacy, honed like the wood from the instrument through which it emotes in that distinct and mineral tone. One imagines the room where it was first practiced, walls dancing in a quiet play of light and shadow: the player’s arched head, swinging hands, lithe fingers curling about the neck of the one who sings. As to the later suites, Demenga brings a unique mix of fluidity and rusticity to his sound, but above all pays attention to negative spaces in a way that any accomplished Bach interpreter must. We hear this in the pauses of the Courante and in the substantial attentions of the Sarabande, which he suffuses with a downright soulful air. And through the subtle dramatic shape he imparts to the Menuets he dances his way to a reflective brilliance in the Gigue.

With this perfect tetrahedron so thoughtfully folded before us, Veress’s 1935 Sonata for Violin may seem to break the symmetry. Yet the sonata, among Veress’s first published works, more importantly reveals an economy of notecraft on par with the Baroque master. Its slow-fast-slow structure betrays a more complex and organic geometry that begins with a jig of Bartókian proportions and seeps through the Adagio’s quicksand, only to rise again, grabbing the tail of gorgeous gypsy air into the fresh air of the final leap. Violinist Hansheinz Schneeberger, who made his ECM debut with Demenga on the latter’s first Bach pairing, plays this jewel with an intensity and focus familiar to anyone who enjoys Kim Kashkashian’s take on solo Hindemith. Despite the meager comparisons I’ve attempted to draw to other such composers, this music thrives with a forward-looking robustness all its own.

The light at the end of this tunnel comes in the form of Veress’s Sonata for Cello. Composed in Baltimore, the 1967 piece also takes a three-movement structure, this time marked “Dialogue,” “Monologue,” and “Epilogue,” which, as Holliger notes in an accompanying essay, takes us through an inner turmoil on the path toward self-liberation. For me, the most solitary movement is the Dialogue. Its dirge-like density betrays an ecstatic turmoil while keeping a hand cupped to the ear of some cherished and unrecoverable stillness. By contrast, the Monologue seems almost resolute as it traces fingers blindly through the ashes, from which the final movement rises in its own agitated way with assertion on the tongue. As a student of Veress, Holliger no doubt took on some of his mentor’s quirks, and the influence of said Epilogue rings clearly in Trema.

Violist Tabea Zimmermann joins the roster for the Trio for Violin, Viola and Cello, backing us into 1954. The 20-minute piece takes two movements, the first of which moves like molasses into a dulcet and spectral territory ahead of its time, while the second brings the patter of urgency to a journey of immense detail and brilliance.

Of this journey the lowly reviewer can make no definitive claims. Naysayers of the modern may make a delightful discovery or two along the way, even as they cling to Bach, while defenders of the twentieth century will immediately recognize that its music would be nowhere without him. Either way, I can only commend Demenga and ECM for an ongoing commitment to bring their programming alive with the benefits of (im)possibility. 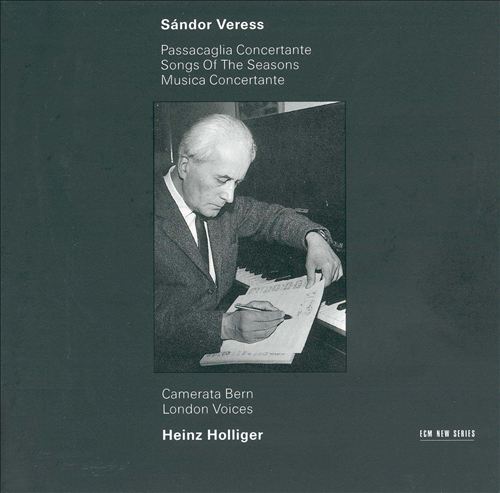 I set off from my beautiful fatherland,
My little, glorious Hungary.
Halfway, I turned and looked back
And my eyes were filled with tears.

Hungarian-born Sándor Veress (1907-1992) is a sadly neglected figure in modern music. Despite his pupilage under Bela Bartók and Zoltán Kodály, and even his succession over the latter as professor of composition at the Budapest School of Music in 1943, Veress has never attained the same international recognition as his two most successful compatriots. One might blame his preference for solitude or his idiomatic methodology for keeping him in obscurity. Yet as one who made the most of his outlier status and ideological exile, he seems never to have been one to wallow in self-pity. Exposed to much of the folk music that also captivated his mentors, Veress nurtured that same spirit when sociopolitical upheaval exacerbated his emigration to Switzlerland in 1949. Whereas Kodály in particular saw cultural preservation as central to the musical act, Veress saw it as an incision to be teased open and unraveled.

Veress was as much a giver as he was a receiver of compositional heritage, and himself provided valuable tutelage throughout his career to such pioneers as György Ligeti, György Kurtág, and, most significantly here, Heinz Holliger, for whom the opening Passacaglia Concertante (1961) for oboe and string orchestra was written. Veress’s fondness for the oboist extraordinaire is palpable in every measure of this impassioned recording. The first plucked string is like an idea dropped into water, from which viola-heavy interpretations issue with the force of an approaching storm. The meticulous Allegro scherzando is an enthralling realization of concise melodrama, while the relatively protracted third movement maintains a dark tension throughout, ever heightened by Holliger’s circular sustains and tonal acuity. The piece’s somber ending leaves us with much to ponder as we wander into the seven madrigals known as Songs Of The Seasons (1967). These mixed choir settings of poems by Christopher Brennan (1870-1932), an Australian poet whose lack of affiliation and anti-lyricism primes him for the clustered treatment he receives here, are rife with potent themes: dreams and the fragility of time and place, the musicality of the body as an emotive instrument, the ever ineffable springtime, sunlight as soul and its expansion into the oneness of all, and flickering images of a past love all intermingle in a playful exposition of language. The “sweet silence after bells” of Part IV is especially redolent, and in it one can hear shades of Holliger’s own vocal writing just two decades later. Where the Songs are effervescent and whimsical, the Musica Concertante (1966) for twelve strings is highly centrifugal. As a chamber work modeled after Bach’s third and sixth Brandenburg Concertos, it looks beyond its own formulaic outline even as it cowers within it, happily merging disparate streams and leaving us with a river to be reckoned with as we continue to wade against the current of an unrelenting music industry in which such voices are all too easily forgotten.