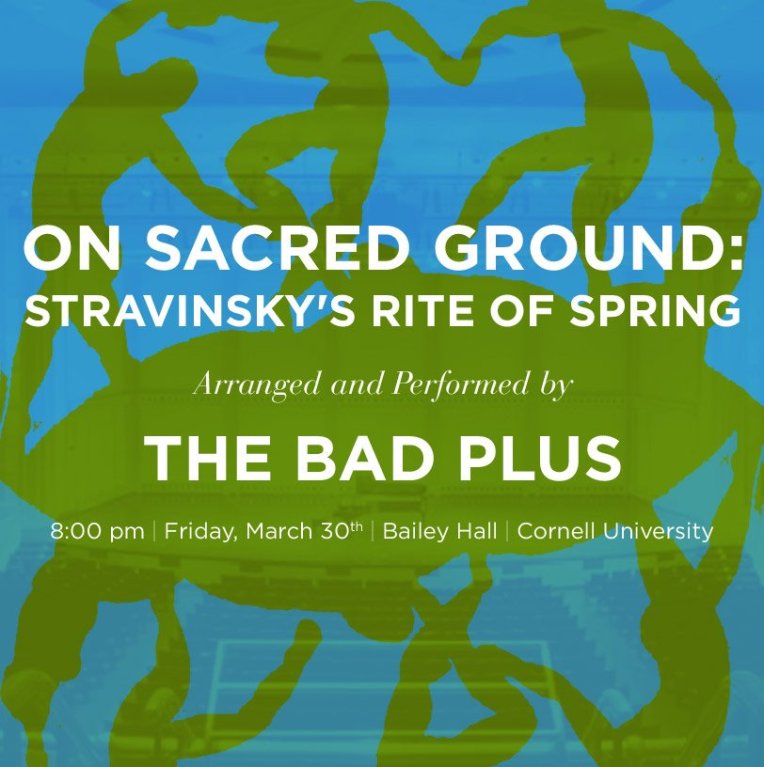 As a reviewer, my job is twofold: 1) to introduce artists to those who may not be familiar, and 2) to wax informative on the art they bring to studio or stage. The latter comes naturally. The former is where my pen begins to drag. Sure, I can mosey on over to any number of online bios and tell you that bassist Reid Anderson, pianist Ethan Iverson, and drummer Dave King—known collectively as The Bad Plus—have been wowing the discerning listener since the group’s 2000 redux. Sprung from the bedrock of Minneapolis (with Iverson’s biographical thread stretching back to neighboring Wisconsin), TBP lay their matches to a wealth of fuses, including a heaping portion of group originals and a smattering of enticing sidelines drawn from the popular canon. TBP now bring their latest project, “On Sacred Ground,” a reimagining of Igor Stravinsky’s The Rite of Spring, to Cornell’s Bailey Hall.

But does any of this tell you who Iverson, Anderson, and King really are? If you weren’t at the show (in a word: invigorating), then what service can these words glowing on your screen possibly bring to transient eyes? We can be thankful, then, that TBP is not the kind of outfit to hide behind publicity in lieu of interacting with fans, other musicians, and the errant reviewer whose starry considerations need not sugarcoat the already inexpressible. Out of graciousness and an abiding interest the spontaneity of open conversation (and what is jazz if not?), TBP participated in a Composer’s Forum on campus the afternoon of. 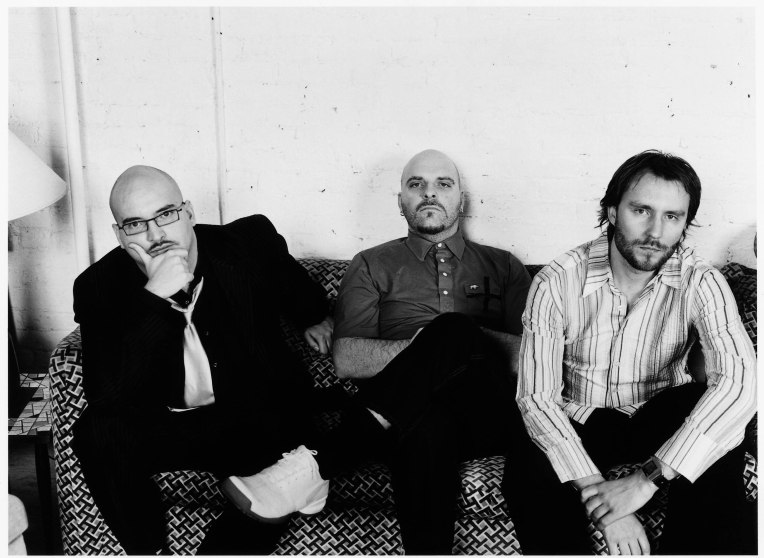 “Where are we in this?” posed King in reference to the band’s initial approach to Stravinsky. The transparency of their trial and error, of their frustration over and acceptance of the music, was refreshing. Of course, many words were spilt over the Classical vs. Jazz question, but by the end of the 90-minute discussion the trio had mopped them all up with one sentiment: “It’s honest to us.” They weren’t acting, King went on to say, but simply “playing our music.” Thus engaged, the band could discard the quibbles of classical expectations in favor of a feeling, of a kick and a smile, and steep both stage and audience in “the obviousness of how good everything is,” which is for them the heart of jazz.

It comes as no surprise that King was so adamant about integrity, for one imagines his challenge in the Stravinsky nexus to be the greatest of all: How does one bring out the rhythmic challenges inherent in Rite without coming across as “square”? Their solution was to approach these challenges from the inside out, laying the piece down before imagining what they could do with it. Working from the piano four hands arrangement, they began to see the Stravinskian tools they’d already been using in their own. Anderson expanded these sentiments by making a case for irreverence. In not being beholden to particulars, they could be true to the piece in a fundamental way. What was there, beyond and within the score at hand? How did their assimilation fit and what could they hear in it? To play a high concept piece like Rite, they realized, one needs to be an improviser. Score one for the away team.

Yet even with the orchestral peel and improvisational feel, how does one bridge the gap? Iverson’s answer: chamber jazz offers the guarantee of always hearing a voice. Consequently, instrumentation was not so much an issue. More important was maintaining faithfulness to a sense of communal spirit through the composer’s art. In this vein, Iverson admitted to a preference for older jazz recordings, which read for him more like folk music. In other words: freely. The goal in taking Rite was to give shape to those notorious rhythms in an attempt to move something forward. 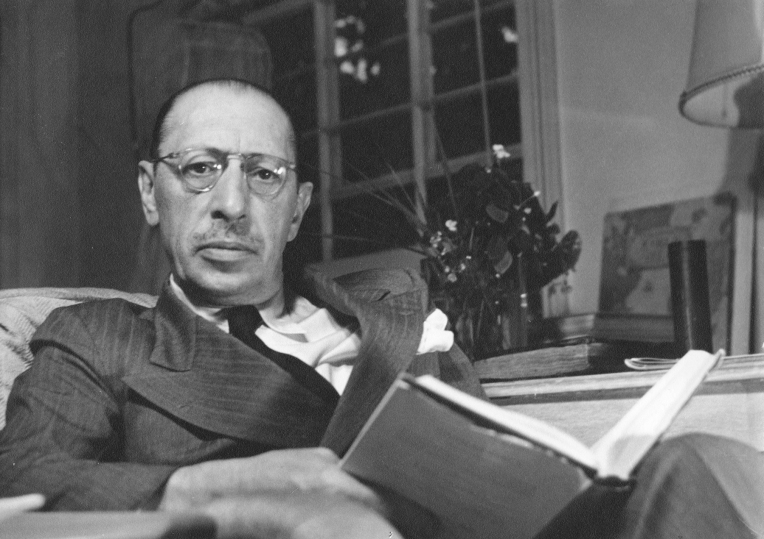 Despite the lore surrounding its shocking 1913 premier, it was less the music and more the choreography (in combination with other social factors) of Stravinsky’s defining opus that induced the infamous riot that ensued. And sure, the structures are complex, the dissonances still formidable, but one would hardly have known it by the sheer exuberance with which TBP played it, for its outside-the-box aesthetic proved to be a smooth fit for the band’s avant-garde proclivities.

The performance was further enhanced by snazzy lighting design from architect Cristina Guadalupe and video from filmmaker Noah Hutton (all of these were cued in real-time response to the musicians). The imagery added an arguable dimension. On the one hand, it provided some moments of illustration, while on the other I found that it distracted from the decidedly acoustic processes unfolding before us. Either way, I appreciated those moments when sound and image fused well—in particular, in the movements of dancer Julie Worden, whose filmed body brought a taste of Nijinsky to “The Sacrifice.” Also effective was the opening sequence, a teetering journey through a melting winter landscape amid a collage of what sounded like manipulated scratchy LPs of Rite’s famous opening bassoon (familiar to anyone who’s seen Disney’s Fantasia and its churning creation sequence). Only now the bassoon line was intoned through the piano’s harp strings, toying with its own galactic edges in a swirl of resonant chains.

All of which made the band’s implosive entrance all the more exhilarating. The boom of that unified hit showed us just how dynamic a piano trio can be. Right off the bat, Anderson’s bass was a clear winner, especially in the distinctive refrains shared with Iverson. His slinking phrasings foreshadowed the more incendiary moments of cohesion, even as Iverson spread his fingers wide to capture every nuance he could. With King their language was even more lucid, and as a unit they translated the muddiness of it all with gritty, tactile clarity. Indeed, the presence of drums proved to be a guiding force in the fusion before us, seeming at once to react to and dictate the goings on.

TBP captured the freshness of a first hearing, such that even (if not especially) those of us familiar with the score could nod anew at the novelties therein. The shadows loomed somehow darker, the exuberances somehow brighter. And when the projection screen rose to bathe the audience in a vivid red light for the final dance, we were fully hooked in to the vibe they’d so diligently communicated.

TBP’s sacred ground was exactly that: a hallowed moment of music history poured into a bed of firewalking coals, still glowing. The playing was as gushing as the season it sought to evoke. The ultimate success, then, was whether or not the listener liked The Rite of Spring to begin with (my wife, for one, does not, but nonetheless appreciated the care and immediacy of the interpretation). One can only hope that those hearing it for the first time will have found doors newly opened.

“Thank you, that was a song by Igor Stravinsky,” said Anderson after this marathon introduction. With the ice of that intensity now broken by laughter, the band was ready to show us a different facet of its honesty, for now it was time to put away the music and dive into some originals. 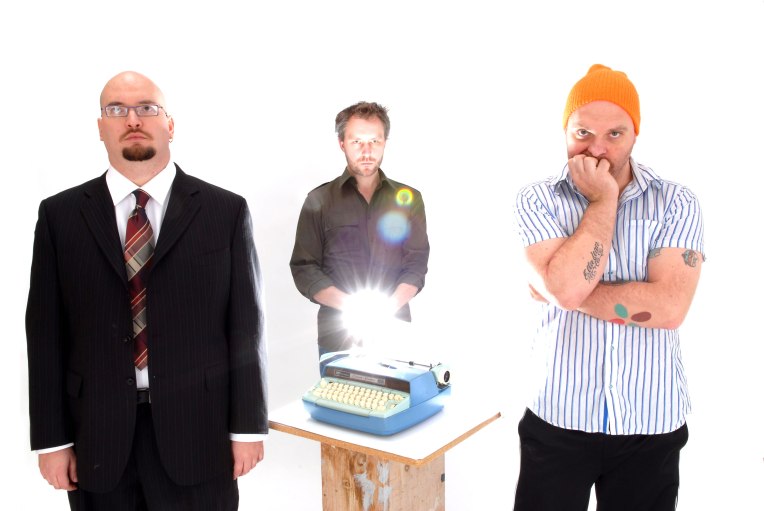 First on tap was a jog around the memorable bass line of “Giant” (off their 2007 joint, Prog), which enchanted with its leapfrogging tenderness. Now in the absence of film, the cinematic qualities of these three talents came shining through with unstoppable vigor, glittering behind the veneer of Iverson’s downright oceanic pianism, riding a crescent moon’s arc into dreamland. This was the first of three tunes penned by Anderson, whose “Big Eater” (see 2003’s These Are The Vistas) rushed headlong into Iverson’s pointillist cascade, while the title cut off their latest, Never Stop, made for a fitting encore. With its hip lyricism and head-nodding charm, it was the perfect pick-me-up to let us down into the night.

Before the standing O, we were treated to two blasts of energy from King. The newish mosaic of staggered vistas and wild pianism that was “Wolf Out” made for a fitting window into its composer’s art. “1972 Bronze Medalist” (a touchstone of the TBP repertoire) was another colorful groove—machine music for the intelligent programmer.

Iverson’s contribution came in the form of “Re-Elect That.” This skittering romp off the beaten politic was like a tight fist uncurled finger by reluctant finger and sprinkled with gunpowder. It also sported King’s best solo of the night—a delicate, breathy thing of brushes and sensitivity—before ending on a John Jacob Jingleheimer Schmidt kind of fadeout.

The requisite cover came from the songbook of Aphex Twin, whose masterful “Flim” opened the trio to some of its most exciting territories. Those first notes had not a few gasping with recognition, leading into more of King’s superbly detailed visions, including a notable moment that found him pulling at the snare wires to get that unmistakable card-shuffling effect toward the end.

A house on fire? Hardly. More like a fire that needs no house to gain purchase. The moment is The Bad Plus’s kindling.

2 thoughts on “Rite On: The Bad Plus Take on Stravinsky and More”