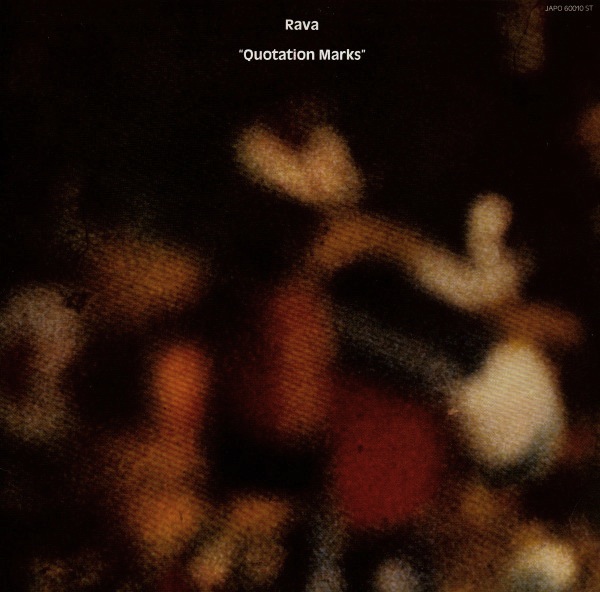 “Quotation Marks” was a milestone for Italian trumpeter, now ECM mainstay, Enrico Rava. In addition to being his first of many projects on Manfred Eicher’s watch, it was his debut as leader. The record blends two sessions into a seamless program. The first (December 1973) went down in New York City, where he was backed by guitarist John Abercrombie, drummer Jack DeJohnette, keyboardist David Horowitz, bassist Herb Bushler, and percussionists Ray Armando and Warren Smith. The second (April 1974) placed Rava in Buenos Aires alongside Radolfo Mederos on bandoneón, Finito Bingert on tenor sax and flute, Matias Pizarro on piano, Ricardo Lew on guitar, and percussionists Nestor Astarita and El Chino Rossi.

Of this fine assembly, Mederos’s sound rings foremost. His lovely bellows open “Espejismo Ratonera” with a lilting air before Pizarro’s smooth pianism flushes its alleys clear for less straightforward melodic explorations. Touches of tango warm the cockles, making for an easy, patient entrance to Rava’s dancing grammar. Youth and joy are obvious in his playing, which by a clever turning of the knob bleeds back into the bandoneón with which the track began. American jazz vocalist Jeanne Lee sings lyrics by Argentine poet Mario Trejo in the “Short Visit To Malena” that follows. It too benefits from studio subtleties, fading in as if we were being escorted from one nightclub to another. We seem to wander in at mid-song and notice the crowd sipping their cocktails, arriving just in time for Rava’s trade-off to Abercrombie. (I cannot help but be reminded at this point, if you’ll forgive the comparison, of “Club Tropicana” by Wham!, which begins outside and plunges the listener into a club atmosphere once the door is opened.) “Sola” throws us headlong into the bounce of the South American band. A flute solo here from Bingert stands as the album’s highlight. Like a light streaking before an open lens, it lingers against the skip of bandoneón and snare. The track fades all too soon, just as Lew catches a tailwind. “San Justo” is another horizontal with dissonant verticals from Mederos and a gritty prison break from Lew. Lee rejoins the cast for the heavenly watercolors of the title track before her cathartic leaps float amid a heady beat of brassy beauty, while in the steady groove of “Melancolia De Las Maletas” she adds flips and dips. All of this gives plenty of ground for Rava to unleash his confidence, handing it over to Abercrombie for a crunchy and edible passage.

We know these musicians are capable of incendiary moves, which renders their restraint (and the occasional burst) all the more intense. Rava especially takes time to introduce himself into nearly every tune. Even those like “Water Kite” cloak him in a deceptively thematic role before asserting his personality at stage center. It is a testament to his maturity as a young player and deference to the talents with which he finds himself. The result is an unspoiled gem in the Rava discography that is more than worth the import price if you can afford it.

As a service to my readers, I’ve taken the liberty of translating the liner notes by Minoru Wakasugi that accompany the 2006 Japanese reissue, especially because the album has since become available far more cheaply via digital download, sans booklet:

Now available for the first time on CD is Italian trumpeter Enrico Rava’s 1973 work “Quotation Marks”, which shuffles together a New York session recorded that same year (tracks 2, 6, 7) and another recorded in Buenos Aires the following.

The story behind the South American session and its journey to CD is as vivid as the music’s colors.

At the very least, we can think of this record as marking the beginning of Rava’s relationship with Latin music. Since the 80s, imprints such as Soul Note (Italy) have boasted similar, richly hued sounds, but among ECM’s productions throughout the 70s there was nothing that so vividly repainted the label’s image. Unable to move about as he’d wished, and in something of a quagmire as he pondered his solo debut, Rava, no doubt inspired by ECM owner Manfred Eicher’s philosophy and the image he’d established, felt this was a good way to go.

Such instability wasn’t unknown to Eicher, as it had defined the young label’s activities thus far. Although that same year saw the production of Jazz a Confronto 14 – Enrico Rava on the Italian Horo label, by then the groundwork had already been laid in a slew of formative records.

And let us not forget his participation in soprano saxophonist Steve Lacy’s 1966 The Forest and the Zoo, also recorded in Buenos Aires. Although that album took him in an entirely unrelated musical direction, Rava’s first South American experience surely stirred the Latin blood lurking within him.

Not long after, he traveled to New York in 1967. In making the transition from the rundown streets of Buenos Aires to those of another metropolis, Rava was baptized in the waters of authentic free jazz. He returned home temporarily, only to find himself back in the Big Apple, by which time seven years had passed. In that period, he’d played with Carla Bley in the pianist-composer’s large-scale project Escalator Over the Hill (1971). Seeing as Bley’s WATT label had direct business relations with ECM, it was perhaps inevitable that Rava would come to know Eicher.

Living in a racial and cultural melting pot like New York placed Rava at world center. It was more than just a dollop of land in the eastern U.S.; it was a crucible of global influences that seeped into every part of the city and led him to Buenos Aires a second time.

He drew up his first South American sketch with Pupa o Crisalide, released on Vista (Italy), known for producing artists like Duško Gojković. Featuring such talents as Italy-based Brazilian percussionist Mandrake, the album was oriented more toward Brazilian fusion than Argentine tango and gained popularity even among the young club crowd. It was also my introduction to Rava.

One can hear from Pupa o Crisalide just how fulfilling his time in Buenos Aires was. He produced quite a few recordings there, and from them a wonderful body of work. “Quotation Marks” was essentially culled from the Vista outtakes.

Uniformity reigns in Pupa o Crisalide. And although the present CD is three recordings in one, laid down in Buenos Aires, New York (alternate takes), and locally in Rome, one can read balance into their triangular interrelationship. The colors are uniform, maintaining as they do a consistent temperature and climate.

On the other hand, it is also a sound-world where, by virtue of its intermingling, warmth and coldness, brightness and darkness butt up against one another, so that their urban commonalities come about through subtle variations. The stability of Pupa o Crisalide, then, no longer applies.

Not that “Quotation Marks” needs it. With Rava’s reverberant blat and tenacity, it obscures melancholy and sordidness, finding among the urban sprawl an inner spiritual world hitherto unseen. It is the same power of spirit that moves the Piazzolla Quintet’s Piazzolla at the Philharmonic Hall New York (1965) and anticipates the “neighborhood music” of Kip Hanrahan (of American Clavé fame) by decades.

None of this means that Rava was necessarily ready to jump the gun as leader, for he inevitably took on the “colors” of his costars, all of whom helped to draw out his magnetic attraction. Nevertheless, he made a huge impression. More than Rava’s skills and such, it was his commitment to a total concept that won listeners over, and the effect was incalculable. The combination with bandoneón was unique at the time, although now it will readily put ECM fans in mind of Dino Saluzzi. It was nothing so original as taking Saluzzi’s unique ambience and meshing it with the unsettling melodies of tango, but still one caught a glimpse of ECM’s innovation for treating the bandoneón as primary actor.

Rodolfo Mederos, who held the key to the South American session, is a bandoneón player of a generation younger than Saluzzi. And while he cherished his instrument as if he’d inherited it from Piazzolla himself, he also formed a rock-leaning band called Generación Cero (Generation Zero), and for a time was involved in activities that would seem to go against the Piazzolla grain. Nowadays we can chalk up these exploits to youthful indiscretion and self-reformation, but we need only look at tango master Osvaldo Pugliese, whose compositions were already heralding a new age of performance, to see their importance.

Ricardo Lew (guitar), Matias Pizarro (piano), and Nestor Astarita (drums), who assisted in Rava’s South American sketches with Mederos, were always looking to attract other local players. Pizzaro in particular was a central figure during this period in promoting and developing “folklorization,” an underground style of Andean fusion. Its effects continue to be an inspiration for modern-day outfits, like France’s Gotan Project, which trace their roots directly to tango. Along with late bombo drummer Domingo Cura (1929-2004), who inspired a reassessment of the genre from behind the scenes, these artists have charted the modernization of Andean music. We may not lay the same claims on “Quotation Marks”, but because we’re unveiling the album at this historical moment, in 2006, it is important to tease out the effects of everything going on around it. (Translation ©2013 Tyran Grillo)