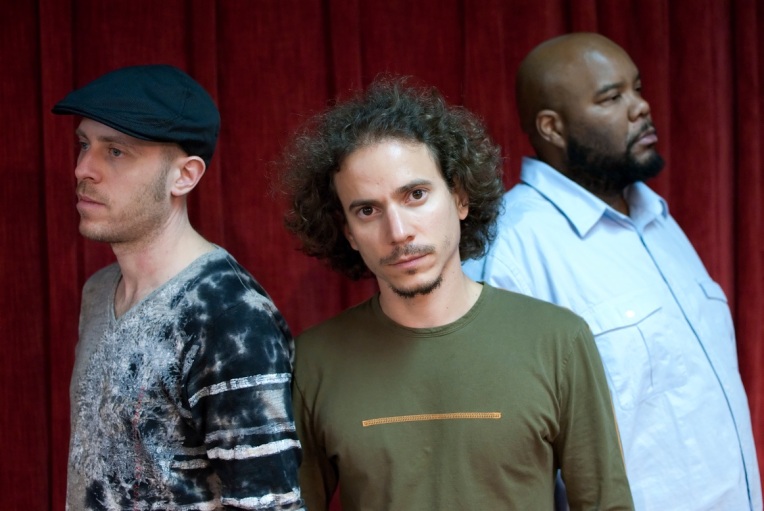 Dafnis Prieto’s Proverb Trio has walked the earth as such since 2009, but one might as well count the past four twelve-moon cycles in dog years: such is the telepathy developed by percussionist Prieto, singer-emcee Kokayi, and keyboardist Jason Lindner. The Cuban-born Prieto and D.C.-based Kokayi first came together in 2004, after which they explored their possibilities as a duo before recruiting Lindner. If the performance at Cornell’s Bailey Hall was any indication, the results must have been explosive.

PT’s entirely improvised experience means what you hear is what you get, and what you get you’ll never hear again. “Generative” is the operative word. These three men share a spark, a molecule of springboard action waiting to bounce. It’s as if they’d been beamed aboard, genetically preloaded with full compositions sleeping in their veins.

Prieto is both heart and soul of the group. Sitting behind a kit as compact as it is colorful, and before a concentrated, engaged crowd, he opened by floating a martial snare down a babbling electronic brook, quickly recalibrated to reflect an inherent combustion. Thus the pattern of exchange, fading in and out until a breakbeat hit the air. And as Kokayi dropped a political Spirograph from his lips, Prieto rode the rim across Lindner’s grander carpet into an hour and a half of chain reactions.

Attempting to list every genre activated would be like counting the stars in the Milky Way. Indeed, the hall was a galaxy halved, faces concentrated front and center and scattering toward the back walls and balcony. From tender infusions of electric piano and indie blues, quasi-reggae vibes to incendiary hi-hat swing, video game jazz to space jams: everything was fair game in PT’s tapas.

Kokayi bled the thickest chips across this poker table. Balancing Bob Marley dialectics with Gift of Gab pyrotechnics, he swung low from a high trapeze. He was, in a sense, another drum, feeding off (and into) Prieto’s locomotion against psychedelic Moog accents. The latter’s alone time cast a S.E.T.I. signal like a fishing line into the nebular pond until it got a bite, freeing the soul of the room through stargate after stargate.

Not all was cosmic dancing, for Kokayi unleashed his fair share of secular laughter. Between his riff on the perils of ALL CAPS texting (“Who knows what syntax is when you’re spelling out a letter with a number?”) and his spontaneous public service announcement as Prieto repaired a broken bass drum, his verbal multi-verse was a tangle of mother tongues and motherlands. Humming through his urban konnakol was an implicit critique of human interaction (“No real I to I…”), shelter to a handful of solid grooves from his bandmates. Prieto’s wasn’t so much a question of his obvious virtuosity. Rather, it was an ability to find the pocket and stretch it to the fraying point, to read signs of variety into every moment, that impressed. Whether brushing through Lindner’s birdsongs or warping the night like a reflected moon, he was judge, jury, and executioner of every cell that divided on stage. And in the encore’s build from atom to molecule, he guided a heavenward craft from the shambles.

The trio lives up to its name, for a proverb is that which has become so fully integrated into the human landscape that its origin is unknown. So it is with they who live in the moment. In a brief address between songs, Prieto said as much when he acknowledged the open circuit of their unplanned approach and welcomed all of us in attendance as an integral part of that circuit. We were the sounding boxes for their craft, and these words the mental dribble of but one among them.

So ends my freestyle.