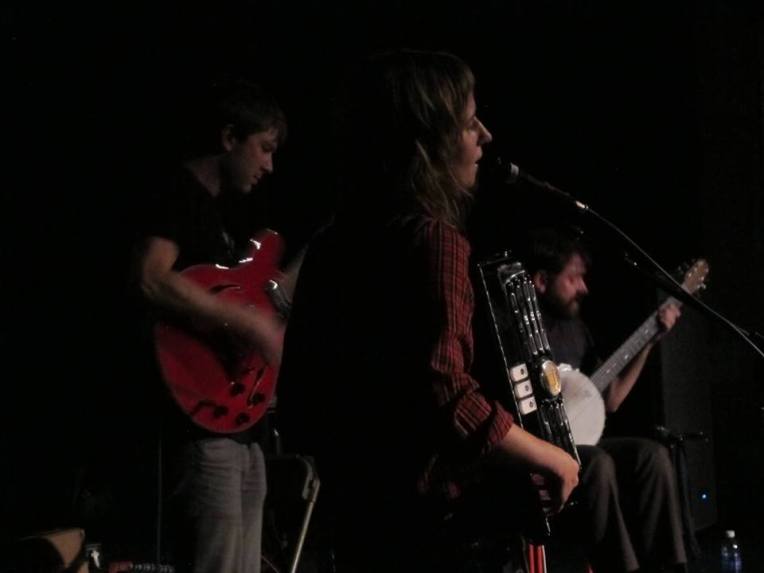 Turn on the radio in Small Town, Nowhere, and you might just feel the sounds of powerdove emanating from your speakers, if not from your own skin. The brainchild of composer and multi-instrumentalist Annie Lewandowski, powerdove skirts the edges of distant counties even as it erases them in favor of a landscape populated by songs in place of people. Guitarist John Dieterich and Thomas Bonvalet (who forges a distinct percussive palette with various technological and organic accoutrements, including his own body) complete the cybernetic triangle by which the music navigates, corroded yet still trustworthily affecting.

To hear the group’s latest album, do you burn?, in the ugly comfort of your own home is to open a dusty diary of impressions that remain nevertheless crystalline. To hear those songs in the beautiful discomfort of a live setting is to take those pages, leaf by leaf, and fashion from them a bed of kindling. Such was the warmth felt as Annie and company brought their characteristic brand of washboard balladry to Cornell Cinema’s stage on a crisp December night.

Although short in duration, each song was a story brought to chest-piercing fruition by some enviable synergy. Miniatures, yes, but in the way of a white dwarf star. Annie’s presence—willowed in body yet avalanched in mind—was the eye of the supernova; John’s insightful picking wielded gaseous filaments, like the webs that hold every corner of a house together in semblance of memory; leaving Thomas to connect the evening’s constellatory dots. The latter’s apparatuses—which included contact mics, harmonica innards, mouth organ, and even a light-activated banjo—were only nominally technologic. Whether the distorted desk bell at his foot (not a bid for help but a signal to the helpless) or the two metronomes phasing in “Easter Story” (off 2011’s be mine), his periphery sang apart, for it was clear that powerdove was plugged into more than just amps. These were songs written by means of and through a body steepled by childhood, broken like bread along fault lines of the here and now.

Like Annie herself, who started offstage and coalesced into sight only when the second song (“California”) commenced, the music was docked in immediate reality but tangled itself in seafaring dreams. Her enunciation was as convex as the words were concave, all touched to flame by the spell of her accordion. From a blur of cacti and rustling sleeping bags, she emerged with bits of wisdom, unadorned. These took on the color of something bloody in her bellows—nothing macabre but fleshy, pliant. There was also in the words a naturalist slant. A hollowed-out willow could become the dance floor of an entire fungal congregation. With moss for a canopy and pulp for refreshment, the party mingled until no single appendage was discernible from the next.

The performance ended with three videos (these for “Under Awnings,” “Do You Burn?” and “Wandering Jew”), each of which plunged into a crumbling imaginary with vivid eye-breaks and uneven seams: the American dream sinking into its own cavity until only a single tooth remained. And so, filing back out into the chill, spurred by a click track of the soul, we the concertgoers knew the story would continue on only in the mouth’s void.