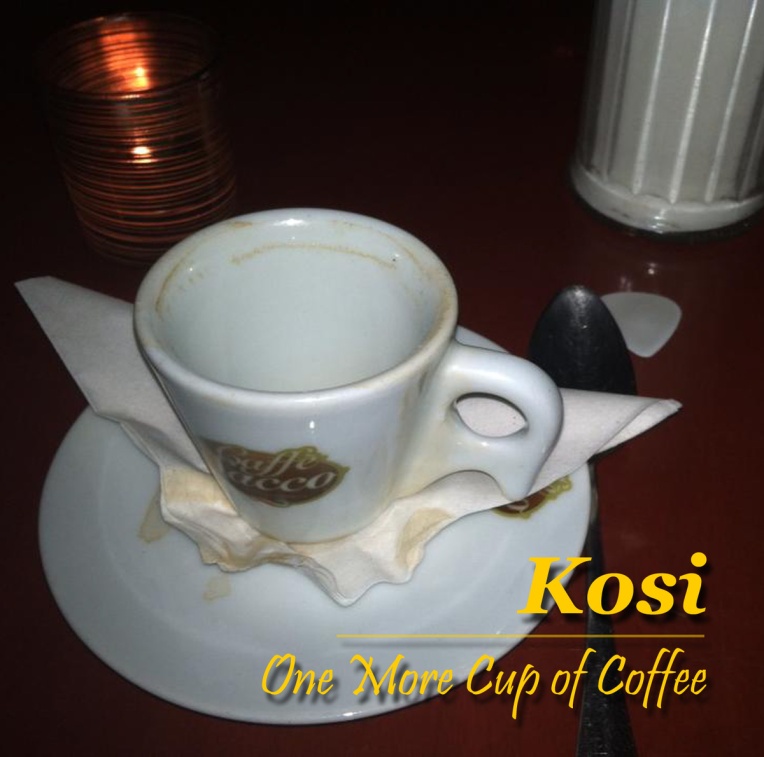 ever been kidnapped
by a poet
if i were a poet
i’d kidnap you
put you in my phrases and meter
you to jones beach
or maybe coney island
or maybe just to my house
–from “kidnap poem,” by Nikki Giovanni

Kosi is Akosua Gyebi Sorensen, a child of New York who has grown into her own on a bold, reflective debut album. One Cup of Coffee makes no excuses, pulls no punches, and leaves the mirror streaked with experience. Raised by hardworking immigrants in Southeast Queens, Kosi took to her own musical formations early on, despite her household tastes. “My parents played records of Jimmy Cliff and Shirley Caesar,” she muses, “but I always preferred to borrow Billy Holiday albums from the library. I don’t know what drew me to her as a seven- or eight-year-old child, as I couldn’t possibly have understood what I was hearing.” Yet it’s clear from her words and her sounds that a deeper understanding was just waiting for the ideal moment to emerge.

Kosi would go on to study at Brooklyn College, by which time her love of singing had already been instilled through participation in her local church choir. Outside the congregation, life had its way. As any musician knows, the City can be an unforgiving sea of voices vying to be heard, as attested by the fact that Kosi’s uncompromising talents are these days more often heard echoing through subway tunnels—a gig she’s owned since around Thanksgiving of 2013. And certainly we can give thanks that One More Cup of Coffee has materialized for those unable to ride the rails, for it shows just how those cavernous transportation portals have honed her art into something at once inviting and aloof.

Accompanied by guitarist Aron Marchak, she weaves a spell that is as much a portrait of her environment as of the contradictions of her own urbanity. To these ears, the relationship between voice and guitar is tight as yin and yang—so attuned, in fact, that one who didn’t know any better could be forgiven in thinking that Kosi was accompanying herself. The artist tells a different story.

“I’ve only been working with Aron for about a year. He works with many different artists in a variety of different styles (jazz, gospel, r&b, rock, etc.), and so he’s usually prepared to do whatever I ask him to do, provided I can articulate clearly what I want from him. Also, contrary to popular belief about singers, I’m not exactly the most demanding human being, and I’m ready and willing to work with whatever I’m given. The combination of his adaptability and my adaptability gives the illusion of ‘tightness’ when in fact, it’s the loosest of all possible partnerships.”

To that effect, Kosi sings with heart, about heart, and allows the disjointedness of lived experience to voice itself as memory. Her diction crinkles like a windblown shopping bag, in which rattles a variety of reference points. From jazz to blues to neo-soul: it’s all there, pre-tapped and ready to be heard, but with such freshness of vision that it could be from no other singer. This is Kosi’s strength, a raw yet elegant presentation that explodes with originality, as is especially the case when one considers the album’s only two standards alongside the intensities of her own songcraft. Of those tunes, she notes “Goodbye Pork Pie Hat” as something of a random choice:

“In a rehearsal with Aron one day, while I was searching through my folder for something or other, he started playing it and, recognizing it, I sang along with him. I liked how it sounded, so I suggested that we perform it at the show for which we were rehearsing. The inclusion of one wordless standard became a habit for us after that. Actually, maybe more of a ritual than a habit. I like the idea of singing wordless tunes because it makes me a part of the ensemble rather than just being a feature to be accompanied.”

The Mingus classic proves a fitting introduction, easing us into the album’s nocturnal universe without betraying the emotional rollercoaster about to ensue. Kosi’s instrumentality applies a smooth appliqué to Aron’s rich picking, carrying the tune in gracious slings of honor. Of the album’s other standard, “Autumn in New York,” Kosi says the following: “The album was released in autumn in New York. I was also born in autumn in New York. Autumn is my favorite season, and New York is the only city with which I identify. If I had to choose only one standard to identify with, that would have to be it.” In the duo’s purview, this song lovingly connects indoors to outdoors, nature to nurture. A leisurely stroll through Central Park. A counting of blessings on ten fingers. A romantic vision of a city ravished yet perseverant. 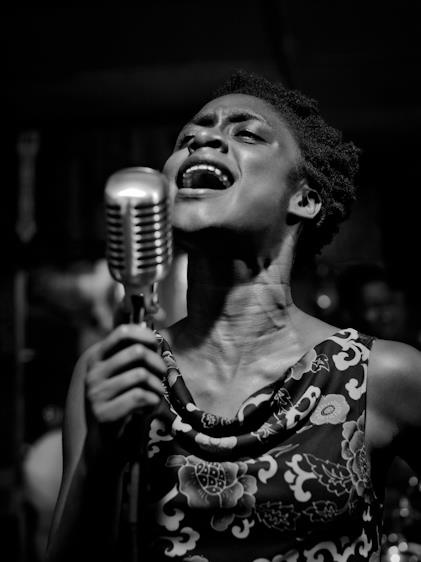 Yet what makes One More Cup of Coffee such a memorable experience is its multifaceted exploration of womanhood, which in Kosi’s diaristic originals comes across as both impervious and vulnerable. The singer cites “Need Your Love” as a prime example of the latter, for what appears on the surface to be a sensual, self-assured song, comes with a price. “It may be the most anti-feminist thing I’ve ever written,” she avers.

“It is about a woman putting on masculine bravado, or in other words, completely compromising her womanhood, so much that she’s willing to degrade, objectify, and overextend herself because she needs to feel ‘loved’ without ever even defining what that love would look or feel like. I am not glorifying this mentality; the narrator of this song is a pitiable creature who has (perhaps momentarily) lost all her strength but is still clinging to a false front. I am admitting to it, though. The narrator is me, or was me at the time when I wrote the song, proving that feminists are not immune to feelings of complete weakness.”

These sentiments bear echoes of third-wave feminist politics, which challenge essentialist (read: popular) notions of gender by owning up to, and learning from, moments of breakdown—as must we all, from time to time. Kosi is unafraid to perform her past as a means of re-creation. The end effect is a song set that de-mythologizes femininity and gets real for an hour. It’s a message touted by such visionaries as Audre Lorde, whose subscription to the erotic over romance reclaimed the former’s vilified spectrum as a levee against the tide of despair. As Lorde once wrote, “There is a difference between painting a back fence and writing a poem, but only one of quantity.”

With this in mind, we hear songs like “Karen” in more nuanced light—not as professions but obsessions of self-image, refracted through the soul and body of another, succumbing to love’s illusions all the same. Likewise, “Marlene” walks the cracks of heartbreak between suspicion and bodily trust, the infection of affection held under the microscope, and erupts into the album’s most cathartic moment: a grunt that plays like some visceral, operatic win. A verbal takedown of mind over matter, to be sure. Such expectorations are tempered by inhalations of resolve, as in the inebriated haze of “The Last Shot,” which is all about losing faith but also gaining trust in others when the chips are down. The bluesy perseverance of “Once and Future” negotiates even harder-won affirmations.

The relationships portrayed on the album are all the more realistic for being so fleeting. Whether the compromises of the title track (“One guitar string missing—I think that one’s the G? / One knight in tarnished armor come to rescue me”) or the brokenness of “Little Miss Generous,” there is a genuine recognition that whatever doesn’t kill you makes you stronger. All of which funnels into “I Wrote you a Song,” the album’s unlisted bonus track, which finds beauty in solitude and refuses the need of another body to define self-worth, confirming that love must start with the self before it can ever trickle into another’s waters. “I wrote you a song that you’ll never hear,” she sings, “cuz I’ll only sing it when I know you’re not near.” Hearing these words, we cannot deny them knowing that we are their substitute targets.

Although Kosi lays no claims to an overarching theme, the album deals with gargantuan questions of love and loss all the same, and does so with unabashed honesty. At times confrontational, at others lyrical, her personality hits you with all it has to offer. If you can’t handle it, don’t run away. Just listen more.