On 21 June 2016, clarinetist David Rothenberg, cellist Hank Roberts, accordionist Lucie Vítková, and guitarist Charlie Rauh played a concert at an unlikely time (5 a.m.) with (given the time) a less unlikely orchestra: a dawn chorus of birds at the Brooklyn Botanic Garden. In the waxing light of a cloud-obscured sunrise, trees vibrated with winged singers: the primary constant among otherwise spontaneous contributions by human accompanists. If the latter’s utterances seemed random and responsive, it was only because the former’s were so ordered and communicative—though if the performance sought anything, it was to ensure these two currents of sound production became as indistinguishable as possible.

The patter on leaves of a passing shower was its own sort of twittering as Rothenberg and friends shed the skins of their respective training in favor of an unencumbered style of play(ing). As the human quartet eased its way into the soundscape, a catbird joined in from a nearby bough. Though the creature’s body was as hidden as its song was naked, a thread of continuity drew itself between Rothenberg’s reed and that rogue throat, enacting a form of nostalgia that must surely have captured our ancestors long before the technology required to tell their stories was conceivable. Of said technology Rothenberg has been an artful proponent, as proven by his tactful use of an iPad preloaded with birdcalls summonable at will. 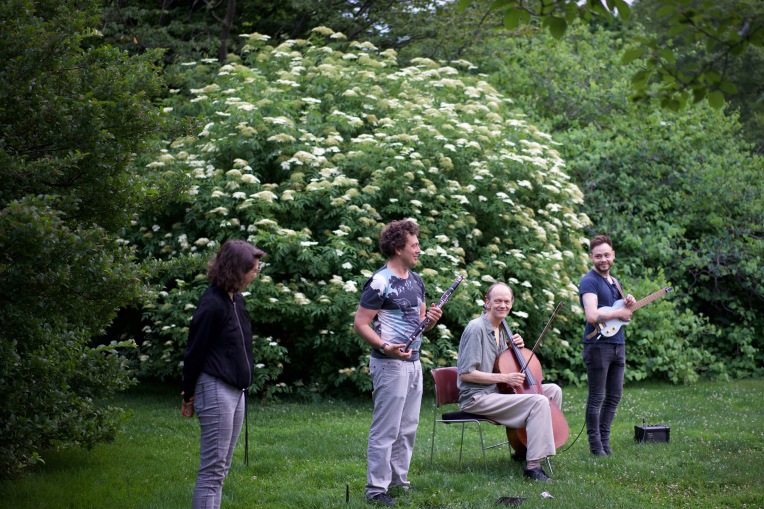 While each musician was in fullest support of the others, Vítková’s microscopy added much to the feel of the entire event. Whether playing the accordion, a string attached to a can, or a hichiriki (Japanese oboe), her colors meshed particularly well with Rothenberg’s. Roberts meanwhile flitted in and out of frame with his sensitive array of pizzicato and arco textures. The arpeggios by which he opened the second of two improvisations were especially moving, pointing as they did back to the magic already around us. This half of the performance was jazzier in flavor, for it manifested the interspecies blues pumping through the heart of it all. Rauh, for his part, was the most painterly of the ensemble, rendering broader scenes into which the other three might dot in their figures and villages. More than anyone, he fed on the visual aspect of the setting, attuned to the sunlight as it gained sway over fading drizzle. 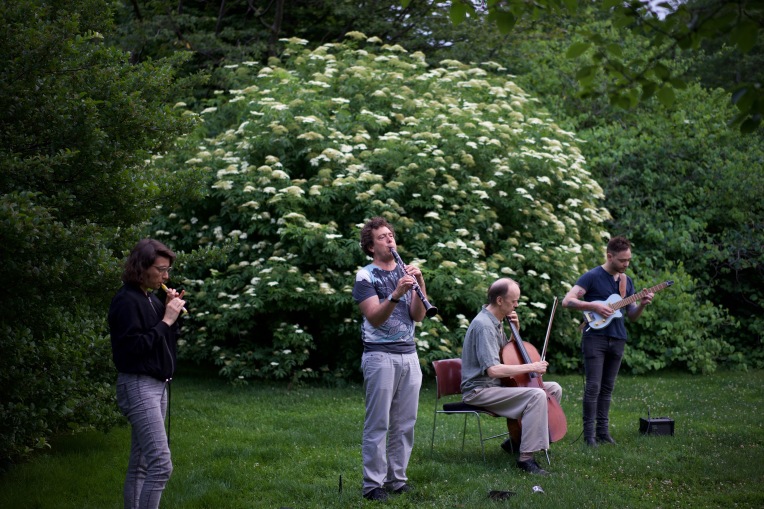 If music predates us, it also postdates us. It is the proverbial cradle in which our brief existence raises a few melodic cries before returning to eternal slumber. And in the harmony of this experience, at least, one knew that circles of life can and do pop up when least expected, and that such opportunities are to be savored whenever they arise. This music was, therefore, not so much conversation as conservation, a chance to blur the lines between literal and metaphorical flights toward an integrated whole of which those gathered were the smallest particles.