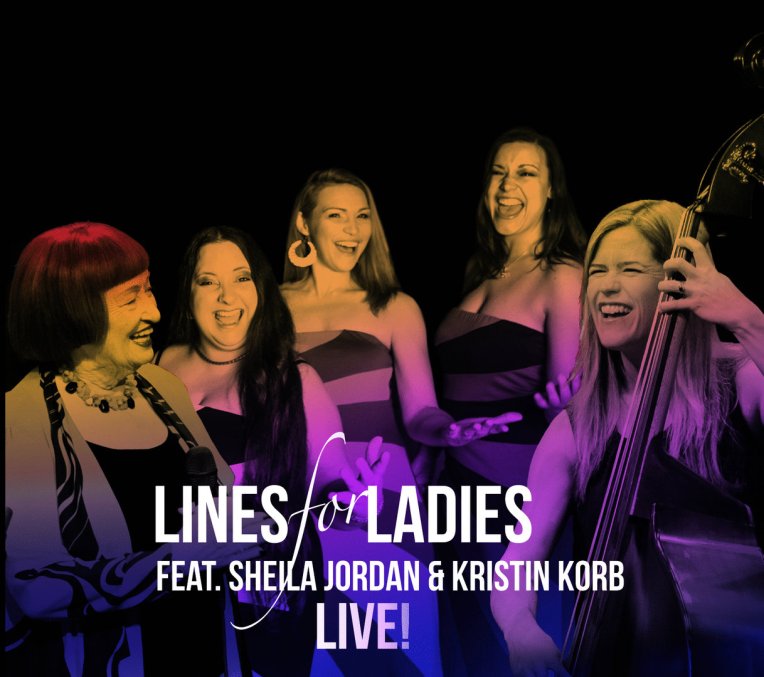 This live album from HGBS Blue Records documents the final performance of a two-week tour in 2014 by the ensemble known as Lines for Ladies. Special guest Sheila Jordan acts, in her words, as the band’s “spiritual mother,” shepherding in a younger generation of voices spreading their cohesive harmonies across canvases both familiar and new. To be sure, Kirstin Korb (bass/vocals), Anne Czichowsky (vocals), Sabine Kürlich (vocals/alto sax), and Laia Genc (piano/vocals) share more than the stage with Jordan. They carry on her alluring—or, as one song here would put it, “Delicious and Lovely”—tradition of jazz song as storytelling. Jordan has spent a lifetime and more perfecting her fashion of delivery, and among these women she is as a sun to the stars. Whether paying tribute to her Native American roots in the chant with which she opens “The Moon’s a Harsh Mistress” or unfolding a 13-minute mission statement in the largely adlibbed “Sheila’s Blues,” she churns emotion until it becomes soft as butter. “I sing the blues ’cause I paid my dues,” she croons, humbly failing to mention the profits she has reaped from subsequent dividends.

Likewise, the depths and breadths of Jordan’s spiritual children are not to be taken lightly. Czichowsky appends fresh, self-penned lyrics to standards “Killer Joe” and “Idle Moments” to delightful effect. The former song, suitably rebranded as “Ladies’ Show,” asserts its femme power in a male-dominated genre, while the latter highlights Czichowsky’s vocal trumpeting against Genc’s smooth pianism. Czichowsky relays with Kürlich’s French in a bilingual rendition of “I Wish You Love (Que reste-t-il de nos amours).” The two singers harmonize even more deeply in the above-mentioned “Delicious and Lovely,” a Kürlich original that boasts slick time changes and instrumental qualities all around.

Korb is ever the anchor of this set, and provides some of the strongest philosophies the performance has to offer. Between the Chet Baker-inspired vocalese of “But not for Me” and her duet with Jordan in “Dat Dere,” she brings audible smiles to everything she touches. Nowhere more so than in her original “Something to Celebrate,” which honors her fateful move to Denmark—where she has, since 2011, become a force of nature in the local jazz scene. Genc unravels many of the tune’s finer implications at the keys, reveling (as she does throughout the album) in every twist and turn.

Most wonderful (and unforgettable) about the record is the level of joy brought to every upbeat groove and downtempo swing alike. These are human beings who truly love what they do. Their passion is multifaceted, practiced as preached. And couldn’t we use a little more of that in today’s world?