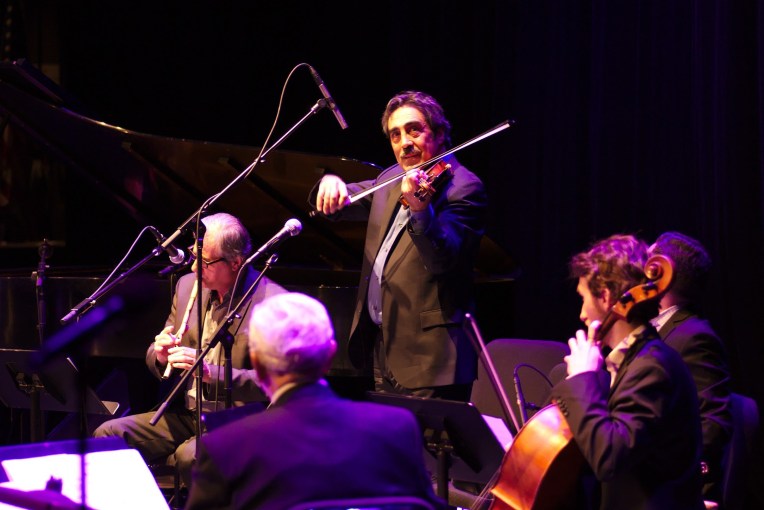 Something special happened last Friday at Bailey Hall — where master violinist, oud player, and composer Simon Shaheen and his ensemble presented their program, Zafir — before a single melody was played. As the musicians were tuning, Shaheen’s brother and fellow oudist Najib asked that the house lights be turned up. “We can love you better this way,” he quipped to the audience, a statement which, after a smattering of laughter, sank in as deeply as any of the music that followed. “No one ever does that,” Shaheen told me when I remarked on it after the show, and by those words closed a circle that I will remember most from among the evening’s plethora of conceptual shapes.
None of this is meant to imply that what transpired was any less moving; only that the heartfelt fluidity of it was all the clearer in being so prefaced. Through an overarching theme of transcendence, Shaheen unfurled a program as vast in scope as it was intimate in execution. Indeed, the sentiments behind Zafir were only the beginning. The word denotes breath, but here also a metaphorical wind (hence, the English “zephyr”) carrying Arab classical music into European, and particularly Spanish, milieus and back again. To evoke this exchange of influences, Shaheen compiled a meticulous program highlighting the uncanny kinship between flamenco and Arab traditions. To bring said kinship into the foreground, he enlisted the talents of Moroccan vocalist Nidal Ibourk, flamenco dancer Auxi Fernandez, guitarist and singer Juan Peréz Rodríguez, and members of his own Qantara ensemble.

It was only natural that two of the songs presented, Muhammad Fawzi’s “Fatafit Al Sukkar” (Sugar Crumbles) and Muhammad A. Wahhab’s “Ya Msafer Wahdak (You Who Travel Alone), were written for films, because, like the cinema, the concert developed programmatically, moving still frames with such smoothness as to evoke lifelike movement. Ibourk’s renderings showcased the seamlessness of the performance, as she seemed to thread a string from her voice through every instrument, pulling them with utter synchronicity through every turn of phrase. Ibourk was equally comfortable navigating the inlay of Tunisian composer Khamis Al Tirnan’s “Al Nawba Al Khadra’” (The Green Suite), as well as two traditional songs, “Ya Lore Hubbuki” (My Love to You, Laura) and the lively encore, “Ya Baba.” Like a root pushing deeper into earth with every breath, she sung from the very center of her being, at the same time reading the air with her branches.

Rarely have I seen a group of musicians who made what they do look so effortless. Whether in Ahmad Fuad Hassan’s “Samba Sikah,” a modal and rhythmic fusion of dance styles, or Sonia Mbarek’s Arabic setting of verses by Federico García Lorca, the overall blend was so uniform that it was, at times, like listening to a single instrument. Shaheen’s skills on the oud were nevertheless evident in his two original compositions. “Al Qantara” (The Arch) was inspired by his time in Spain, and introduced the phenomenal dancing of Fernandez, whose attention to rhythm was inseparable from her command of movement. Like Ibourk, she molded as much as followed the music, her feet an extension of Rodríguez’s hands on the cajón. The concert’s title track, as it were, was an improvisational tour de force, giving as it did the musicians space to dance in their own ways.

Another highlight was Rodríguez’s own “Allegria,” which found the composer at the piano, improvising around a folkloric theme. Welcoming again Fernandez, whose every stomp awakened our attention to the carnality of the dance, it brought home that tone-setting message of love, allowing those of us fortunate to be relieved of an anonymizing darkness to smile, and be seen.

(See this article as it originally appeared in The Cornell Daily Sun here.)