Traveling and listening share common strategies of description. A metaphor of choice was suggested in Voss, Norway, where this correspondent found himself enjoying dinner and a concert in the garden of Vossa Jazz Festival director Trude Storheim. Even more than the fine company, the local paragliders soaring overhead illustrated what I was hearing. Their gravity-defying navigation of thermals mimicked the circular breathing of saxophonist André Roligheten, who, with fellow reedplayer Jørgen Mathisen, bassist Rune Nergard and drummer Axel Skalstad, cut against the grain of our sunlit surroundings with passages of brooding, enchanting abandon while their improvisatory arcs held visual analogue in the sky that framed them. Known collectively as Rune Your Day, they did anything but, instead completing a larger atmospheric puzzle, of which they were the corner pieces. 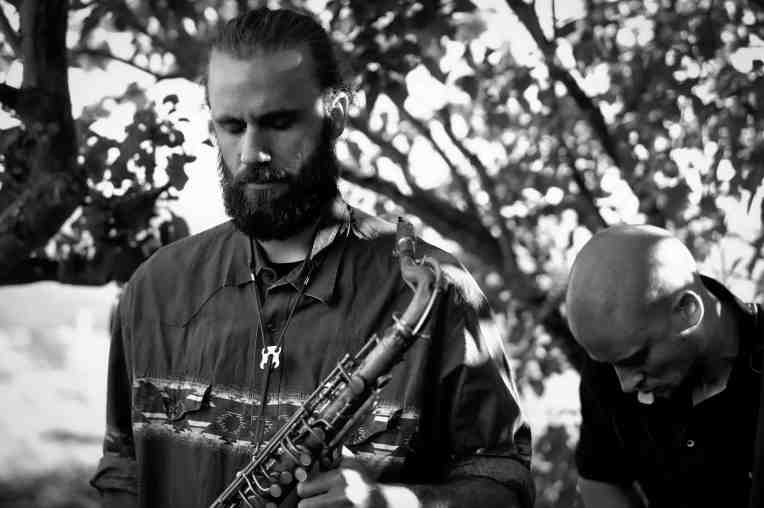 (Jørgen Mathisen and Rune Nergard of Rune Your Day)

This was one among a handful of concerts under the auspices of Nutshell, a series of showcases presented to an international delegation over the course of four days. It all began the previous afternoon in the port city of Bergen, where a constellation of soloists led by drummer and singer/songwriter Siv Øyunn Kjenstad cut through jetlag fog with the starlight of “Take Me Back” and “For a Moment,” the latter commissioned for the 150th anniversary of Henrik Ibsen’s Peer Gynt and built around motifs of that play’s incidental music by Edvard Grieg.

We were then whisked away the following morning to the lakeside community of Voss. Our first showcase came courtesy of the whimsical collective known as Bounce Alarm. Under the beams of the Finnesloftet, a church hall built in 1295, they primed expansive harmonies across the slick canvas of “Swing and Sweat.” 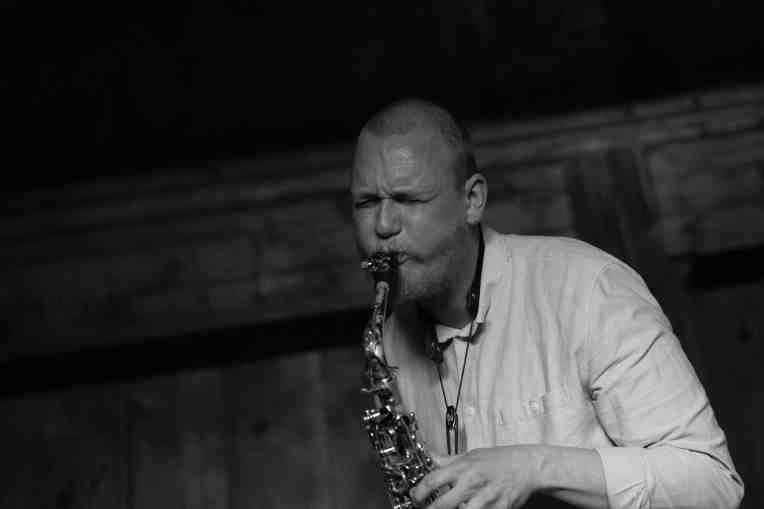 Written by tenor saxophonist Elisabeth Lid Trøen and featuring a phenomenal solo by alto saxophonist Christian Cuadra, it was an ideal prelude to a solo concert given later that afternoon by drummer Erland Dahlen, who, under Voss Church’s angelic iconography, linked an unbroken chain of electronically augmented beat science.

Following the above-mentioned garden party, we headed for Grieg’s former home of Troldhaugen to be treated by the Dag Arnesen Trio. Alongside bassist Ole Marius Sandberg and drummer Ivar Thormodsæter, the eminently regarded pianist balanced technique and self-expression throughout tunes inspired by rural themes, life experiences and Grieg himself. Arnesen’s grounded playing tilled the soil for his sidemen’s sowings, peaking in an arrangement of the Norwegian folk song “Bonden i bryllupsgarden” (The Peasant at the Wedding Farm).

Showcases continued back in Bergen proper. Demonstrations of novel instruments were at the forefront, including a performance by “airsticks” inventor Alon Ilsar’s real-time manipulations of cellist Amalie Stalheim and another by Terje Isungset on a percussion instrument made entirely of ice.

Before that we encountered the quartet of Roligheten, who achieved dreamy confluence in dialogue with violinist Adrian Løseth Waade. The benchmark thereof was “Telemark Tango,” out of which was churned a robust solo from bassist Jon Rune Strøm.

Pianist Håvard Wiik’s trio with bassist Ole Morten Vågan and drummer Håkon Mjåset Johansen also delighted; in such whispering odes to memory as “Tudor Style” and the dissonant groove of “Neidbau,” he flirted with completion through a frenetic taxonomy of sound. 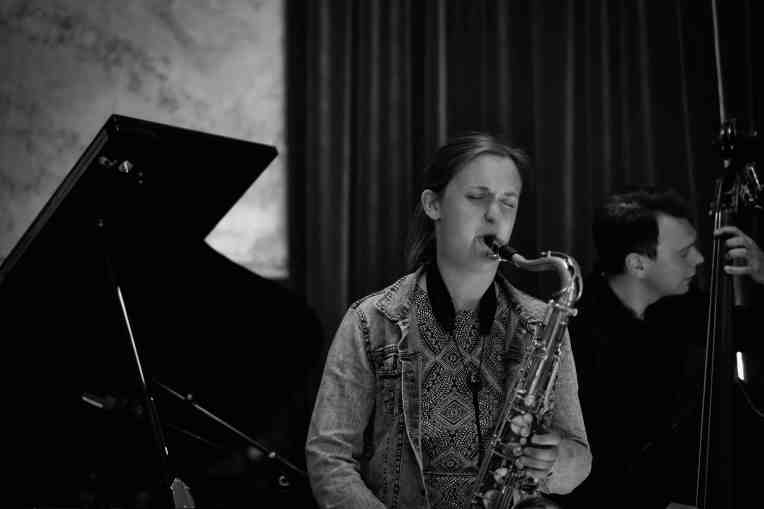 For our last two nights in Bergen, we migrated into the city’s massive Nattjazz festival and its eclectic mix of influences and influencers alike. My sampling of its concurrent performances began and ended with vocal-heavy offerings. The neo-soul beauties of Charlotte Dos Santos struck the deepest romantic chords in “Take It Slow,” her lyrical embodiment of which revealed a love not only of music but also love itself.

At the other end awaited the uplifting harmonies of Marie Daulne (her striking visage graced every Nattjazz poster in Bergen). As alter ego Zap Mama, Daulne and sister singers Tanja Daese and Lene Christensen spun such anthems as “Vibrations” and “Rafiki” (Swahili for “friendship”) with heartfelt affirmation and throwing attention to bassist Manou Gallo for a head-nodding solo spotlight.

The most precious jewel along the way was forged in the hands of accordionist Frode Haltli, whose Avant Folk project yielded the festival’s most cohesive experience. Between those unmistakable bellows and his band’s fluid congregation of fiddles, percussion, guitar and winds (including a memorable turn on ram’s horn by Hildegunn Øiseth), moods ranged from Sigur Rós-esque dirges to traditional-leaning dances. Haltli and friends showed mature respect for the music as landscape, which they rendered in layers like painters to evoke depth. 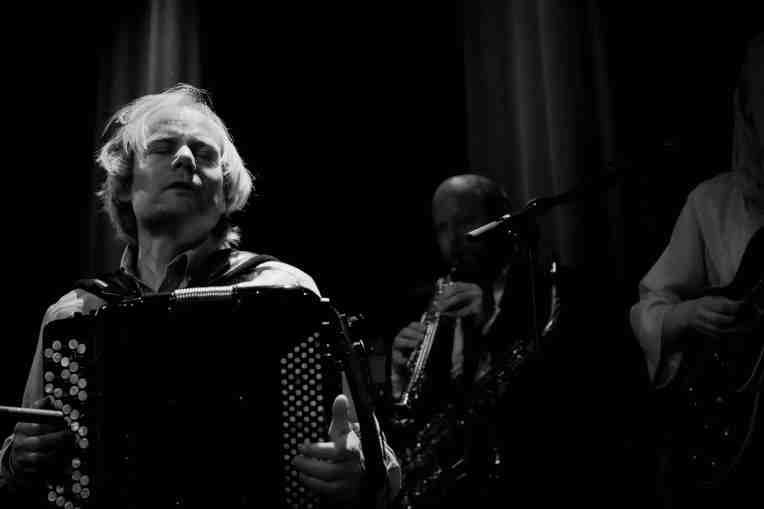 Equally effective was the Nils Økland Band’s mélange of folk and Baroque concepts as the fiddler/composer assembled a sum far greater than its parts. Whether through the strings of a Hardanger fiddle or viola d’amore, he threaded songs of air and sea, recreated to stunning effect by the boat- like creaking of bassist Mats Eilertsen’s bow and the hulk of percussionist Håkon Mørch Stene.

Other Nattjazz highlights included the rhythmic alchemies of multi-instrumentalist Ola Kvernberg’s super group Steamdome. In many ways, this outfit’s unity was the soul and spirit of the festival, an extroverted counterpart to Haltli and Økland’s delicate introversions.

It was music that made you want to run up a mountain just so you could feel the rush of jumping toward the fjords below—an image strengthened by the Skydive Trio of guitarist Thomas T. Dahl, Eilertsen (switching upright for electric bass) and drummer Olavi Louhivuori. Their melodic yet occasionally intense brand of lyricism vacillated somewhere between classic Bill Frisell and searing free improvisation. Even their ballads held intensity in their craw and spoke to an overarching interest in patiently building solos into narratives with beginnings, middles and endings. 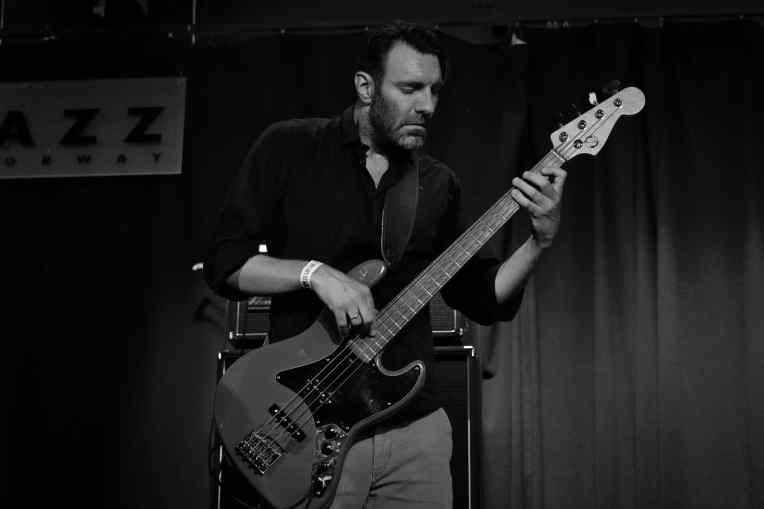 And so, I end my own narrative of this sojourn, made possible by the tireless efforts of Nutshell masterminds Brit Aksnes, Nina Torske and Aslak Oppebøen, who, like those paragliders over Voss’ windswept mountains, provided the necessary equipment to land safely and live to tell the tale.

(This article originally appeared in the July 2018 issue of The New York City Jazz Record, a full PDF of which is available here.)

2 thoughts on “Live from Norway: Reporting from Nutshell and Nattjazz 2018”