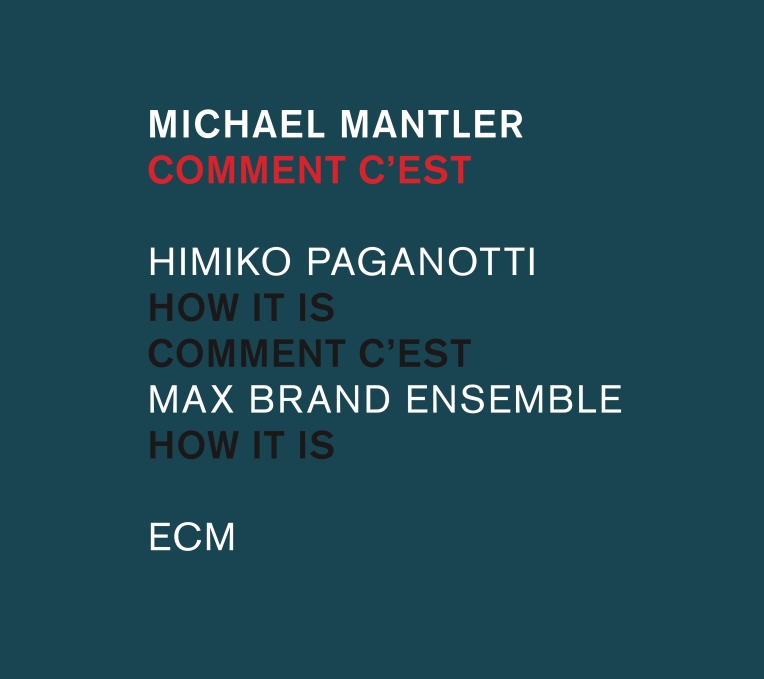 Few composers face their zeitgeist quite so head-on as like Michael Mantler. In this timely song cycle, written in French and performed by Himiko Paganotti (voice), Mantler himself (trumpet), and the Max Brand Ensemble under the direction of Christoph Cech, Comment C’est is a gut punch of agitprop exasperation, reactionary finesse, and thick description. It’s also in many ways the closing of a circle begun on his first ECM project, Folly Seeing All This. As on that 1993 album, we begin here by beholding the news (“Aujourd’hui”) in all its violent denouement. The instruments, now as then, embody a concerned citizenry, while Paganotti wraps her vocal cashmere around every word as if it were in danger of never being heard.

Mantler’s trumpet, for its own part, acts as mediator between linguistically articulated horrors and victims whose capacity for speech has been torn apart. Through perennial indiscretions of xenophobia (“Intolérance”), killing (“Guerre”), and capitalism (“Commerce”), Mantler leaves a trail of mirrors in the hopes that false idols of supply and demand might catch a glimpse of themselves and turn to salt at the mere sight of their own reflections.

At the core of it all is a harsh winter (“Hiver”), whose nakedness is its only defense against itself. Paganotti’s dramaturgical commitment, shivering at the molecular level, awakens the dead to mourn for those still alive.

This triangle of interpretive forces—lungs, brass, and ensemble—folds in on itself until one side can no longer be distinguished from the other (“Sans fin”). The winds take on progressively darker shades of meaning, as if the very shadows of war were reaching out their hands in the hopes of taking down as many with them as possible before the light of the next bomb extinguishes that possibility.

no more place to live
not even in a space already gray
cataclysmic
and again, again
they resume

Terrorism reigns (“Folie”), wonderment bleeds (“Pourquoi”), and despair grows into an all-consuming forest (“Après”). Mantler tries to prune every offending branch, but finds even himself overwhelmed by the sheer immensity of our own inhumanity. The poignancy of this music, its reason for existing in the first place, is an endless cycle of which we’ve been offered these ten exegeses. But while they might seem crisp now, we know that one day they will be shuffled into a deck perpetually stacked against us. As the final question (“Que dire de plus”) bids us adieu, we must ask ourselves another: When will it end?