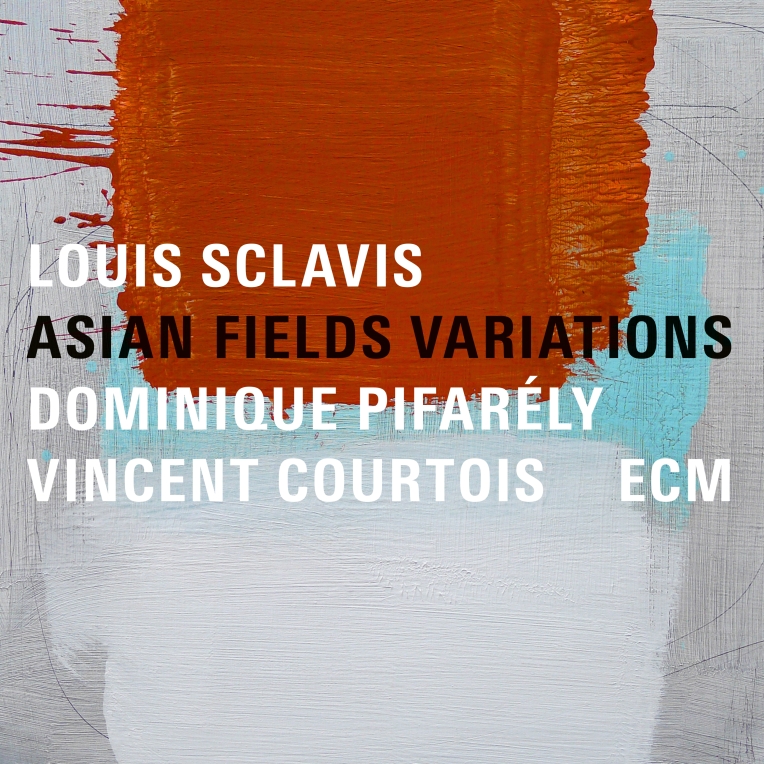 Although clarinetist Louis Sclavis has longstanding partnerships with violinist Dominique Pifarély and cellist Vincent Courtois in respective contexts, here they record for the first time as a trio. Each musician contributes to the overall compositional palette, and with each other’s greatest strengths firmly in mind. Sounding at times like chamber music, and at others like lullabies for an exhausted jazz fanatic, Asian Fields Variations is a robust thesis, fully proven.

Sclavis’s writing oozes atmosphere. Amid the arid currents of “Mont Myon,” throughout which drones metamorphose into melodies and vice versa, a melodic firmament switches places with an improvised fundament, and by that exchange speaks to the grander order of things in which this music unfolds. The bass clarinet monologue of “Pensée Furtive” likewise listens within to describe that which occurs without. But then “Asian Fields” opens a new window. There’s an open secrecy to its aesthetic, as if rendering a scene in charcoal normally done in ink. Courtois unpacks some particularly deep implications in his pizzicato solo, leaving Pifarély to bounce joyfully within each new geometric standard applied to the frame. And where “Cèdre” is a virtuosic showcase for all three, there’s nothing extraneous to hide its intentions. Here, as also in the closing “La Carrière,” a flexibility of emotion prevails, allowing every motif room to inhale, exhale, and inhale again.

The sound-world of Courtois is a graver mixture of dissonance and consonance. His balancing of the two in the unaccompanied “Done And Done” is absorption incarnate. “Fifteen Weeks” and “Les Nuits,” both for the trio, are mosaics of near-overlapping memories, each instrument an actor in idiosyncratic dramas. Pifarély’s “Figure Absente” is a violin solo of quasi-Baroque fascinations and Romantic exegeses. It is text and footnote in one. His “Sous Le Masque,” by contrast, is a play of hidden shadows and implications. Thus is left only the group improvisation “Digression.” Located at the album’s exact center, it speaks with the assurance of friends debating over issues that, while never resolved, make them closer for it all.