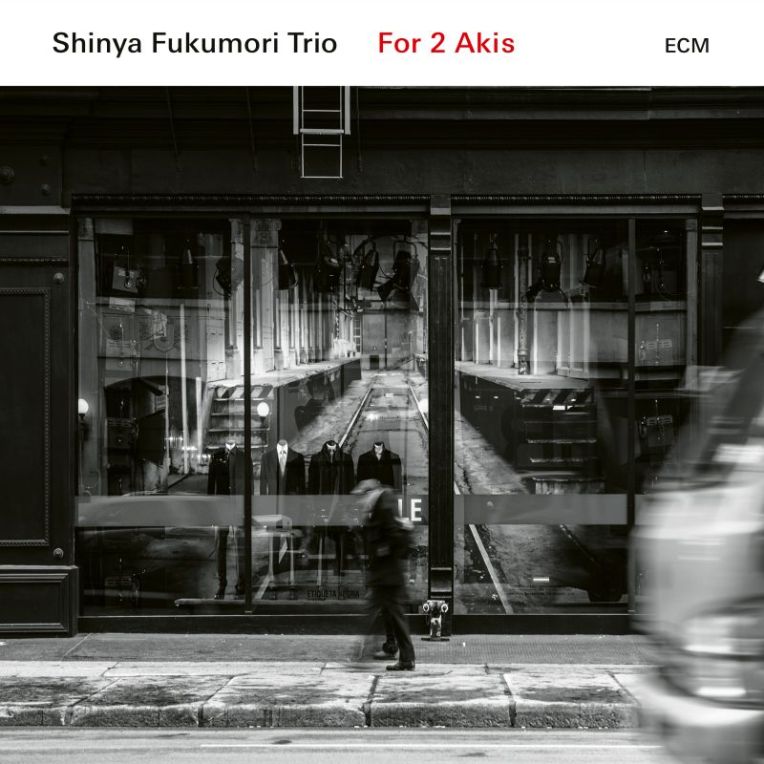 For 2 Akis presents the ECM debut of drummer Shinya Fukumori. Born and raised in Osaka, he learned to play violin, piano, and guitar before relocating to the United States at 17 to pursue the drums. Yet after graduating from Berklee College of Music and immersing himself in the jazz canon, he became so inspired by classic ECM recordings, including Eberhard Weber’s Silent Feet and Keith Jarrett’s My Song, that he resolved himself to one day record for the label. Toward realizing that goal, he moved to Munich—a risky decision encouraged by this album’s dedicatory Akis, both affiliated with Osaka’s Interplay8 jazz club. In a categorically unmatched trio with fellow itinerant spirits Walter Lang (piano) and Matthieu Bordenave (tenor saxophone), Fukumori reimagines history as a process of ongoing revision.

Much of that revision is drawn through evocation of Japan’s Shōwa era (1926-89), a time marked by economic collapse on either end, between which unthinkable traumas transitioned into golden-age prosperity. Although his own life overlaps it a mere five years, he understands its nostalgic power as if through firsthand experience, expressed in his introverted approach to virtuosity. Such restraint indicates an artist unafraid to humble himself in silhouette against the movie screen of time on which montages of compassion flicker by. Thus, each tune of Fukumori’s selected corpus extends a narrative devoid of antagonists and bound by regressive politics of interpretation.

During the interwar period (1918-39), a concerted emphasis on delineation and preservation of folk customs infused all aspects of Japanese cultural life, including crafts, farming, and music. And it is perhaps with this timeline in mind that Fukumori begins his artful set with “Hoshi Meguri No Uta” (The Star-Circling Song). Written by literary icon Kenji Miyazawa, its original lyrics depict Polaris guiding readers on a tour of the visible universe. Fukumori likewise takes listeners by the gentlest of hands on a journey through bygone eras, along the way establishing a precedent of communication with his bandmates. In this context, Lang’s lyrical curiosity and Bordenave’s vulnerable yet integral tone are nothing less than the light to his stardust.

By the 1960s, Japan had recovered from World War II and poured renewed effort into rural development as a means of reforming national identity. It was also a time when nihon-chō kayōkyoku, or Japanese-style popular songs, infused public consciousness with their airs of better times. Presciently enough, the solitude and hardship so commonly examined in those songs foreshadowed the bubble whose burst would mark the end of the Shōwa, ushering in an era of hypermodernism and recovery. Before that key transition, however, songwriter Kei Ogura planted his “Ai San San” in the popular imagination. Its evocation of perseverance through rough times gifted an anthem of recovery before one was even needed. Made famous by actress and enka queen Hibari Misora when she released it as a single in 1986, it continues to feel premonition-worthy at a time when we could use a little calm from the storm.

The oldest song here is Rentarō Taki’s “Kōjō No Tsuki” (The Moon Over the Ruined Castle). Written in 1901, it’s a timeless meditation on the fleeting nature of things. As people and their traces come and go, it seems to say, only their love lingers, reflected in the waters of mortality. Jazz aficionados will recognize the tune by way of Thelonious Monk, who arranged his own version as “Japanese Folk Song” on 1967’s Straight, No Chaser. Says Fukumori of the version at hand: “Every Japanese child learns this song at school. The melody of the song is very Japanese, so it stands out and still sounds very authentic even though I have re-harmonized it and arranged it.” So begins a three-part suite, in which mallets elicit a soft vocabulary from the drums, shifting into pianistic shadow cast by a glowing saxophone before blending into Fukumori’s “The Light.” Like the title track, it showcases his compositional ability to activate dense reactions from delicate chemicals, proving that he and his trio are no strangers to urgency when needed. In that precise regard, the rounded peaks of emotional transference in “Silent Chaos” and “Spectacular” are emblematic of his optimism and gratitude.

All the more reason for listeners to hold in mind the timeline being explored therein. What appears to be another beauty in the form of “Mangetsu No Yube” (Full Moon Night) reveals itself to be a prayerful reaction to tragedy. Composed by Takashi Nakagawa and Hiroshi Yamaguchi in response tothe Great Hanshin earthquake of 1995, it speaks the very language of connection that makes this band so transfixing. Lest we forget the potency of said language, we find two offerings by Lang (“No Goodbye” and “When The Day Is Done”) and one by Bordenave (“Émeraude”). All three are memories folded and unfolded, each more soulful than the last, as part of a collective dream.

It’s impossible to regard Fukumori as anything less than a rightful heir to Paul Motian’s legacy. His attention to detail, unflinching musicality, and penchant for understatement are rare in a musician so young (being 33 at the time of this recording). As when encountering Motian, this is music that demands the night. Anything less than total darkness would obscure its poetry against a market too often shouting with exposition.

Easily among ECM’s finest of the decade. Don’t miss it.