Seventeen years separate the first appearance of Yuuko Shiokawa and pianist András Schiff on ECM’s New Series and this long-awaited follow-up. Here they bring their intimate knowledge and experience to bear on sonatas by Johann Sebastian Bach (1685-1750), Ferruccio Busoni (1866-1924), and Ludwig van Beethoven (1770-1827). Through its sequence and execution, the program reveals as much richness of ideas within the pieces as between them. 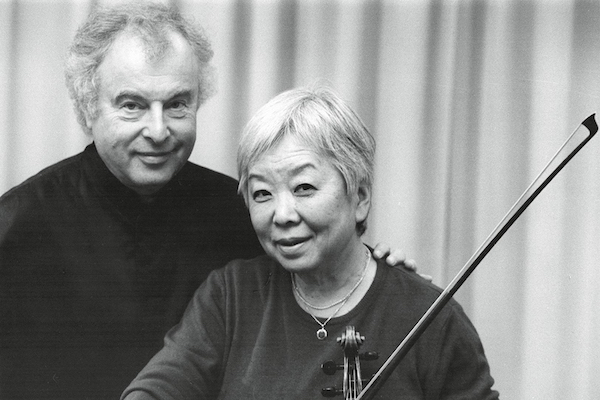 Bach’s Sonata No. 3 in E Major, BWV 1016, dating to his 1717-23 tenure as Kapellmeister at Köthen, is emblematic of a then-nascent genre, and finds both composer and interpreters ordering lines of many shapes and sizes. Schiff’s role at the keyboard is a challenging one, each hand operating independently yet with deep awareness of the other, while Shiokawa must paint with an actorly brush from first note to last. The vulnerability she brings to the opening Adagio is but one example of her ability to take something so lilting, so fragile, and render it impervious to the trampling feet of time. From there she takes us on a journey of inward focus, and by an interactive cartography traces bubbling streams to destinations of delight.

Although Busoni was more steeped in Bach than perhaps any composer before or since, one would be hard-pressed to find Baroque affinity in the first movement of his Sonata No. 2 in e minor, Op. 36a. Towering over a decidedly Beethovenian landscape, it leans toward and away from its historical precedents with fervor. Whereas single movements in the Bach were facets of a larger mosaic, each of Busoni’s sections is a sonata unto itself. The gargantuan final movement, however, is a theme and variations on the Bach chorale “Wie wohl ist mir, o Freund der Seelen, wenn ich in deiner Liebe ruh,” as it appears in wife Anna Magdalena’s Clavier-Büchlein of 1725. Busoni’s 17-minute exegesis goes from funereal to exuberant and back again. Between those worthy bookends stand two slim, insightful volumes. Where the Presto is playful yet adhesive, the somber Andante treads over shifting terrain.

In light of these fantastic excursions, Beethoven’s Sonata No. 10 in G Major comes across as non-fiction. As the composer’s last violin sonata, it holds a status all its own, and its details are organically suited to the duo. Where the trills and harmonies of its Allegro yield an enchanting ripple effect, the Adagio holds us suspended as if in need of nothing more than a confirmation of breath. A brief Scherzo scales the highest peak before trekking down into an Allegretto with a joy given life through musicians who care genuinely for everything they touch. It’s therefore difficult to listen to this recording without reminding oneself that Shiokawa and Schiff are partners in both music and life. Not only because they play so lovingly, but also because they listen to each other with rapt attention, inspiring nothing short of the same.