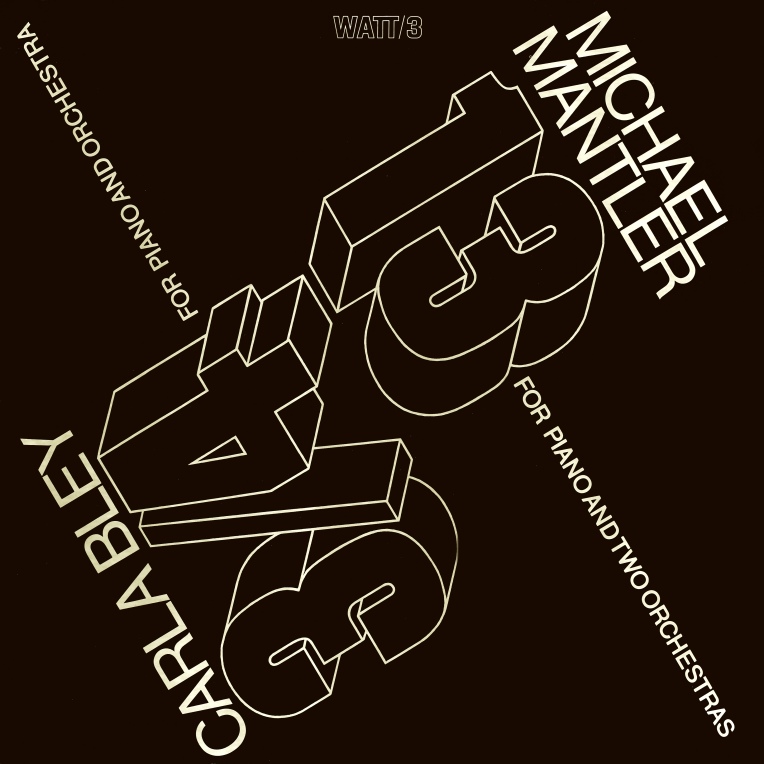 After sleeping in separate beds, so to speak, in the first two WATT releases, Carla Bley and Michael Mantler share a marquee for the label’s third. The program here is bipartite, sporting one composition by each in a resolutely multi-dimensional form of jazz that pairs Bley’s piano with orchestral forces.

Mantler’s 13 is a morose dive into some light-starved chambers of nature. Sounding like a storm turned into a symphony, it has the climatic features of rain and hail. Bley is a lost and itinerant soul in all of this, one whose mind, despite being over matter, is subject to abuses of the elements. The combinatory dialogue of strings and horns generates internal combustion, reaching textural peaks of brilliance. The piano’s forlorn timbre is emphasized by a slightly detuned and tinny delivery, as if it were an instrument that has known only a life of physical compromise. And so, any glimpses of perfection or woundless-ness feel more traumatic than hopeful. Struggles are indicative not of pain but of an underlying deference to the fate of its infliction. The storm, then, serves to illustrate a way of life, not an interruption to it. We are left with a sea of textures to be felt along the spine and ear canal, building to a cathartic wall of sound à la Glenn Branca.

Bley’s 3/4 is just as distinctly her own, though its breadth of vision may be compared to the classical hybrids of Keith Jarrett (who, incidentally, gave this piece’s premiere). Opening with a cyclical piano that maintains its course throughout, it ties a web of winds and brass, allowing notes to flow through every opening. An overriding drama speaks of the theater, but one in which bodies jump off the stage yet never land. Droll memories share oxygen with coarse futures, yielding a vibrancy that speaks both of its composer and the time during which it came into being. It ends as it began, in a childlike wonder at the immensity of creation. Only now it knows where life will lead because, as we will realize, everything that came before was a prelude to self-destruction.