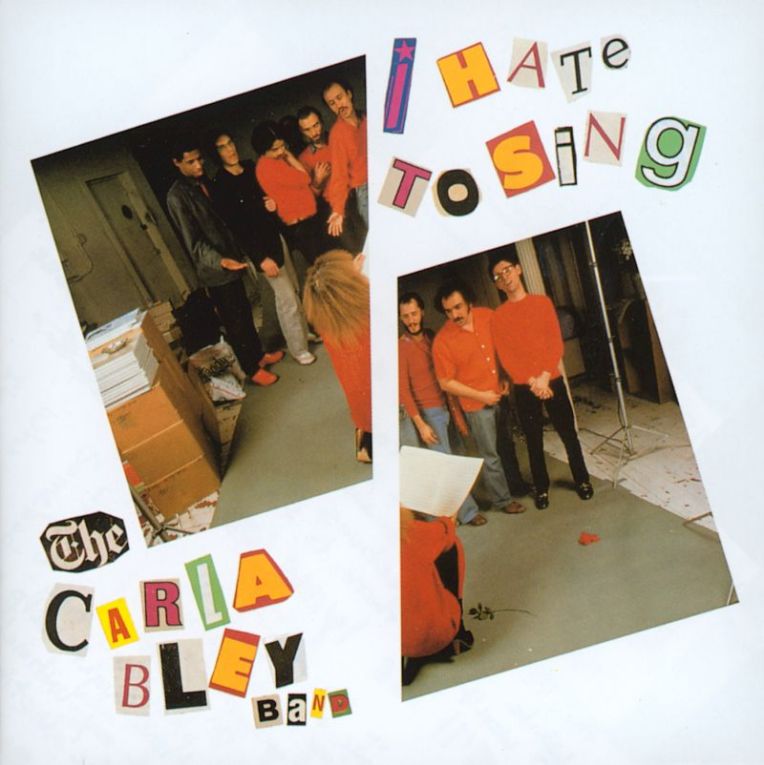 The Carla Bley Band
I Hate To Sing

Until this point, Carla Bley has been known to throw in a shot of wry humor into almost every cocktail she mixes. But it’s not until I Hate To Sing that she fashions her live persona into that of a standup comedian. The limited vinyl release from 1984 (reissued on CD in 1996) exhibits some of the bandleader’s slyest compositions via her ability to craft an entire world out of notes and materials.

Despite the talented instrumentarium she has assembled this time around, including such constant companions as trumpeter Michael Mantler, trombonist Gary Valente, bassist Steve Swallow, and drummer D. Sharpe, Bley’s focus is on the very thing the album’s title professes to hate. Such a setup in any other hands might come across as dated, but there’s something undeniably apposite about her songcraft. In “The Internationale,” for example, we find ourselves people watching in the selfsame hotel’s lobby as itinerant travelers from all over the world struggle to understand each other in an ivory Tower of Babel. Its refrain of “What did he say?” feels all too prescient in a politically divided world such as ours. Further highpoints of lowbrow include “Very Very Simple,” in which pianist Arturo O’Farrill sings about the rudimentary song Bley has graciously allowed. Its self-deprecating air would not be out of place on a vaudeville stage. A comically unremarkable drum solo seals the deal. “Murder” is also memorable for its tongue-in-cheek twist on stalking. Background vocals by tuba player Earl McIntyre, assuming the role of impending doom, are spot-on and rile the audience in this live recording to bubbling laughter.

A few non-vocal passages sprinkled in for good measure remind us who we’re dealing with. “The Piano Lesson” is a chain of unsuccessful piano runs, held together by spurts of competence from the whole band; “The Lone Arranger” (one of my favorite Bley titles) is a gentle romp; and “Battleship” threads an SOS signal and explosions through a vivid free-for-all tapestry.

The end effect, as overtly comedic as it is covertly philosophical, is a master class in social commentary. Still, it is sure to polarize listeners. And while it may not share a spotlight with some of Bley’s more recognized albums, it’s a historical jewel and one of the few successful amalgamations of jazz and comedy that I’ve ever heard (for comparison, click here to read my take on Jon Benjamin’s Well I Should Have…). This is nowhere truer than in the title track, in which Swallow takes over on drums to allow Sharpe the microphone, thus adding some uproarious touches to Bley’s swing. A noteworthy moment occurs when the music stops and Sharpe says, “Can I have something to drink please?” And again: “I need a more professional group to back me up when I sing. Get some West Coast cats.” Even at her most audacious, Bley proves the value of balance. In this instance, every element knows its place.