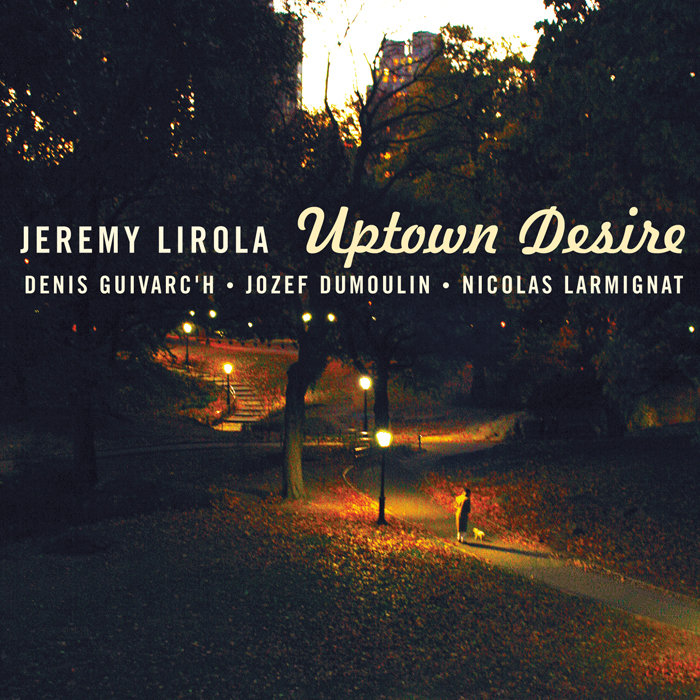 Uptown Desire is bassist Jeremy Lirola’s portrait of his time growing up in New York City and the many performances and influences he encountered there. An unusual blend with Jozef Dumoulin (piano, Fender Rhodes, electronics), Denis Guivarc’h (alto saxophone), and Nicolas Larmignat (drums), it develops in real time—i.e., without ever trying to fast-forward or rewind—as if following every second to the letter. “Insufficient words” is therefore more than just the title of its opening track; it’s also the quartet’s modus operandi. Traction is consequently hard to come by. The teetering dialogue between piano and bass that begins “Moutal” is indicative in this regard, leaving drums to formulate their own interpretations between the two voices, an amalgamation of signs that plucks the foreground like a fruit from its tree. The saxophone comes in almost too late, as if only now awakening to a groundswell on the horizon. Such tensions between paths parallel and askew cross territories relatively unified (“Après quelque part”) and incohesive (“Cette belle chose sans nom”) alike. It’s as if the temptation of a head-nod might be too much of a given, and so the piano refuses to take the aesthetic bait.

Having said that, there are some more successful coalitions herein. “Art the last belief” piques interest in Dumoulin’s Fender Rhodes, meshing well with the late-night vibe of Guivarc’h’s altoism. “Mektoub” is another charmer, where the subtlety of every player interacts at a subcutaneous level. “Au pays des mutants,” though off-kilter, is also groovy in its own way, jumping into the fray with some forthright reed work and fragmentary pianism, bowing out for an engaging bass monologue into the finish.

After so much inconsistency, it’s refreshing to close with “Bello by bus.” Its driving beat, lyrical bassing, and measured melody make me wish it was the rule, not the exception. For while the album is filled with great ideas and instincts, the results are largely meandering and underwhelming. There really isn’t a sense of conversation here but of a band that, despite sharing a room, is speaking in cardinal directions.