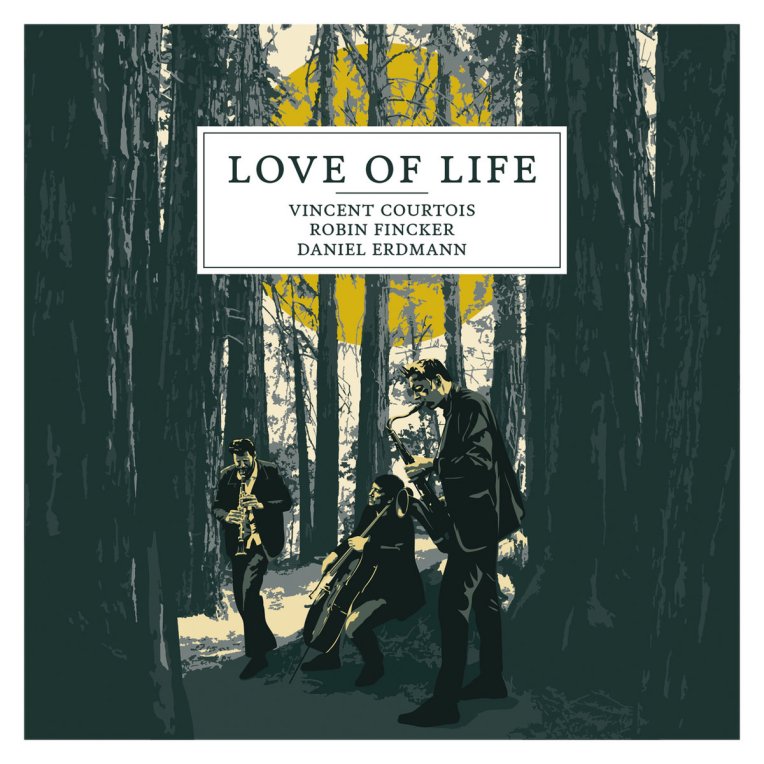 The appropriately titled Love of Life is cellist-composer Vincent Courtois’s wordless tribute to writer Jack London. London is a fairly recent discovery for Courtois, who cites the semiautobiographical Martin Eden as a constant companion while on tour with reed players Robin Fincker and Daniel Erdmann. The trio began their travels on the East Coast and ended them in California, where they met with London’s great-granddaughter, improvised under the towering trees near his gravesite (as pictured on the album’s cover), and recorded this session on the author’s Oakland, California homestead. The result is music that brims with agency and verve and explores London’s empathy for the underrepresented, the spat upon, and the voiceless.

Each track title pays respect to a short story or novel from London’s oeuvre. His empathy for divided selves is reflected in two diptychs: one for Martin Eden and the other for “To Build a Fire.” Ranging from the former’s jaunty charisma (indicative of a fumbling naivety) to the latter’s crackling flames, Courtois leverages an emotionally naked tone in the contexts at hand. Before these deeply psychological forays, the title track sets the pace with its gentle procession of horns, as if to remind us that everything will be okay in spite of the struggles faced by all. This in contrast the fact that hope seems so far away in the period song “Am I Blue” (Grant Clarke/Harry Akst), which captures the angst of being a working-class subject in a bourgeois world. That same disgruntlement carries over into “The Dream of Debs” and “South of the Slot,” wherein wars are waged internally.

“The Road” is a marvelous highlight. Here the tenors provide a harmonious framework, almost like another cello playing double stops, while Courtois cries out with guttural fortitude by means of his own. Fincker and Erdmann throw their own shining coins into the compositional fountain with “The Sea-Wolf” and “Goliah,” respectively. Where one is stormy and dire, the other is delightfully sardonic. Courtois caps off with a solo “Epilogue” to restore credence to remembrance as the only viable coping mechanism in a world hijacked by self-interested materialists.