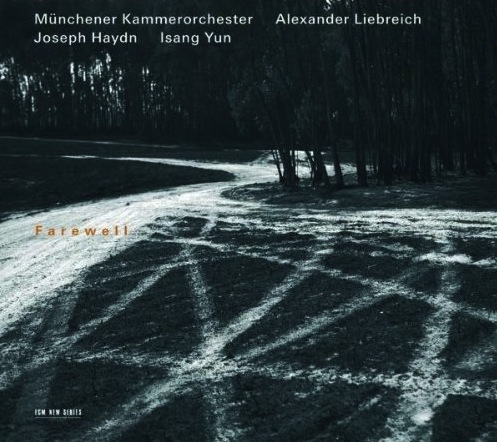 Alexander Liebreich takes Christoph Poppen’s coveted position as director of the Munich Chamber Orchestra in this flagship recording for ECM. Say what you will about pairing the sound-worlds of Joseph Haydn (1732-1809) and Isang Yun (1917-1995). The results on this disc are nothing short of breathtaking, for when the first movement of Haydn’s Symphony No. 39 in g minor (1765) for two oboes, four horns and strings spreads its majestic wings we cannot help but be swept away in the current. Liebreich enhances the dynamics for which the Munichers are so well known, nuancing the hunting horns with especial verve and panache. The dancing Andante evokes an exchange of partners beneath starry chandeliers, hands joining and separating in joyful twirls. Yet this joy is also quiet, respectful of the larger social body in which it figures. Unwavering from its careful, obedient purpose, it moves headlong into the Menuet, prancing its way with steps careful and true into a vigorous finale. Here the buzzing of strings hurtles us into a dream of conquest and victory. It is the kind of music that makes one want to conduct, to be the rhythmic and emotional fulcrum of something grand.

The 1772 Symphony No. 45 in f-sharp minor (known as the “Farewell” Symphony, as its performers are instructed to leave the stage upon its completion) for two oboes, two horns and strings opens with a delicately energetic Allegro. Interlaced harmonies from horns add a warm undertone to the frosty strings. The especially somber Adagio goes along languidly, even as the double basses surge slowly upward, unknowing of the delightful Menuet soon to overtake them. By the finale, a sense of dramaturgy prevails that is anything but hackneyed. This blends into a wonderful Adagio, which ends the piece on a surprisingly with just a violin and a few lingering winds.

All of which seems but a friendly preamble to the language of Yun’s Chamber Symphony I (1987). Scored for the same forces as Haydn’s 45th, its brush-fine detail in the wind writing calls to us from a different context entirely. The oboes embody an elegiac torturedness, seeming to sing and speak simultaneously. A planet colliding, the music ejects chunks of varying size, careening off into unknown reaches of outer space. This is not to imply that the music is destructive, but rather generative, full of creation and stirrings of spiritual awareness. The dialogic relationships among the instruments are superbly rendered, both in score and in performance. Liebreich ensures that the strings always move in arcs, scooping rather than carving their motivic soils into buckets of unity. Each section of the orchestra moves independently, but at the whim of a greater purpose that cannot be musically defined. Despite the complexities involved, this music is full of open spaces and winged phrasings. With each new section, the magnification of the microscope increases, such that we begin with an amorphous mass but end in a field teeming with microbes.

The performances here are superbly balanced and recorded, and prove once again that ECM is at the forefront of classical engineering and programming.

This album concludes Thomas Demenga’s Bach cycle which, begun in 1986, boldly sought out previously unimagined connections between the Baroque master’s solo cello suites (here, Nos. 5 and 6) and later visionaries. At every step along the way, Demenga has forced not a single hair of his bow in an arbitrary direction, instead finding in each pairing of works and composers a web of simpatico relationships.

Demenga plays the Bach suites a full whole tone down from modern pitch, a tuning contemporaneous with the time of their composition. He even uses unwound strings for a noticeably rawer sound. The Prélude of No. 5 is particularly visceral for it, those opening groans rising from the root of our expectations with withered leaves and rustling secrets. The Courante of the same no longer skips but struggles in an attempt to free itself from the swamps. The Sarabande, however, sings in a way I’ve never known it to before or since. The famous No. 6 Prélude also retains much of its inherent light and bridges over into one of the more heartfelt Allemandes on record. The penultimate Gavotte is also notable for its rustic edge. These are unlike most renditions out there, and for that reason may divide listeners. Either way, I feel as if I have spilled enough virtual ink in Bach’s name to leave my impressions at that and turn to what is most remarkable about this release: the works of Japanese composer Toshio Hosokawa and his mentor, the late Korean composer Isang Yun.

Of Hosokawa’s music, Oswald Beaujean has said, “These sounds, to be sure, never appear in the form of musical imitation. Instead, they are reduced to their essence and always retain something deeply artistic.” And indeed as we wrap ourselves in the silvery veils of In die Tiefe der Zeit (Into the depths of time) for cello and accordion (1994/96), we may not help but feel the ground falling away at our feet. The music pulses like a dying body, a light blinking through a gauze curtain. The overall sound is akin to a Japanese mouth organ with a harmonic outlier skirting the edges of its reedy sound. In it we hear a story of famine, of broken families, of burned villages, of people torn from their places of worship. The accordion (played to weeping perfection by Teodoro Anzellotti) shows us the way through this wreckage, so that we might sit before a cross, steeped in the lessons of trauma.

Similarly, the Duo for violin and cello (1998) shows a propensity for swelling, silences, and pauses, though it is far more agitated—a stage of denial that circles an indefinable center. At some moments the instruments seem intent on filling up as much space as they can while at others they beg for that space to fill them in return. This asymptotic push toward silence is a blessing of contemporary classical music, at once sharpening our ears to the world of the microscopic and abolishing the prescriptive master narratives of our histories in favor of fragments. The recording is accordingly porous, attuned to mid- and high-range sounds.

Winter Bird (1978) for violin solo is something of a reprieve from the weighty emotions of all that precedes it. With it Hosokawa manages to bring the subtlety of the shakuhachi to those four humble strings as snatches of melodic energy hop and warble in a cold gray sky brimming with the promise of snow.

Yun’s sound-world is one step removed from time. The works presented here come to us already affected by tortured political past from a man who struggled with his “Eastern” origins and the decidedly “Western” musical paradigms into which he was indoctrinated as a classical composer. Yet these paradigms crumbled as he began to redefine himself in the serial theory of the Darmstadt School, and it was in that aleatoric openness and dematerialization that he came into his own.

Gasa (1963) for violin and piano is a fine example of his holistic approach. Its balance of disparate languages is precisely what makes it grow. This small slice of intrigue trembles with delicate inversions and implosions, a tone-setting specimen under the microscope, dying for self-awareness.

Espace I (1992) for cello and piano, on the other hand, unravels itself in threads of equal thickness and, being the most recent of Yun’s works surveyed here, reveals a composer at the highest stage of personal development. This piece is more uniformly weighted, for where the counterbalances add up to a denser harmony in Gasa, here the dynamics are pockmarked, fading as the piano grumbles like a belly in want of sustenance.

Images (1968) for flute, oboe, violin, and cello brings the project to an enigmatic close. This music takes shape in block chords and releases embryonic tendrils of life into starry ether. Each tone is given life and therefore the potential to occupy space. The combination of instruments is quite effective, all the more so for the committed musicianship under its employ. Like the album as a whole, it shapes itself as if in dire need of contradiction, turning the mirror just so, thereby allowing us to see that the faces we thought we knew were really just reflections all along. 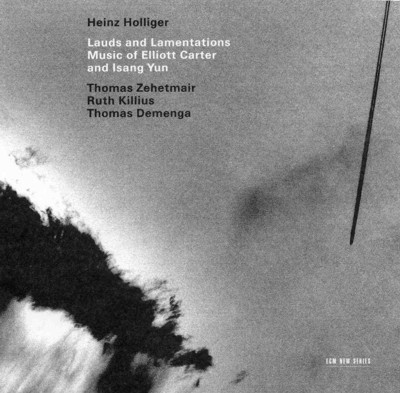 Lauds and Lamentations
Music of Elliott Carter and Isang Yun

Elliott Carter is the Benjamin Button of contemporary music: the more he ages, the more youthful he seems to become. At the time of this writing, he’s still going strong at 102. That being said, his is not an endeavor to overcompensate for a fading mortality, but rather a deeper exploration into a key aesthetic of his entire output: possibility. What that possibility looks like depends entirely on the whim of the moment, the colors of scoring and performance that mark his oeuvre at all stages. 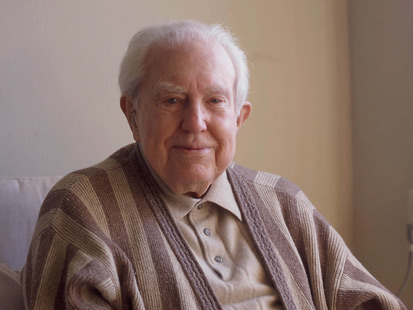 The Oboe Quartet of 2001 is a quintessential example of Carter’s tightly wound exuberance. While distinctly “modern,” there is something downright fun about the piece. It is playful, inventive, and positively bursting with life. And who better than Heinz Holliger to act as its heliocenter? Here is a musician who not only plays the oboe as if it were a part of him, but who also brings a singular admiration for Carter to light in every measure. The quartet is a peanut gallery of moods, some meditative and others jarring, each more fascinating than the last. The final passages show especial and intensive concentration. After this 17-minute chunk of gravid whimsy, the 4 Lauds (1999/1984/2000/1999) for solo violin pat the cheeks of our comatose inner children into wakefulness. Each has its center—be it a note, an atmosphere, a statement, or a phrase—from which emanates a fresh start. A 6 Letter Letter (1996) for English horn in F scales a modest cliff, reaching at last with its final hand-crawl the horizontal plane it seeks. The tongue-in-cheek Figment (1994) for cello alone unfolds like a beautiful lie, for which its companion, Figment II: Remembering Mr. Ives (2001), provides gorgeous contrast with its lower microtonal vowels and high-pitched consonants.

The pairing of Carter with Korean dissident Isang Yun (1917-1995) is more than circumstantial. Theirs is an inexplicable sort of affinity. Where the former elicits winsome optimism, the latter drowns us in ceremony. Piri (1971) for solo oboe solo is a discipline in and of itself. Spurred by Holliger’s focused tone, it spins themes from the thinnest of fibers. This deeply internal sense of space and accumulation is expanded in Yun’s own Oboe Quartet of 1994, which skitters sideways like a crab on sand. Over three densely packed movements it starts in collective naivety before falling to its knees amid the slowed air raid sirens at its center. A potentially lucid finale is hinted at through a memorable trill shared between oboe and violin, only to crack under the pressure of earthbound agitations.

For the two oboe quartets featured on Lauds, we must thank Heinz Holliger, who asked both composers to write pieces for this neglected configuration, as yet “unchallenged” since Mozart. Both receive their world premiere recordings here and glisten with the golden seal of any benchmark achievement. The musicians on Lauds are all ideally suited to the material and its “linguistic” stumbling blocks. Thomases Zehetmair and Demenga (both ECM mainstays) and Ruth Killius (violist of the Zehetmair Quartett) round out the limitless talents of Holliger in a program that is sure to yield many new discoveries for years to come.