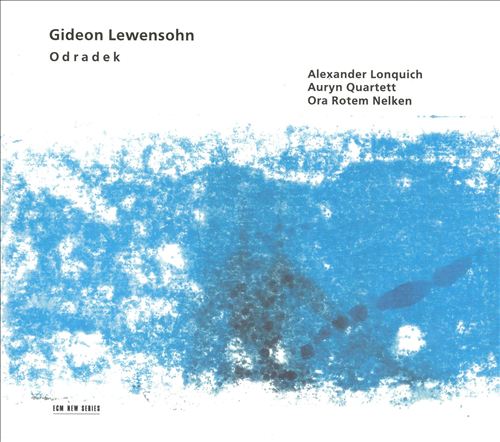 Israeli composer Gideon Lewensohn splashes onto ECM New Series with Odradek, a program of intriguing, sometimes perplexing, but always gripping music. The Piano Quintet is exemplary of Lewensohn’s odic approach, paying homage to his own brother Micah, as well as to György Kurtág, the Hilliard Ensemble, George Rochberg, and Dmitri Shostakovich. And while more than a smidgeon of each movement’s namesake is palpable, even more so is the freshness of a unique voice in contemporary music. These are not the seemingly perfect circles of ripples in a pond, but rather the jagged and frothy edges of an immeasurable shoreline. The first movement is a cycle in reverse. Violins pull like hands from a gooey mass clutching the prize they so desperately sought, only to realize that its virtues have all but been destroyed in the process of discovery. The second movement skitters like glass, shifting through high harmonics and mysterious refractions. In the third movement the cello at last groans from the underworld. With the circling birds of high violins now gone, it is free to peek its head above the surface and divine its own shadow. The fifth movement is the most violent, its controlled chaos spiraling ever downward into magma. These honorary fragments continue in the title quartet with further nods to Giya Kancheli, Witold Lutosławski, and Gustav Mahler, among others. Other descriptors are more subjective, charting moments of paranoia, drunkenness, and distortions of time. Still others bear whimsical subtitles like “Sarabandoned” and “Epiloque.” Each is a drip through a semantic IV in which the sublime and the violent are equal medicine. Bookending the Quartet are two iterations of the Postlude for piano. With every protracted fall into joy, moments of dynamic increase seem more like extensions of a default quietude rather than ruptures of it.

To be sure, Odradek is an uneasy place to be, but one that offers up its own fascinations with contemplation. The music responds just as well to abandonment as it does to undivided attention and maps its footsteps on the bodies of each high-caliber performer. Instruments are re-clothed and compressed into seeds before being scattered across a barren field that only now flourishes to make up for lost time. We are the reapers here, our scythes raking together every husk of this brilliant crop.