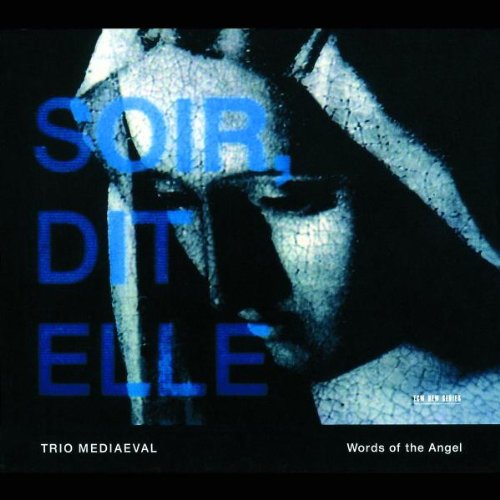 Trio Mediaeval
Words of The Angel

The fourteenth-century Messe de Tournai is the earliest extant polyphonic mass and provides the skeleton for this debut release by Trio Mediaeval. In his accompanying notes, John Potter (who also produced the album) stresses that the survival of such a manuscript is something of a miracle. Written on the backs of ledgers, the mass could easily have suffered the destructive fate to which most such music succumbed in an age where paper was a precious commodity. That it emerged from a war-torn Europe unscathed is likely “because a conscientious accountant couldn’t bear to throw away old financial records.” An overtly Marian theme pervades this disc, as evidenced by the English-sourced motets and sequences leaved between the Mass, and further in a selection of lauds from thirteenth-century Cortona.

Three solos dot the program, each surrounded by luminescent swaths of divine vibrations. Of the chants, Salve mater misericordie is the brightest, and refracts light like a window into the Trio’s further projects. The words “Stella Maris” clearly stand out here, foreshadowing the title of their third album, while the cover art (a still from Godard’s Histoire(s) du cinéma) cues their second, Soir dit-elle. The Mass itself rests on a delicately consonant edge, ladling our attention between voices and the echoes they project. Nestled like a diamond in an already captivating program is the title piece by Ivan Moody. Dramatic key changes and a snake-like alto core make it one of the most intriguing pieces the Trio has recorded thus far.

Hailing from Norway, Trio Mediaeval honed their craft through focused study with the Hilliard Ensemble, who seem to have passed on not a small amount of adventurous spirit. Often compared with the now defunct Anonymous 4, the Trio walk a striking musical path uniquely their own. Sinuous drones and anchoring lines are gloriously configured, and articulations rendered with vivid care. Words of the angel deserve to be sung by voices of the angel, and here they most certainly are. 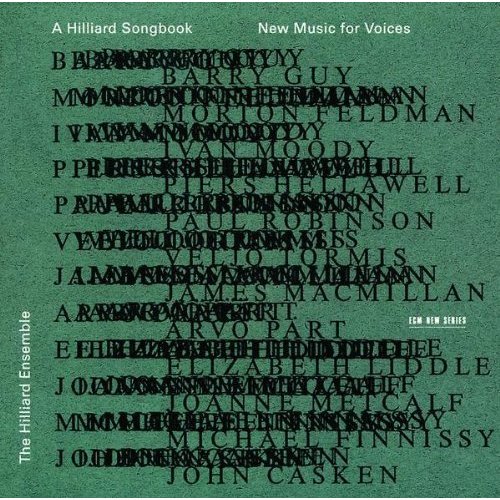 The Hilliard Ensemble
A Hilliard Songbook: New Music For Voices

Those who approach this album like I did—that is, only after listening to the Hilliard Ensemble’s many early music recordings—may be in for a surprise. Whether that surprise is a pleasant one or not may depend on the listener’s openness to new sounds. The opening convulsion that is Barry Guy’s aphasic Un coup de dés would seem to foreshadow a bumpy ride. Its whirlwind of extended double bass techniques and choral acrobatics leaves us hard pressed to find our bearings. The score, Guy tells us, encourages improvisation and even the modification of what has already been written. Using a section from a Mellarmé poem, which likens the process of thought to a mere dice-throw, the piece works its way into our ears like a dwarfing star. It is abstract, agitated, and unsettling, yet full of gracious detail we cannot help but enjoy. The Hilliards demonstrate that they can execute a piece of such technical difficulty and “modern” sensibility with as much fluidity as they approach their more familiar repertoire—at least insofar as their recordings are concerned, for they have always been known for juxtaposing contemporary works with those of bygone ages in their live performances. And then we get the short and sweet Only, the earliest published composition of Morton Feldman. In less time than it takes to microwave a frozen dinner, we are utterly transported by Feldman’s visceral melodic rendering of a Rilke sonnet, brought to its fullest fruition through the angelic voice of Rogers Covey-Crump. It is a folk song for its own sake, a funereal hymn for the living. This sets off a spate of shorter pieces by Ivan Moody and Piers Hellawell. Moody’s viscous miniatures live up to the composer’s name, taking us through a range of emotional colors. Endechas y Canciones sets Arabic-Spanish poetry from the 15th and 16th centuries. The second of these, “Endechas a la muerte de Guillén Peraza,” is a dirge from the Canary Islands that pulls at the heartstrings with a pace slow and focused, like moderated speech. The Hilliard Songbook by Hellawell, on the other hand, is a whimsical journey through A Treatise Concerning the Arte of Limning by Nicholas Hilliard (1547-1619), the celebrated Elizabethan portraitist. This is the centerpiece of the album, both in title and in song. The treatise’s idiosyncratic descriptions of color inspired the composer to recreate those very colors with voices. Regulating the piece is a refrain taken up each time by one member of the ensemble: “True beautie of each perfect cullor in his full perfection in perfect hard bodies and very transparent.” Through this many-hued ode we are given valuable insight into not only the Hilliards’ vocal art, but also into the visual mind of their namesake.

Of the longer pieces represented here, Paul Robinson’s Incantation is textually the broadest. The words are adopted from Byron’s poem of the same name—what Robinson calls a “vitriolic curse”—through which the composer sought to foreground the Hilliards’ sonority over the work being performed. As the music marks its slow path through a rather morbid text, we feel the voices blend into a single destination. Kullervo’s Message, by Estonian composer Veljo Tormis, recounts a dramatic episode from The Kalevala, Finland’s nineteenth-century national epic. From a line of skillfully harmonized textual lifts, Tormis hangs a series of messages by which the eponymous tragic hero is informed of the deaths of his loved ones, even as he prepares to exact his revenge upon those whose ridicule led him to such self-destructive fervor. Tormis’s melodic and programmatic colors are ideally suited to their source material, moving with the virtuosity of a master storyteller. Scottish composer James MacMillan offers his own epic statement in the form of …here in hiding…, a deceptively simple mesh of the poem “Adoro te devote” by St. Thomas Aquinas in both its Latin and English forms.

The remaining pieces comprise a flavorful mixture of words and musical ideas. Two exemplary statements from Arvo Pärt, And One Of The Pharisees… and the splendid vocal version of Summa, make fine company of Elizabeth Liddle’s Whale Rant, which takes its cues from Moby-Dick, and works its music like clock hands, with one arm counting the hours while another traces a faster, larger circle. The second hand becomes invisible, implied only in the vocal gestures of the sensitive performance, and is forever lost in the ocean of its source. Joanne Metcalf’s Music For The Star Of The Sea, is a thinly veiled meditation on the words “O ave maris stella” (“O hail star of the sea”) that extends the possibility of a single utterance into a vast Marian fabric. Sharpe Thorne by John Casken paints an image of Christ impaled, while Michael’s Finnissy’s Stabant autem iuxta crucem praises the one who bore him. And in Canticum Canticorum Ivan Moody again dazzles with this setting of verses from the Song of Songs and its loving incorporation of Byzantine chant.

Those wishing to hear the range of the Hilliards’ technical prowess will want to check out this collection for sure. This humble quartet sings with such clear articulation of phrase that one accepts every note like the nourishing morsel it is. While the music is for the most part contemplative and lovely, never ceasing to fascinate even at its least accessible moments, much of it feels spun from the same thread. The pieces by Ivan Moody stand out here as being the most well thought out and textually aligned, while the Hellawell, Tormis, and Guy enchant with their distinctive flair. That being said, it seems a shame to think that cultures outside a Eurocentric Judeo-Christian context should be shunted here. Considering that nearly all of these pieces were written for the Hilliard Ensemble, and that some of their composers were involved in the Hilliard Summer School led by the ensemble in residency, a narrow scope is perhaps understandable. Geographical limitations aside, the traveling instinct is still there in the Hilliards’ adventurous spirit, captured in every flawless phrase, in every committed performance that continues to issue from their very throats.