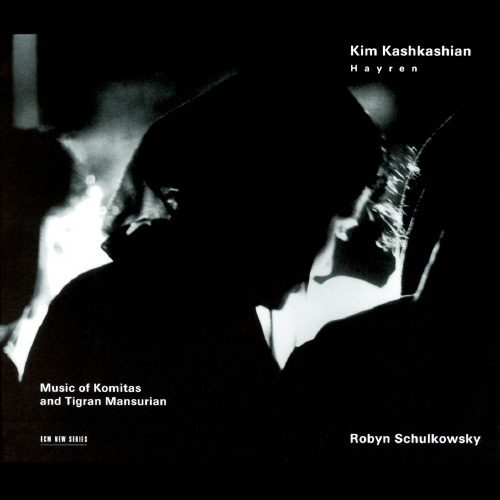 The music of Armenian composer Tigran Mansurian made its first ECM appearance on Alexei Lubimov’s Der Bote. Yet it wasn’t until violist Kim Kashkashian reflected deeply on her own Armenian roots that his sound-world, along with that of the nation’s treasure Komitas (a.k.a. Soghomon Soghomonian, 1869-1935), came into its deserved own. The result is a fortuitous one, not least because of Kashkashian’s unwavering dedication to her instrument and its limitless possibilities. Hayren interlocks Mansurian’s earthen sensitivities with Komitas’s visionary roots for a blend that is at once supra-paradigmatic and forged on a shared oral connection between those who perform and the very earth on which they stand. The program’s title deliberately evokes the poetic style much revered in Armenia, and the implications could hardly be more appropriate, for while Mansurian is like a brittle page, Komitas’s typography is bold and crisp.

Although the album is made up mostly of chamber pieces such as Havik, in which the viola seems on the verge of losing its foothold, surprises await us Mansurian not only takes to the piano but also adds his actual voice into the rippling waters of his surroundings. The polished arrangements encase every raw lullaby in a lantern, such that the quietude of songs like Garun a feels like the shadow of the dying light of Krunk. His is not a voice to be praised for its technical prowess, but one to languish in for its unabashed descriptiveness. Mansurian seems to mimic Kashkashian’s gravelly emotions, if not the other way around. This is music that flirts with pitch as the wind might with a tree branch: no matter how much it bends, its essential form remains intact. One can say the same for Chinar es, which feels on the verge of utter collapse from the weight of its openness. And it is a fine musician indeed who can become even more vocal in her instrumental rendition of Krunk, which while timorous is by virtue of its lilt a caress on whatever part of the brain is activated when we read moving literature. After an alluring piano solo in Oror, sounding like a plaintive interlude in an Eleni Karaindrou soundtrack, Kashkashian and percussionist Robyn Schulkowsky untie every subtle knot to be found in Mansurian’s Duet for viola and percussion. What starts as a soulful postlude burrows into an 18-minute cavern of living darkness. The melodies are self-aware, dented by marimbas and gongs, and point like a compass needle to the truest north that is incantation.

Hayren is an album that will likely require repeated listening. As for myself, I can only say it has grown with me into a rich and multilayered carving. Not unlike life itself, it is narrated by a thousand cryptic asides for every direct proclamation, and through this disparity achieves a mature sort of unity that is nothing if not honest.

Kashkashian always brings a personal dimension to her playing and perhaps nowhere more so than here. The intimacy of her interpretations is only enhanced by those of Mansurian, who continues to open our ears to the possibility of what lies already locked behind those cochlear doors.