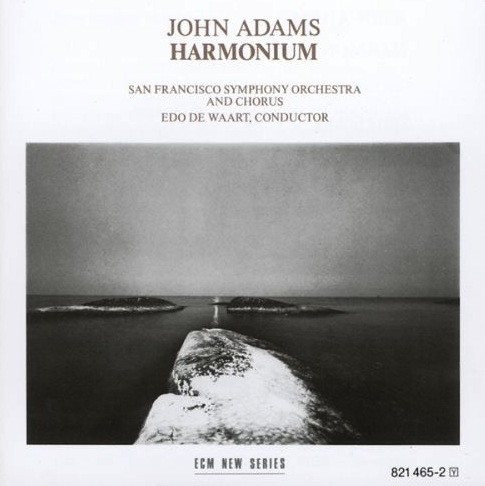 Music emerges from a dark tunnel, a smooth and liquid train with a large chorus as passengers. The accelerated evolution of Harmonium is brought forth in what Adams calls a “preverbal creation scene,” an inescapable feeling of solitary light tinted with the weight of retrospection as the voices intercede. Harmonium seems to revel in self-awareness, building as it does through a series of dynamic swings from the threshold of audibility to ringing pronouncements of verse. It is a convoluted world where density and transparency coexist in equal measure.

At times this piece sounds like Adams’s popular Shaker Loops with words, at others like a Philip Glass tribute with characteristic pulses of flute and strings, at still others like a ritual of its own kind. It is a pastiche of poetry (John Donne and Emily Dickinson provide the texts), a bridge of intentions, a house with only two windows.

The recording quality here may polarize listeners somewhat. While on the one hand it captures the overall mood of the piece in a rather heterogeneous mix, on the other it loses detail in the quieter moments. I would imagine, however, that engineering choices in this case were dictated by Adams’s vision for the piece as a whole. It is meant to be a single “fabric of sound,” thereby necessitating a more distanced recording. It is like a lake: deceptively uniform from a distance, but promising new life and environments if only we can plunge into its depths. Yet somehow we are unable to take that plunge. The recording engineer, like the listener, is an observer here rather than an intruder. We do not approach this music; it approaches us, and it can only come so far before receding into its womb.