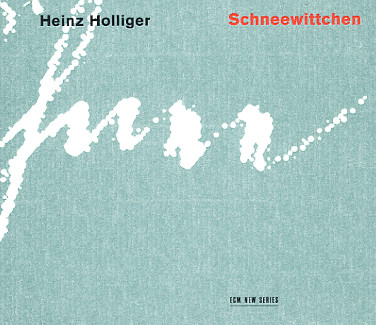 As a self-proclaimed “musician whose medium begins where words end,” Heinz Holliger may seem an unlikely candidate to attempt a full-length opera. Yet looking at his source text, the idiosyncratic and delightfully schizoid Schneewittchen (Snow White) by Swiss writer Robert Walser (1878-1956), one senses a kindred spirit in the latter’s semantic approach. In light of this, Holliger’s adaptation is perhaps best described as a “subtextual” opera. As such, it begins in harmonic suspension before dropping into a confused milieu of verbal emotions. For Holliger, the job of the music here is to mask the characters on stage, thereby providing them with extension cords to fasten to their utterances.

The Prologue opens with an evocative and programmatic arrangement of wind gusts and tinkling icicles giving way to an eerie congregation of glassy voices and drones. Reminiscent of quieter moments in his equally ambitious Scardanelli-Zyklus, Holliger’s sound palette immediately draws us into an evocatively unstable environment. This plaintive mood is quickly undermined, however, by the appearance of words. “Child, are you ill?” the Queen asks, as if the tremulous unease of the preceding sounds were the inner turmoil in Snow White’s powdery gut. Thus begins a brief exchange between mother and daughter on the nature of disease and sin. A Huntsman, lackey to the Queen, appears. He is an easy target for Snow White’s pessimism: surely, the Queen has enchanted him, she wonders. Although the seduction is questionable, he admits to taking part in her assassination. In his compassion, however, he has killed a deer in lieu of her undamaged body, sucking its blood with reckless abandon. Fed up with this foolish talk, the Queen proclaims her maternal love, even as the Prince indulges Snow White’s fantasies of deception. He escorts Snow White to the castle that she might have the mental room to work through her grief.

The Prince’s proclamations to Show White in Scene II seem to echo the opera’s own methodology: “How merry is your word alone. Enraptured by its wealth, my ear hangs in a hammock, as it were, of hearkening, dreams of violins, of lispings, nightingales’ sweet sobs, love twitterings.” What follows is a profound, if tongue-in-cheek, parry-and-thrust discussion of sensuality and silence. The music ruptures as the Prince perversely describes the Queen’s sinful coupling with the Huntsman, made all the more ominous by keening voices in the background. Snow White proclaims, “Oh, I want nothing more, you see, than to be dead and smiling,” and sends the Prince on his way for lack of resolve.

Scene III finds Snow White and the Queen in a metatextual argument: the Queen touts her wicked past as laid out in fairy tales, while Snow White seeks to problematize her mother’s ill deeds for the sake of empowerment. In Scene IV the Prince returns, only to profess his love for the Queen over her daughter. The Huntsman joins in the fray, whereupon he is ordered by the Queen to reenact Snow White’s death. Before long the scene devolves into laughter, exposing the farce within. The opera’s resolution reflects the dangers of relying upon narrative to dictate the flow of one’s life. The ambiguity of Snow White’s past remains paramount, even if recast in the familiar mold of resolution, cracked as it is at the edges, like the metallic sheet of strings that brings the opera to a close.

Whereas Holliger is normally used to composing from the inside out, in writing this opera he felt required to do the opposite: that is, to open himself to spirited ideas flickering beyond the immediacy of his own embodied self. Schneewittchen represents a rare fusion of what Roman Brotbeck calls “mono-perspectival” and “poly-perspectival” opera. By this he means to say that both Holliger and Walser shine through the weave of the opera as a whole, while at the same time the authors’ voices and collective presence are destroyed, torn into self-sufficient shreds of identity untraceable to their hosts. Holliger’s aural façades serve to heighten this sense of disguise. The Walser text is mediated through, to borrow again from Brotbeck, “negative translations”: the opera is vocally driven while also dependent on the hints of implosion wrought into its language. The instrumentation reacts to these voices in kind. It bobs and sinks across a floe-laden ocean, multiplying like cell cultures in time-lapse film. Needless to say, the musicianship is as meticulous as the opera it brings to life and matched by weighty yet effervescent singing.

Unlike some operas, I find it difficult to listen to Schneewittchen without the libretto in front of me. It is so closely bound to its text that the two feel one and the same. Holliger has produced a rare achievement. Not unlike Walser in his postcriptorial treatment of a canonic tale, he has laid his source to rest in order to air it from the rafters of his own distinctive vocabulary.