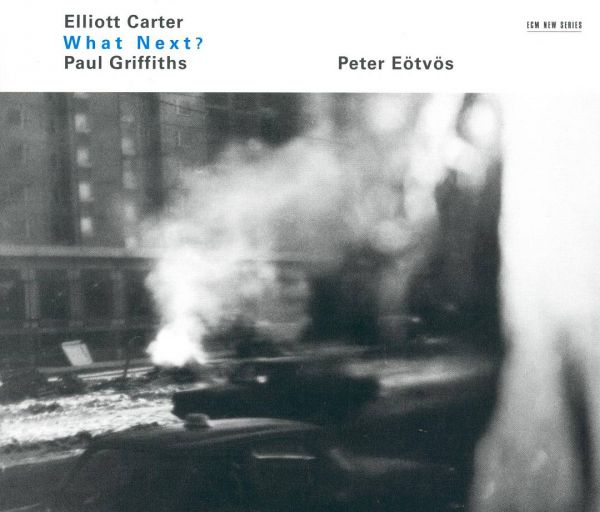 Elliott Carter
What Next?

“Wherever we go, words have been there first.”

Imagine you are driving along a busy metropolitan street. On the passenger seat is your latest score. Having made some hasty but crucial changes just in time for the premier performance, you floor the gas pedal in a paroxysm of anticipation. Your hands itch for the baton. As fate would have it, however, your life compresses into a single dot of light. When you come to, you awaken to the reality of a near-fatal crash. Score pages rain around you, many burnt to mere fragments of their former selves. You scramble to gather them into something coherent, stitching them together with nothing but your own determination. Dash a little Sartre on this scene, stage it, then pull the existential rug out from under it, and you begin to approximate the feeling of What Next?, a one-act opera (Elliott Carter’s first and only after decades of false starts) inspired by the brilliant 1971 Jacques Tati film Trafic.

The proceedings ignite in a metallic whirlwind of sound: the traffic accident as afterthought, recreated in fragments of trauma’s own trauma. Voices enter as if hewn in shards of glass, dying in reverse to their original shape. “Starts are always an embarrassment to us / for we are creatures of eternity / and each new beginning is only a new illusion.” So says Zen, one of six survivors working their way through the wreckage. Rounding out the sextet are Mama, her son (indecisively named “Harry or Larry”), his wife-to-be Rose, and the mysterious swath of a character known as Kid. As Mama’s former husband, Zen knows a thing or two about life’s little tragedies and makes no qualms about showing it. His tongue-in-cheek self-awareness is taken up by Rose, the natural born performer, who begins her aria as if addressing the metaphysical orchestra: “Più andante, maestro.” And while the adults monopolize most of the fun working through to their ends, I find Kid to be more consistently intriguing. His language cuts through the haze of parental distanciation, holding fast to gut reactions in the face of studied response. Hearing him, I cannot help but think of the frog in Janáček’s The Cunning Little Vixen: direct and ever the voice of playful reason (it is perhaps no coincidence that Kid, too, has the final word). Mama tries to console him, shielding him from the painful reality that drapes their muddling philosophy like a wet blanket. “Think of this as a game,” she insists, for indeed their predicament is nothing but. The opera’s occasional lyrical moments—such as the ravaging solo “Stella cannot explain”—are all the more heightened for the jumble of their periphery. Conversely, certain moments are parodically hilarious, as when Rose and Harry or Larry claim to have heard something, to which Zen quips, “Unless the sound of one hand,” followed by a blatant percussive clap. Despite a penchant for self-indulgent rhetoric, Zen does break out now and then with solemn wisdom. “Whose eyes can we use to see what we are?” he interjects as the survivors grope for a plan of action. Ironic, to be sure, for action is one thing this opera clearly lacks. Toward the end, the potential wedded bliss of Rose and Harry or Larry crumbles before our very eyes, even as we question the soundness of its foundations; the significance of the accident dissolves as everyone retreats into their own anger; and personal foibles reign supreme over the threat of the almighty superstructure. Contrary to what the unfinished ending might imply, there is nothing elliptical about What Next?, having by now forgotten its own beginnings.

What Next? is nothing without its text, penned from the steady hand of Paul Griffiths, whose reprinted diary in the liner notes allows us a rare glimpse into the dramaturgy therein. Librettists are the drummers of the operatic world: their rhythm-keeping is taken for granted. Yet one can hardly ignore the words here, as they are the bones and the flesh of the opera, while the orchestra wafts like afterthoughts in response to each precious cell of exposition. Put simply: the words are affect, the music is effect. Griffiths works both in a linguistic see-saw of pathos and obscurity, placing us squarely at the fulcrum throughout.

Composed at the cusp of his ninetieth year, Carter’s opera explodes with the vitality of one in his ninth. The textures are akin to a family reunion, disjointed and confusing while also making a bizarre sort of sense through some hidden genetic continuity. Solo voices are often bolstered by wordless syllables from supporting characters in a scat-like dribble, so that no one is ever alone, bound by the cruel aftermath in which the cast finds (or loses?) itself.

The Asko Concerto provides a constellatory coda. This instrumental runaround of fiery spirit partners well with What Next? It doesn’t so much pick up where the latter left off as it picks us up where we have been dropped in the wake of Kid’s half-utterance. In a way, it feels like a programmatic speculation of the action that could have been, breathing like an asthmatic in recovery.

Carter’s music is tirelessly multi-dimensional and demands an open and patient ear. I cannot help but think that these two pieces were dashed out in a frenzy of creative impulses, even if both strive for practiced cohesion in the face of their own instability. Regardless of whether or not this disc can be called “enjoyable,” it never fails to fascinate, frustrate, and stimulate with its surprises and unflinching attitudes toward mortality.