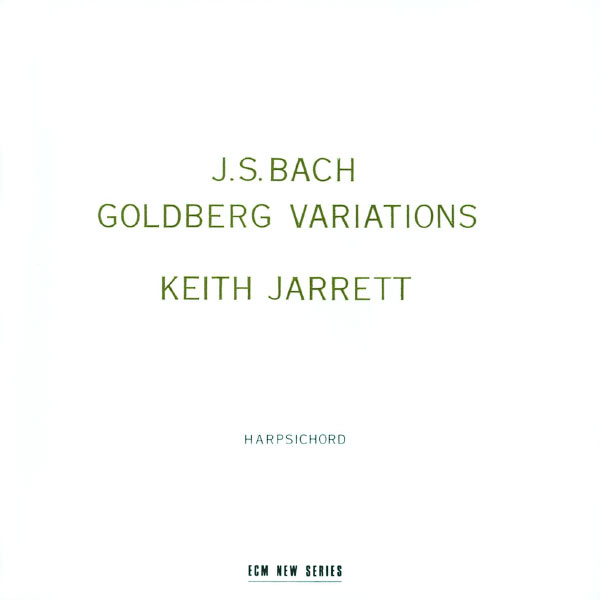 Although the original 1741 title page of the Goldberg Variations reads, “Composed for connoisseurs, for the refreshment of their spirits, by Johann Sebastian Bach,” one need hardly be a connoisseur of any kind in order to feel one’s spirits refreshed by this superb collection, the informal conclusion to the composer’s so-called Klavierübung, or “keyboard exercises,” which also includes the Opus 1 partitas. For his own rendition of the Goldberg, pianist Keith Jarrett has made an admirable decision in opting for the harpsichord, just as he did with his ECM recording of Book II of Bach’s Well-Tempered Clavier. Unlike the many piano recordings of these significant miniatures, all of which of course have their own merits, the harpsichord lends a certain quality of immediacy and uncompromised revelation to Bach’s music that is otherwise impossible to elicit. The opening Aria glows with the benefit of experience, a long look back at a full musical life that continues to burst forth with ever-inventive ideas, and sets the stage for the thirty variations to follow. The first of these immediately injects energy into the theme with effervescent syncopation. The fifth variation is a lively miniature in which the right hand remains centered at the keyboard as the left leaps back and forth across it. The seventh is a lively gigue in the French style, and the eighth mesmerizes with its stepwise chromatic flair and little waterfalls of thirty-second notes that close each section. The fugal tenth circles like a merry-go-round of trills and regular punctuations. For the thirteenth variation, a quaint sarabande, Jarrett makes clever use of the buff stop in the left hand, drawing out the piece’s inner gentility all the more. With its descending trills and gorgeous contrapuntal resolutions, the fourteenth overflows with an electrifying energy. The grandiose sixteenth is like a series of temples that keep getting torn down before they can be completed, but which remain standing just long enough to etch the firmament with their majesty, while the twentieth blossoms in a sweeping toccata of virtuosic proportions. A ring of arabesques lays the foundation for the twenty-sixth, which gives a harder pull on the collection’s red thread. The variations end with a recapitulation of the opening Aria, bringing the music full circle in its infinite wisdom.

Jarrett’s fingers are as committed as always, navigating the music put before them with practiced dexterity. The recording is somewhere between internal and external, capturing the nuances of its Japanese-built harpsichord with all the respect they deserve. Ultimately, the Goldberg Variations are more about affect than effect—which is to say they find permanence in their expressivity rather than in their emotional consequences—and the Jarrett/ECM partnership has produced yet another fine recording of music that should never go out of style.