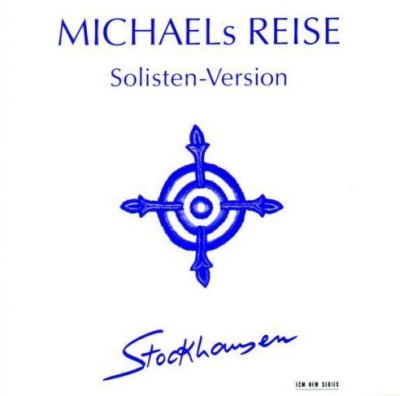 Karlheinz Stockhausen’s MICHAELs REISE (Michael’s Journey) makes up the second act of Donnerstag aus Licht (Thursday from Light), the first opera in the German composer’s 29-hour Licht cycle, and follows the archangel Michael as he treks across this mortal coil. In this 1984 version for soloists we are treated to a more reductive, though no less effective, take on what was originally a larger orchestral affair. A percolating opening statement from a varied brass section introduces the potency of Stockhausen’s highly mathematical approach. From this cacophonous opening we get a string of drones, pulled like taffy until it slowly sags into the yawning mouth of oblivion. A muted trumpet raises its hand to be recognized, breaking the surrounding silence with affirmation. We find ourselves in a street where the signs have been forgotten, a place where language no longer applies, and only the numerically inclined may press on—and indeed, at key points the musicians offer whispered numbers to the ether. There is anger in the air, but its source is long extinguished; smoke where there was never a fire. The journey seems infinite but is over in the blink of an eye. Cobblestone streets overlap with skyscrapers and uninhabited tundras; children fade into wolves, village elders, and back into children; music becomes one with speech and time. And throughout this melding of dimensions, every instrument holds on to its equation as if it were a secret to be coveted.

A perusal of the instrumentation is enough to give one a sense of the tonal colors to be expected, and I can only hope the above describes the feeling of the recording more than its sound. Stockhausen, sadly lost to the world in 2007, has been accused of being many things: everything from brilliant (“One of the most important composers of the twentieth century”) to overly ambitious (“A 29-hour opera cycle?!”) to utterly self-indulgent (see, for example, critical reactions to his Helicopter Quartet). For me, his risks were always supported by a steady dedication to his craft, turning seemingly gimmicky conceptual arrangements into acts of wonder. True to his aleatoric roots, Stockhausen never failed to pursue a line of thought to its most logical conclusion. His son Markus, who would go on to create a handful of inventive albums for ECM, is cosmic here on the trumpet. Then again, as the center of such an astrologically oriented piece, one would almost have to be. The same goes for his “teammates,” each of whom exhibits an intimate understanding of the composer’s great vision. Anyone unsure of how to approach Stockhausen’s music from the outside in may wish to start here, from the inside out.