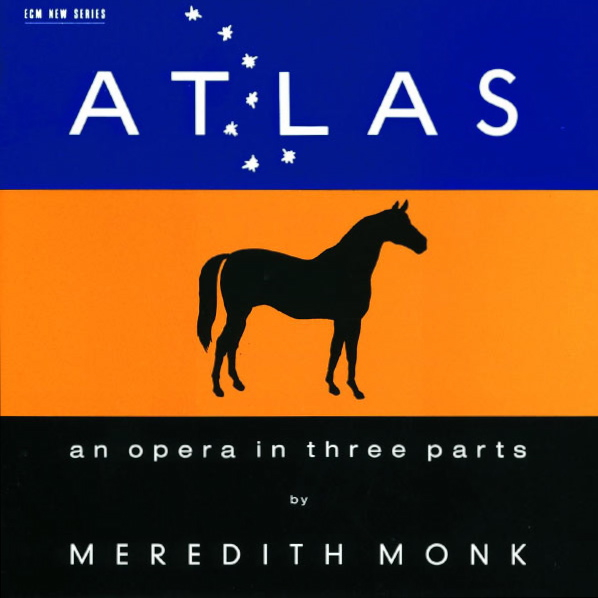 Meredith Monk’s first opera Atlas received its premier at the Houston Grand Opera in February of 1991 and is by far one of her most beautifully realized works. Much of the opera came to the studio in sketches, only to be solidified through improvisation and the synergy of performing with a handpicked group of singers. Inspired by Alexandra David-Néel’s classic book Magic and Mystery in Tibet, the opera’s three acts trace the personal quest of its heroine, also Alexandra, through a life rich in material and spiritual experience. The libretto is so scant that it fits snuggly into this review in its entirety. And while the lack of words certainly challenges operatic norms, it is to no ill effect. If anything, it heightens the work’s profundity.

I. Personal Climate
A young Alexandra takes solace in the domestic comforts of her girlhood, all the while dreaming of what awaits her once she goes out in the world. A minimal overture opens into the comely “Travel Dream Song.” Keyboard arpeggios and a small instrumental ensemble cradle Alexandra’s yearning in a tender embrace. She looks skyward on her swing, running through the majestic details of a life lived in transit:

After the haunting overtone singing of “Rite of Passage A,” we come to a crucial intersection in the opera’s crossroads. “Choosing Companions” presents Alexandra’s recruitment of the travelers who will help make her dream a reality. A knock at the door introduces each potential companion, who arrives with a résumé of attributes. The first knock reveals a man who speaks in Mandarin before continuing in English:

Wǒ hěn jiānqiáng.
I am strong.
My heart is broken.
I am a good cook.

The Chinese translates to “I am strong,” and the repetition in English opens a linguistic crack in the opera’s already fragile edifice. Another knock, and in walks a boastful, well-seasoned adventurer:

I own my own equipment.
I’ve got a strong stomach.
I’m good looking.

I have desire.
I have a dry sense of humor, good hiking boots.

Each of these spoken lists is followed by a bit of singing meant to convey the constitution of each character, and takes a rather humorous turn when the egotist sings terribly off key despite his most valiant efforts. “Airport” is the most complex section of the opera, and builds to a fiery climax as a man intones, “Three, Four, One,” until silence overtakes him.

II. Night Travel
This central section features some of the most eclectic sounds in the opera. From the exquisite introductory melody to the apocalyptic “Possibility of Destruction,” we are treated to a sort of aural travel by which the listener is transported along with its subjects. Of note here are the working songs of “Agricultural Community,” and of course Janis Brenner’s brilliant banshee-like vocals and Shi-Zheng Chen’s fearful tremors in “Hungry Ghost.” A glass harmonica introduces a major climate shift in “Ice Demons,” carrying on with laughter and thematic resolution. “Explorer #5” brings more spoken text into the fray:

She can hear for miles.
She is very patient.
She has royal blood.
She drives both shift and automatic.
She has a green thumb.
She can read Sanskrit.

Soon after, the supremely evocative “Forest Questions” bubbles with turgid vocabularies, wailing sirens, and lupine howls. Here, the travelers happen upon the world’s oldest man, of whom they ask:

Has anything changed?
Can I find love?
But I still hear noise.
What is pain?
Will all this last?

If any answers are given here, they are lost in the music, for in being asked they are already gone. “Desert Tango” and “Treachery (Temptation)” provide the opera’s most frivolous moments. The latter in particular is an amusing, almost Heiner Goebbels-like gallery of fools that takes pleasure in drowning in its own vanity:

III. Invisible Light.
The final act is all about reflection, as Alexandra looks back on her life and recounts the ups and downs of her journey. This act works more as a cohesive whole, and in “Explorers’ Junctures” provides a detailed aural map of its entire musical landscape. “Earth Seen From Above” is the most divine portion of the opera, melting into “Rite of Passage B,” which leaves us floating in the upper atmosphere.

Although the staging of Atlas adds a vital component of movement, the “incidental” soundtrack is no less powerful here for its absence. This is motion personified in sound, the poetry of life’s easily forgettable details wrapped in a cloud of human contact. Behind closed eyes we can feel the primordial depth of these performances and of the final destination they seek to illuminate, so that by the time we open them we are already there.