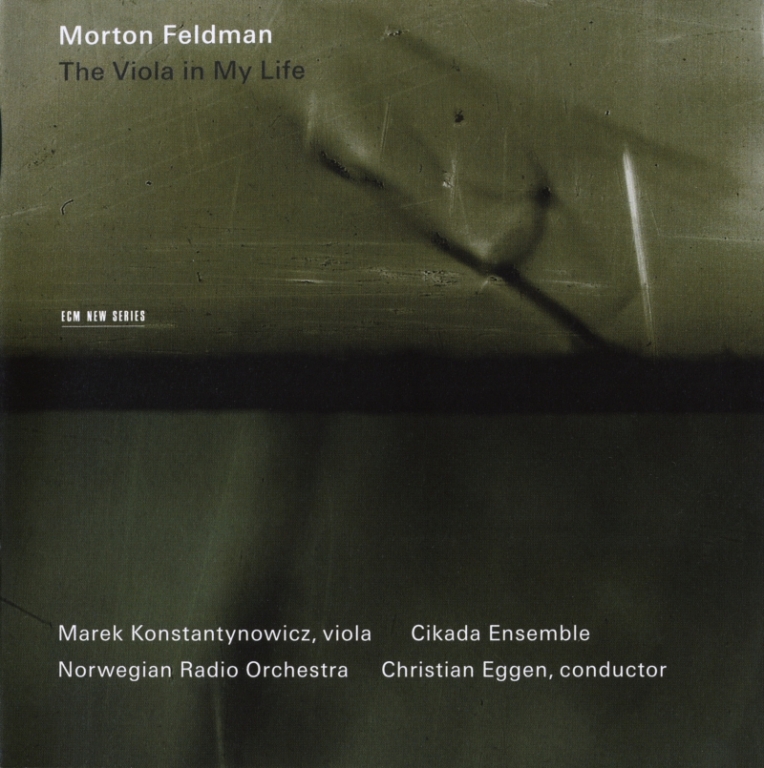 Morton Feldman
The Viola in My Life

Morton Feldman’s The Viola in My Life (1970/71) is a work of great scope and detail. Each of its first three parts is scored for viola and a variety of chamber ensembles, while the last pairs viola with orchestra in what Feldman calls a “translation” of the first three. Unlike his earlier forays into indeterminacy, Viola is thoroughly composed. Its genius lies in Feldman’s ability to forge massive amounts of empty space into a layered resonance that is anything but “minimal.” The music slowly undulates in tune with the viola’s crests and fades, touched by patches of darkness like a figure slowly walking through lattice-obstructed sunlight. The viola is the center around which the other instruments revolve. This revolution brings the listener full circle with each new phrase, for despite the seeming regularity, each marks an uncertain orbit. The piano in parts I and III grazes the edges of silence, in pursuit of nothing but its own pursuit; the celesta in part II dots our minds with stars; and the orchestral backdrop of part IV carries the viola like a feather riding an upward breath. Such ethereality harbors no romantic promise of freedom. As Feldman himself admits, “The viola’s crescendos are a return to a preoccupation with a musical perspective which is not determined by an interaction of corresponding musical ideas—but rather like a bird trying to soar in a confined landscape.” Eventually we must reperch, and Viola is constantly skirting the boundaries of our cage like a silent but ever-watchful eye. And as I drift off to sleep during the final movement, I feel the eye closing around me, like a lost child embracing himself in lieu of human contact.

This album could easily be titled “The Life in My Viola,” for it is so rich with intimations of a generative spirit. The recording and performances are finely attuned to the music’s inner core, the Cikada Ensemble creating a fine setting for Marek Konstantynowicz’s restrained soloing throughout. Morton Feldman can be a challenge, but his rewards can be even more internal than his music.