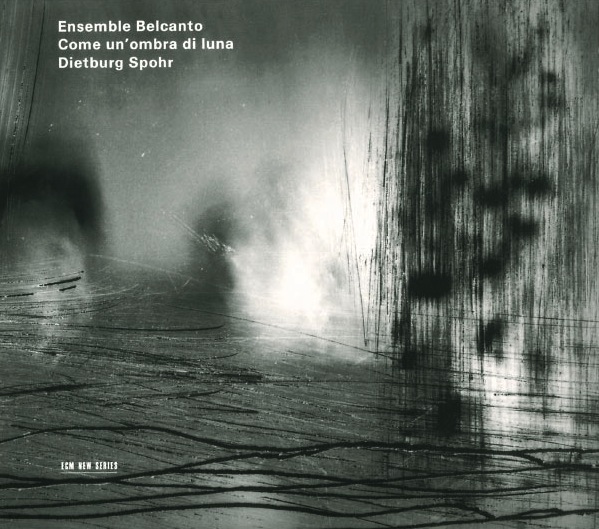 I have at home a blue piano
and yet know no note.
–Else Lasker-Schüler

My first encounter with Ensemble Belcanto was on an extraordinary recording of Klaus Hinrich Stahmer’s Hommage à Daidalos on the ProViva label, which combined Belcanto’s rich voices with the sound sculptures of Elmar Daucher (whose resonating stones also found their way into ECM via Stephan Micus’s The Music Of Stones). The ensemble was formed in 1986 by mezzo-soprano Dietburg Spohr as a springboard for new music activity and has since honed its skills in a variety of percussion instruments. The ensemble’s depth of performance is clearly seen in Haim Alexander’s Mein Blaues Klavier (1989-90), a setting of four poems by Else Lasker-Schüler. Although the piece inhabits a tight chromatic range that steps just beyond one octave, the singers manage to expand its borders through a wealth of gingerly applied drums, gongs, triangles, and other accentuating paraphernalia. The ritualistic arrangements lend the voices a flavor of incantation, each word seeming to bring about a discernible change in the music’s countenance. Mein Blaues Klavier is severely analytical without being clinical, especially in its final section, in which repetitive clangs probe deeper into self-inflicted wounds.

This is followed by two a cappella settings. The first, Konrad Boehmer’s Un Monde Abandonné Des Facteurs (1996), is a wavering slog through its text. The composer’s Darmstadt School roots are on full display, voices bristling with his teacher Stockhausen’s same penchant for the instability of the utterance. The 1997 title composition comes from Fabrizio Casti. His is a haunting weave of darkness and light that burns like the calls of sirens in one’s head.

We close with Wolfgang Rihm’s Séraphin – Stimmen (1996), a magnificent cartographical exploration of wordless territories. It is the most minimal piece on the album, and all the deeper for it. Rihm’s use of percussion is most adept, and seems to be directly influenced by Noh theatre, where a single wood clap can accentuate an emphatic syllable, and where the beat of a drum can synchronize an action or gesture, infusing it with intense programmatic effect. Also like Noh, the piece makes the most of silence and its implied sense of movement. And in fact, the entire album has the feeling of something staged, inhaling and exhaling through its dramaturgy.

While every voice here is superb, Spohr’s stands out for its technical breadth and for possessing one of the most engaging vibratos I have ever heard. The ensemble as a whole shapes every syllable with strict attention, elongating certain syllables and severely shortening others. Such textual detail is always such a pleasure to hear, for rather than trying to fit a text into a predetermined musical structure, Spohr and her companions adapt their sound to emergent vocal surroundings. Again, this speaks to an explicit root in drama, for ultimately these pieces are like plays of the mind, populated by characters of one’s own making.