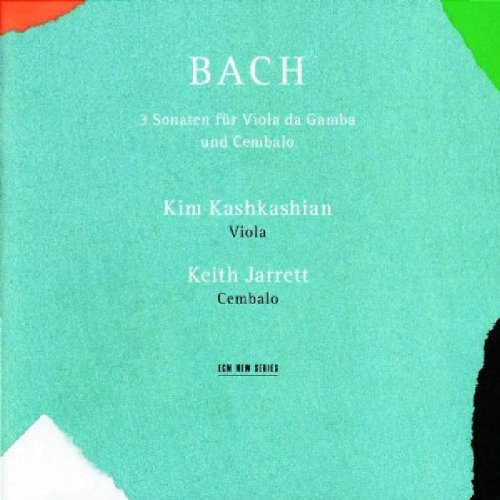 The exact dates of Johann Sebastian Bach’s Sonatas for Viola da Gamba and Harpsichord are contestable. We do know they were composed sometime in the 1740s, making their unity as a set tenuous at best. Still, on their own, they glisten with the genius that bore them. Though more commonly played on the period instruments for which they were written, one may still find the occasional cello filling in. On this recording, we find a unique substitution in the viola, which shares hardly more than a name with its predecessor. This is accomplished by transposing any notes below the viola’s range, making for a relatively buoyant sound. Purists take note: this is, in my humble opinion, the finest interpretation of these much-recorded sonatas. Admittedly, this opinion is as much informed by the fact that it is the first I ever heard of these works as it is by the stellar musicianship that follows Keith Jarrett and Kim Kashkashian wherever they go.

The opening Sonata in G BWV 1027is a warm embrace of Baroque elegance. Jarrett captivates from bar one, his continuo providing bold bass lines as Kashkashian’s deeply sustained tones guide us through foggy waters. The second movement, while airy enough, manages to support its fill of weighty trills and rhythmic spontaneity. The Andante establishes an even tighter bond as Kashkashian dots the i’s and crosses the t’s of Jarrett’s solid arpeggios. A rather bold intimacy is maintained throughout, lending the movement an almost orchestral fullness. It is at such moments—i.e., those where expansive instrumental coverage is implied through rudimentary means—that Bach’s creativity sparkles. This tightly knit synergy carries over into the final movement as the viola harmonizes with Jarrett’s sharply syncopated left hand before doing the same with his right. The harpsichord then takes the lead as the viola provides further diacritical accents to a smooth finish.

The lush Adagio that begins the Sonata in D BWV 1028 glows like a dying fire. It dangles on an unresolved note before diving headlong into the magisterial Allegro that follows. Another beautiful Andante awaits, this time led strongly by the viola, again harmonizing with the left hand, while another confident lead-in to the final Allegro births contrapuntal bliss.

The real tour de force here, however, is the Sonata in G minor BWV 1029 that closes out the trio. The angled playing of the opening Vivace describes an exultant rejuvenation. The viola seems to find purchase in every nook and cranny carved out by the harpsichord in anticipation of the potent repeat; every precisely measured note of the Adagio sends off vibrations of the utmost gorgeousness; and the concluding Allegro is introduced by a fibrous dance which is immediately spun by the viola into an indestructible c(h)ord. The riveting descending motif at the end rings in the heart long after its completion.

The range of sound from Jarrett and Kashkashian impresses as the powerful duo navigates Bach’s intricate contours with active precision and an overarching sense of freedom. Kashkashian’s warm, sandy tone meshes so well with Jarrett’s lively harpsichord that one would seem the symbiote of the other. Upbeat tempos and a gracious resistance to filler material clock the album at a modest 39 minutes. But with such enthralling music to be had, captured at the height of passion, the urge to listen afresh is only intensified. Easily one of ECM’s finest New Series releases, and a resilient exemplar of the label’s fresh take on the tried and true.