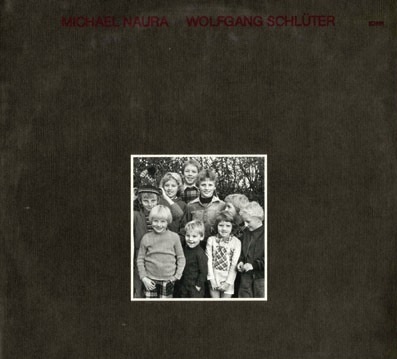 Oftentimes, when pouring through the back catalogue of any label’s out-of-print releases, one stumbles on a few clunkers before arriving at any forgotten monuments. In my listening experiences thus far, ECM has flipped this dynamic considerably, offering a wealth of musical history to explore and appreciate. Among the ruins, however, is this humble little project, lost to the age of the label’s brief SP imprint, which lasted all of three albums. Country Children brings together pianist Michael Naura, whose music graces most of this set, and Wolfgang Schlüter. Originally trained as a drummer before a knee injury led him to mallet instruments, Schlüter cites Lionel Hampton (who he heard live in Berlin in 1952) and Milt Jackson as early influences. After a stint with the Michael Naura Quintet, which dissolved due to Naura’s illness, he played with the NDR Bigband for three decades. Since then, he has focused on teaching and remains one of Germany’s most formative vibraphonists.

“Ballade für eine Silberhochzeit” is a lush opener, almost the shadow of Gershwin’s “Summertime.” Over a beautiful two-chord ostinato, vibes dance exuberantly in a tightly restricted space, but with resplendent melodic freedom. “Schlafen” is a heavily improvised stem with the occasional blossom of composed material. Whereas its heavily convoluted beginnings might elsewhere seem a turgid dream from which one awakens into consonant resolution, here they imply the opposite: an opening of eyes within in sleep’s promised dream. “Take Us Down the River” is more exuberant, much in the vein of Keith Jarrett in the throes of a re-imagined standard. “Argentina” is alive with urban energy, a subdued elegy for remembered villages and mountains. The piano here is paired with a sprightly marimba, making for a drier and more evocative sound.

A flip of the record to Side B brings us to one of the most heartfelt renditions of Krzysztof Komeda’s theme from “Rosemary’s Baby” you are ever likely to hear. This is followed by the title track, which feels steeped in an unnamed nostalgia. “Sad Queen” is another stunner, and my favorite among the album’s originals. “Variation auf »Abendlied«” is dedicated to Peter Rühmkorf, the highly influential German writer whose voice appears alongside Naura and Schlüter in the first two ECM SP titles. It is another lovely offering, consolatory in its gentle persuasion, a track of subtle boisterousness filled with an abiding energy. The final track, “Call,” ends the album on a bittersweet note.

These musicians are like two halves of the same instrument. Their collaborations are beautifully conceived and executed, and make for a fitting complement to such likeminded pairings as Chick Corea and Gary Burton. It’s a wonder this album has yet to be reissued. I would think that, especially with the nod to Komeda, it would fit snugly alongside François Couturier’s Nostalghia and Tomasz Stanko’s Litania. This is a gorgeous and wide-ranging album, one equally fit as the background to other activities or for relaxed deep listening. An unsung gem, and easily one of my top picks currently vying for freedom from the ECM vault.