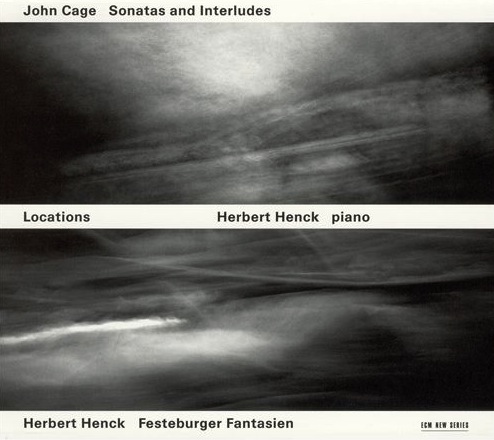 I remember seeing in my teens a documentary about John Cage (the title unfortunately escapes me), in which two seemingly bewildered elderly women are eying the auditory visionary in question as he darts around a concert hall with portable radio in hand. Rather than balk at him, as the viewer is led to expect, one of them simply smiles and says something to the effect of, “Oh look, there’s John, doing this thing.” This endearing moment stands out for me not only because of Cage’s ability to provoke childlike wonder in people of all ages and backgrounds, but also because “doing his thing,” as it was so aptly put, was for him a way of life. I like to think the same holds true for a pianist like Herbert Henck, whose fearless approach to making music is nowhere so explicit as on this timely double album.

The prepared piano is the quintessential Cagean innovation. It exemplifies not only his unwavering interest in play, but more importantly his infectious lucidity. I first heard the prepared piano on the essential Cage tribute album, A Chance Operation (1993, Koch International Classics). The pieces in question were the Three Dances, as played by Charles “Vision” Turner. That congregation of twangs, curtails, and jangles was a gamelan master’s most beautiful nightmare and unlike anything I had ever heard. Henck’s love for indeterminacy is as rejuvenating as his interpretations of the seminal Sonatas and Interludes found here. They are the most well known pieces for the “instrument” (though I am rather tempted to call it a “process”), which is saying much, considering that their fallibility is so markedly present in every utterance. Henck ensures that the pieces’ inner operations are never obscured. Some come across as intensely mystical (Sonata VII) through a depressed sustain. Others are more nervous (Second Interlude). Henck’s preparations encompass a thoughtful spread of percussiveness and vocality, and sometimes all of the above, as in the ritualistic Sonata IX. If favoritism has any validity here, then I humbly embrace the Fourth Interlude as my one and only. Sonatas XIV and XV are also particularly stunning in their crystalline fragility. This is the puppetry of music, the dead brought to fantastic life by a nimble touch.

Henck’s own improvisations, collected here as the Festeburger Fantasies and realized in the spirit of Cage, are like a torrent of pent-up energy suddenly released—a hodgepodge of extended techniques, augmentations, and preparations. Like a ballroom dance gone horribly, albeit enchantingly, awry, they are simultaneously coordinated and tangled amid limbs and unfinished steps. The solos come across as majestic elegies, while in the overdubbed duos Henck seems to wring out as much musical nectar as he can before those particular intersections of space, form, and time elude him. Here is a musician’s entire life compressed into an hour’s worth of unbounded expression.

I can only imagine the challenges such a recording presents to the engineer. Nevertheless, in the hands of ECM every conceivable nuance comes through, pitch perfect and severely organic.