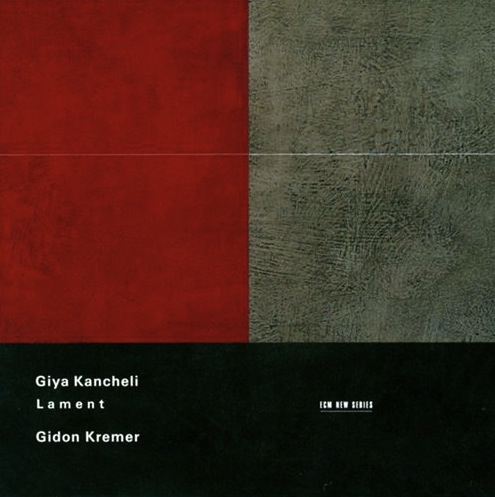 ECM offers some of Giya Kancheli’s most compelling music in Lament (Music of Mourning in Memory of Luigi Nono). This 1994 outpouring for violin, soprano, and orchestra is a requiem, a postlude, a concerto, and homage. It is also more than these, spreading its heavy wings wide across an ever-changing landscape. Kancheli revisits the words of Hans Sahl, whose verses appeared upon the same lips in EXIL, this time through his poem “Stanzas.”

I go slowly hence from the world
Into a domain beyond all distance,

Gidon Kremer’s violin seems to arise from a shadow within a shadow. Soon joined by flute, which acts like a hooded guide through the wilderness, Kremer flirts with his surroundings. The orchestra responds provocatively to these agitations, only to blend back into the woodwork from which its sounds are born. As strings wander toward the horizon, every bowed step seems only to bring them closer to me, as if I were but a projection of a faraway self.

The wind continues its gentle flight, weaving through orchestral punctuations like a suture through flesh. These satoric bursts never last. Their clarity is brief, their catharsis even briefer. Kremer brings a raw, rustic tone, and with it a certain terrestrial quality to this otherwise stratospheric music. Unfamiliar skies and the mud-stained roads beneath them temper any possible thrill of discovery. And yet, the closer I walk to death, the brighter my surroundings seem to become.

I go slowly hence from time
Into a future beyond the stars,

Kremer’s lilting highs mesh beautifully with Maacha Deubner’s own as both pull the orchestra to a high summit. I leap without hesitation, floating ever so gently back to solid ground. Deubner seems to sing from somewhere not of this world. Her voice becomes a memory, something heard when I let down my mental guard. Kremer gets an equally magical sound from his instrument, leading the orchestra with utter determination.

And what I was and am and ever shall remain
Goes with me hasteless and forbearing,

Deubner sets aloft a high-pitched violin before oboe and orchestra spin their own guiding light out of ether. Familiar material works its way into my mental window: a rare comfort in these tattered vestiges, far enough removed from Kancheli’s motivic staples while also weeping in their shadows. I can only sit on the edge of music like this, never knowing whether to lie back or lean forward. And so I am resigned to the margin, left to wander

As though I’d not, or scarcely, ever been.