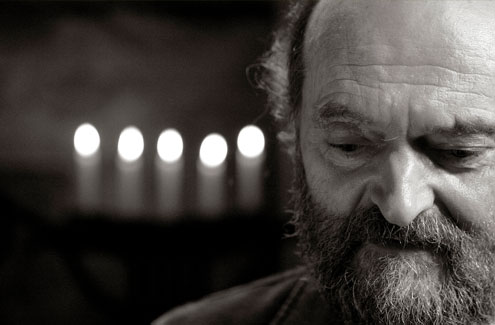 “The complex and many-faceted only confuses me, and I must search for unity. What is it, this one thing, and how do I find my way to it? Traces of this perfect thing appear in many guises—and everything that is unimportant falls away.”
–Arvo Pärt (photo courtesy of The Sonic Spread)

The composer
On 11 September 2010, Arvo Pärt welcomed his 75th year. To celebrate this milestone, ECM has rereleased its first New Series album in a special deluxe edition. When it first appeared in 1984, hardly anyone outside the composer’s native Estonia could have known what to expect from this modest cover of muted pastel and block lettering, but Tabula rasa has since taken on a life of its own. Yet behind the iconicity, word-of-mouth marketing, and a few choice celebrity endorsements (not least among them, R.E.M.’s Michael Stipe), Pärt’s music remains as it is: reverence in sonic form.

Born in the small town of Paide, just outside of Tallinn, Pärt took his first musical steps at age seven and was already composing by his teens. He would later study with Heino Eller at Tallinn Conservatory, where he was characterized as one who “just seemed to shake his sleeves and notes would fall out.” The sixties found him at a critical juncture in his creative life. Disillusioned by the serialism with which his early works engaged, and which had earned him the red pen of Soviet censors, he fell into silence and personal reformation. According to biographer Paul Hillier, this silence has been the alpha and omega of his subsequent musical output. It is the silence of death, a reminder of our spiritual origins and of life’s fragility. Out of this nexus arose his signature “tintinnabuli” style, which finds its harmonic roots in the overtones of the struck bell. One finds its power in every note, and through an allegiance so delicate it knows no other shelter than the human heart. 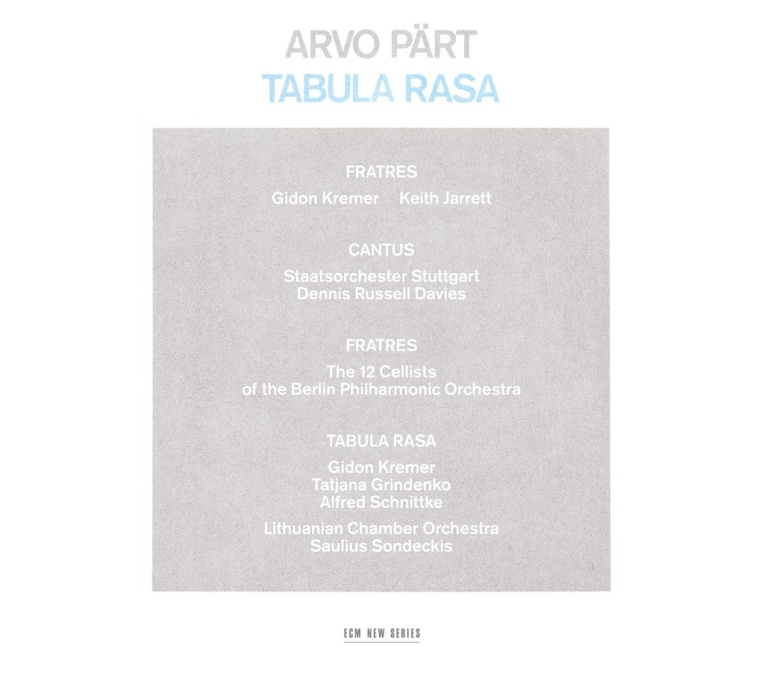 The music
Of the significant body of Pärt’s works represented by ECM, this album came relatively late in my listening. Nevertheless, its visceral power and openness to interpretation have yet to wane, for it has only grown with me. It is 1 a.m. as I sit alone in my study, listening to this seminal recording once again. I find myself filled with words but faithful to none of them. Each seems to go right through the music’s liquid surface.

We are graced with two strikingly different variations of Fratres. One of Pärt’s most successful compositions, it exists in many versions. The first represented here is for violin and piano (1980). The combined intuition of Gidon Kremer and Keith Jarrett shades this interpretation with frail determination. What begins as an energetic swoon of arpeggios soon coalesces into a dirge of heartrending poignancy in which pizzicato bursts puncture the visual landscape like dying flames. These percussive rituals are common to all incarnations of Fratres, and act as tactile pedal points. Passages bordering on the vocal swoop down to graze the piano’s gravid footsteps, even as we watch from a place neither near nor far. This is a space in which our ears and our emotions become one, and in this respect Fratres is an anthem for the spirit unafraid to drink its own tears. Title aside, for me there is something divinely maternal about this piece, especially as played by the 12 celli (1982) heard two tracks later. This version brings to light a clearer sense of the piece’s mathematical anatomy. The low grumbles of the piano are replaced here with the tapping of cello bodies. The air inside them is heard on its own terms, unfettered by the strings that lay just outside its escape routes. The cellists begin in whispers before proclaiming their tentative motif with due conviction. Each mirrored descent is a caress in a restless night, the knocking of wood like a boat listing slowly in darkening waters.

Bowing humbly between these two “brethren” is the Cantus In Memory Of Benjamin Britten (1977), a rarer secular piece from Pärt, who once said, “I have discovered that it is enough when a single note is beautifully played. This one note, or a silent beat, or a moment of silence, comforts me.” Nowhere is this truer than here, where a single tubular bell sounds that single note (an A) throughout, reflecting both the tonal and emotional veins of the piece. Having the score before me also reveals the silent beats that circumscribe the piece. Like the dead space between stars, this silence breathes with the potential for creation. Thematically the music is laid bare and layered with dizzying resolution, the sympathetic bell ringing as if from a great void. As homage to a composer in whom Pärt sought a kindred spirit, Cantus thrives with anguish and adoration. In its brief five minutes, it manages to reach past the listener into a realm where personhood is no longer relevant and music thrives on its own performance.

With Tabula rasa (1977), Pärt does more than wipe the proverbial slate clean, but spins from that same emptiness an open web of tangible effects. The title is both philosophy and mantra. Structurally speaking, none could be more appropriate. Violins circle one another like birds in flight before being awestruck by the haunting chimes of a prepared piano (played by the late Alfred Schnittke). Each successive eruption is deeper than the last, carrying with it the ghost of all that has come before. This piece is famous for having boggled its musicians on paper (“Where’s the music?” they are said to have cried), so bare did the score seem to them before being committed to fingers and bows. But once the music was given voice, it was clear that what had originally appeared porous was in fact pregnant with life-affirming rapture. Tabula rasa undergoes a dramatic change in its latter half as the violins begin to fade into the surrounding architecture. The carillon-like refrain of the prepared piano drops a child’s handful of crystals into water, naked and unassuming while also strangely coercive. By the end we are left in the company of solemn double basses, whose commentary seems but an afterthought to an experience that lies just beyond the grasp of words.

The book
In his original accompanying essay, Wolfgang Sandner describes the music on Tabula rasa as a “curious union of historical master-craftsmanship and modern ‘gestus.’” The same might be said of this handsome Special Edition. Housed in a 200-page hardcover book, the album is given the royal treatment with full study scores for all four works therein, two facsimile autographs of its title work and Cantus, and a new introductory essay by Paul Griffiths. As an artifact it is a tangible intersection of passionate commitment to detail from all angles.

The scores in particular offer even non-musicologists vast insight into their inner workings. We see clearly before us the peaks and valleys of Fratres in chamber form, and the drone strung below its cello counterpart like a safety net. We see also the cosmic structure of the Cantus, like binary stars bound by mortality. And we can experience for ourselves that confrontation with emptiness that must have so perplexed the first interpreters of Tabula rasa. A cursory glance reveals further shades of understanding. For example, we find that, in Part 1 (“Ludus”), sometimes only double basses accompany the two violinists with no noticeable loss of orchestral density, and each ascent on the prepared piano in Part 2 (“Silentium”) stands out like a stairway into light.

To say that Tabula rasa has held up perfectly would be misleading, for it would imply that it possesses physical substance to be upheld. As a whole this album is more about spaces: of mourning, of self-reflection, of impermanence, of privacy in a violent world, of virtue and history, of weakness and flesh, and ultimately of life itself. It is the undoing of forced representation. It is the challenge of confession. It is the hardship of conflict and the joy of affirmation. It is the silent rendered audible, and the audible rendered silent.