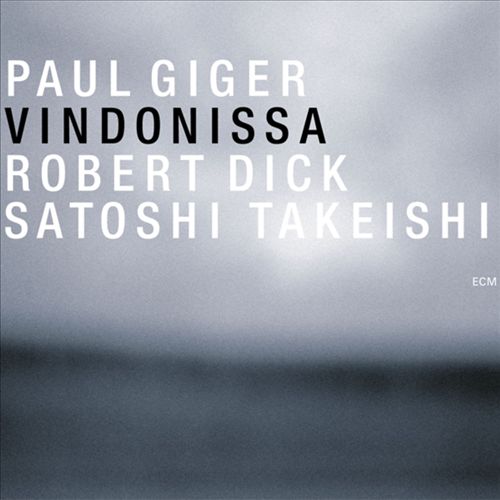 Modern-day gypsy, musical traveler, melodic nomad: call him what you will, but Paul Giger has created some of the most haunting music to ever grace your ears. Adding yet another branch to the bold tree that began with Chartres and which was expanded in three subsequent projects, the Swiss violinist/composer beguiles us yet again with this more whimsical, though no less trenchant, collaboration. On Vindonissa, he is joined by two outstanding musicians. Robert Dick is a truly revolutionary American flutist and composer who has taken his instrument to new heights. A pioneer in extended techniques, design, and improvisation, he is a welcome presence on ECM. Percussionist Satoshi Takeishi is a kindred itinerant spirit, and has worked with a wide range of musicians, including Anthony Braxton and Joe Zeytoonian. A skilled improviser in his own right, his openness to the musical moment is a no-brainer for inclusion here.

Giger bookends this yawning chasm of life with a meditation on solo violin from which the album gets its name, distilling from the chromatic banality of open strings a potent tincture of dissonance and transcendence. Such lone signposts dot the album with moments of pause, as in the lilting Introitus and Kyrie. The group tracks contrast with open spaces and colorful mysticism. Starting with the pointillism of Oogoogajoo and ending on the likeminded An Ear On Buddha’s Belly, these intersections of time and circumstance seem to grow organically, as if in waves. Dick and Takeishi walk comfortably alongside Giger, bringing vital human energy to the untouchable center of Lava Coils and even greater earthly care to Fractal Joy, the most profound triangle therein. Gloria et Tarantella, in which Giger rocks the viola d’amore to the beat of his own foot bells, is the album’s masterpiece and builds to a frenzy of Tartini-like exuberance. With every note, it burns a root and follows its smoke ever skyward.

Giger is easily one of the greatest violinists of our time, not only because of his technical prowess, but more importantly for his ability to grab hold of a melodic handle and never let go until it asks him too. Such talent can take some getting used to, especially in the presence of other musicians, but I think this is an album in which one can rest assured that a meeting of three bodies, minds, and worldviews can indeed find harmony through sound’s untold alchemies.