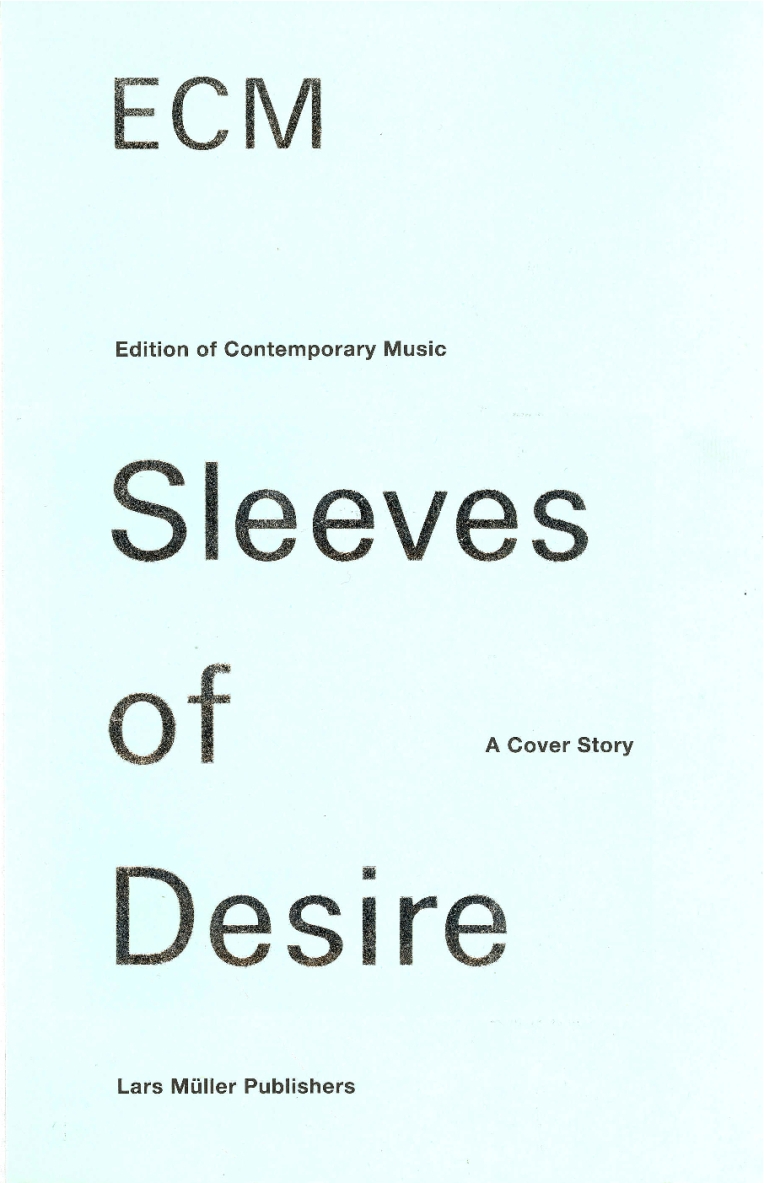 The seasons have changed
And the light
And the weather
And the hour.
But it is the same land.
And I begin to know the map
And to get my bearings.
–Dag Hammarskjøld

I once had a wooden train set. Its tracks dovetailed together like puzzle pieces and each car fit neatly into their grooves, linked by magnets at either end. Said magnets were weak and separated when the lead locomotive was pulled with too much force. So, too, do our changing notions of modernity. Though they may seem linked, each is held by a connection that would just as easily turn into repellence were its nodes reversed. As we open our arms to all things hypermodern, our trains are derailing, our allegiance to space is atrophying, and the desolation of post-apocalyptic landscapes is becoming the new norm by which all others are judged; an epoch in which space becomes its own territory and imbues emptiness with a gravid beauty all its own. This is the liminal scrapbook in which ECM has been quietly pasting its covers for over 40 years. In doing so, it has engendered distinct spatial coordinates through which the physical and the sonic are one and the same.

Search among the rubble and you may be fortunate enough to stumble across Sleeves of Desire: A Cover Story. Published in 1996, this first collection of ECM cover art is notoriously out of print (I am indebted to Columbia University for providing a library copy for this review) and now fetches exorbitant prices on the used book market. It seems rather counterintuitive that the lucky few should be able to profit by releasing this tome from ownership. Either way, it remains a unique archive of a label that has become known to enthusiasts as much by its clothing as by its underlying physique. Along with label brainchild Manfred Eicher and his design team, Lars Müller Publishers has created a profound, if now elusive, archive of an unmistakable journey.

Lifted from their covers like contact lenses, these images offer clearest insight into themselves, which is precisely how I choose to view them here. They do not merely constitute a “visual poem” that is complementary to the music they adorn. They are also auditory poems in and of themselves. Each sings to us. Take, for instance, the tactile crinkles of The Music Improvisation Company’s self-titled record from 1970 (ECM 1005): 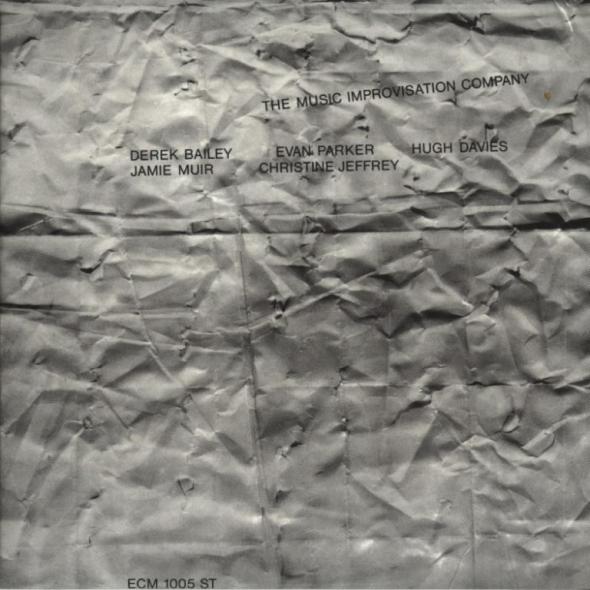 No image would seem to capture the essence of its attendant production more explicitly. Each random line, when viewed from afar, emerges as part of a vaster web of order. But not all ECM covers are so illustrative. Most are, in fact, starting points for deeper contemplation. Another early example is Paul Bley’s label debut (ECM 1003) with Gary Peacock of the same year, only this time we are confounded by a square of tattered canvas in sepia gradations: 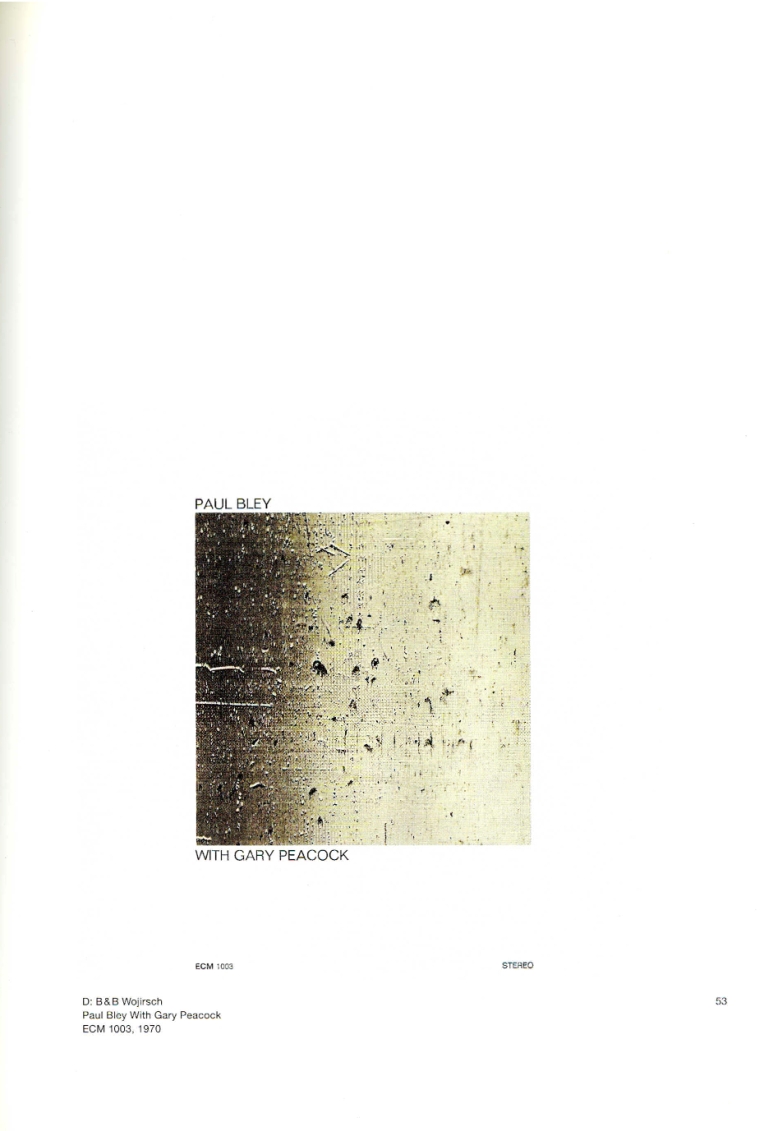 Such enigmatic touches would seem to be de rigueur at ECM, but are a far cry from the gimmickry of others who might enslave themselves to an aesthetic without forethought (or, for that matter, afterthought). Just as there is no such definitive thing as the “ECM sound,” neither is there an “ECM look.” Even the briefest perusal of the catalogue spreads in the back of the book is enough to confirm the label’s rather colorful history. 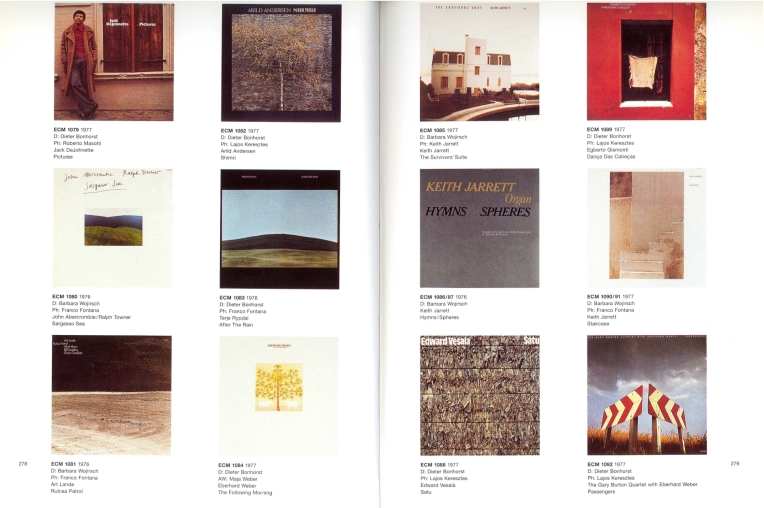 To be sure, the austere black-and-whites of recent decades, such as this iconic shot from Jim Bengston that adorns David Darling’s 1995 Dark Wood (ECM 1519), 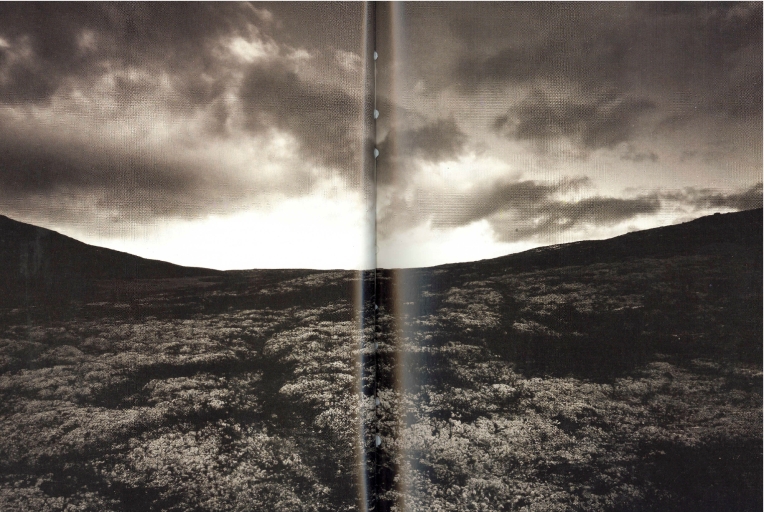 and those of many New Series efforts 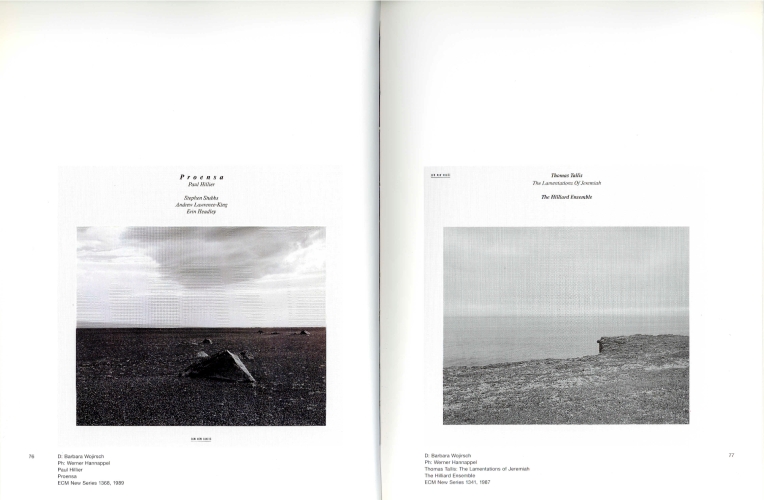 make their referential albums easily identifiable. Furthermore, Eicher’s monochromatic preferences have come to be reflected in CD reissues, many of which recast old color covers in black and white, if not dispense with them completely in favor of suspended text, as in the Old & New Masters series. Even so, we must reconcile these with the often-scarred collages of photographer Dieter Rehm: 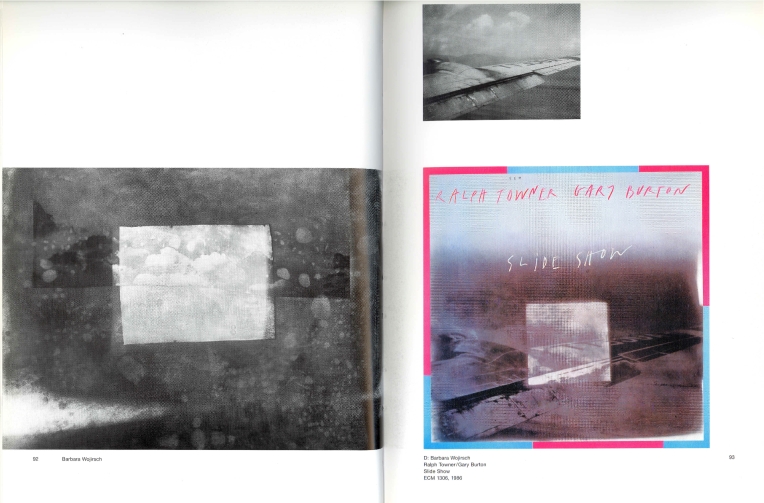 Even more “illuminating” is the rarely seen back cover,

where we find ourselves wired to the outside world.

One of the most satisfying consummations of the book’s titular desire is the rare privilege of seeing some of the images in their uncropped form, divorced from all typography, barcodes, and packaging constraints. One cannot help but marvel further at the work of Rehm, whose uncompromising commitment to imagistic immediacy is not unlike the melodic urgency of the musicians around which his art wraps. Rehm takes the familiar and obscures it organically, so that the promise of the open road becomes a Peter Tscherkassky-esque exercise in agitation 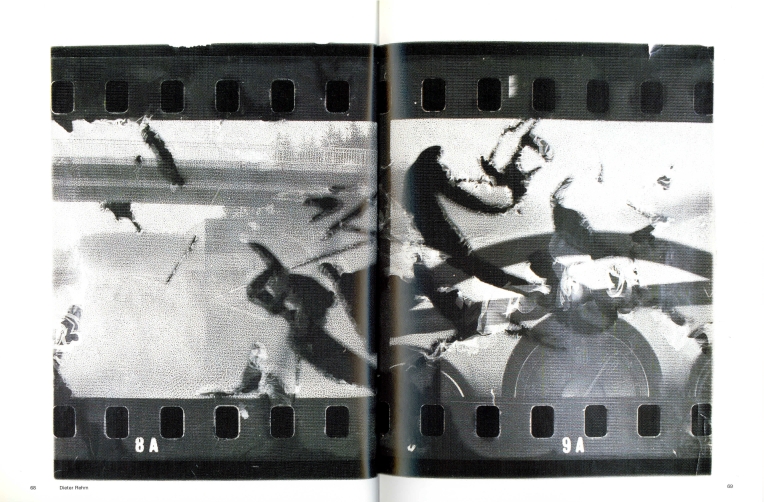 and the Statue of Liberty loses herself in nocturnal vertigo: 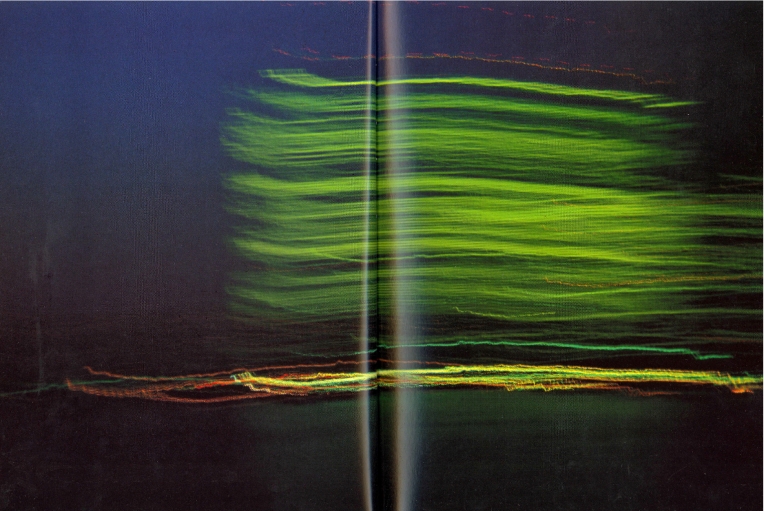 Many of ECM’s most striking covers, however, are strictly orthographic and provide no less potent stimulation for the senses through the skillful appliqué of resident designer Barbara Wojirsch. 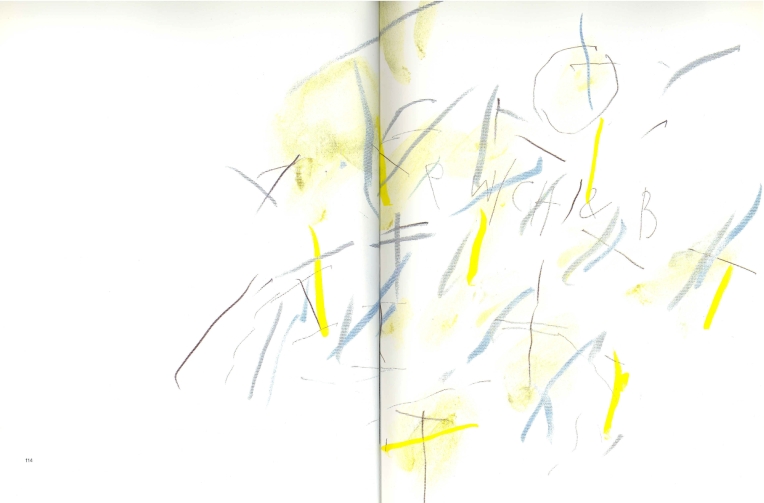 Her handwriting has given a visual voice to many an artist, not least of all to bassist Dave Holland, as in these striking mock-ups for 1990’s Extensions (ECM 1410), 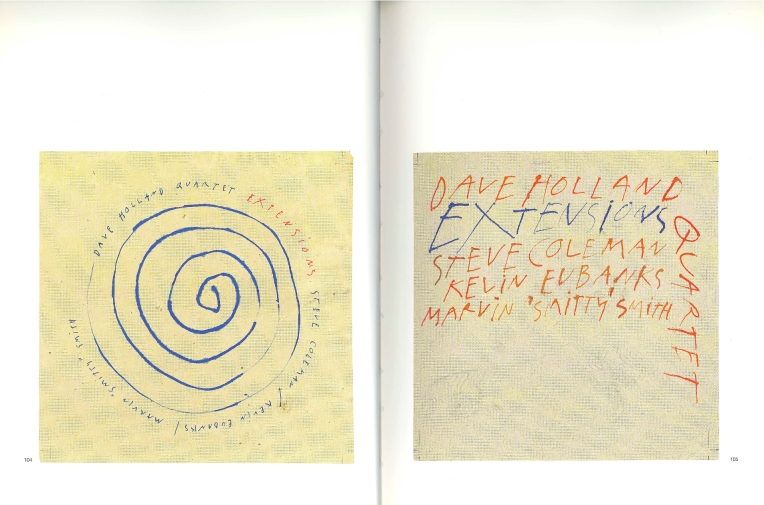 not to mention the ecstatic minimalism of Jan Garbarek’s I Took Up The Runes: 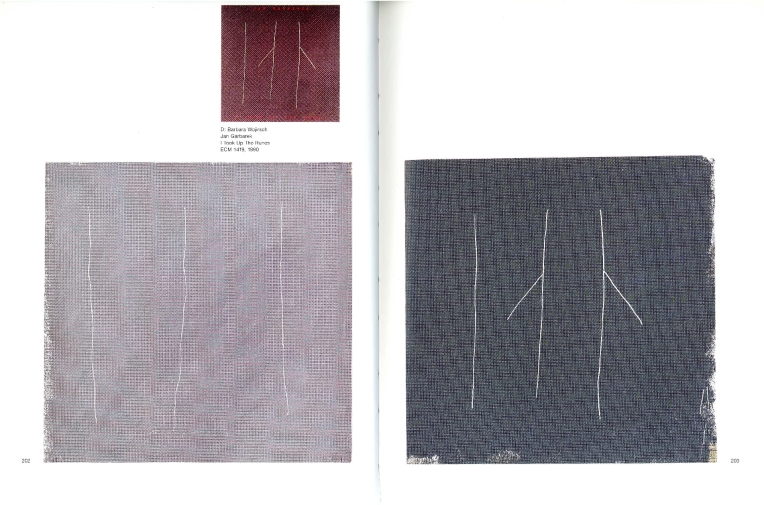 As valuable as Sleeves is as an art object, the weight of the images therein is matched word for stroke by the equally considered writings that accompany them. Peter Kemper sets the tone with a careful design of his own in the essay “Along the Margins of Murmuring.” Invoking philosopher Gernot Böhme, he lays out nature as a communicative network in which aesthetic impulses “translate” natural vocabularies even as they encrypt them. Where does a vision like that of ECM, we are led to wonder, fit into such dizzying arrays of retinal information? Yet rather than succumb to postmodern melancholy in his attempts to engage this query, Kemper makes a convincing case for the as yet indestructible efficacy of the visual—asserting that, “in the steady rising flood of images, pictures must still leave something to be desired. Art does not culminate in a virtuoso display of information; on the contrary, art begins where information ends.” Thus do we come full circle to the idea of image as stepping-stone, each incarnation a bubble of surface tension at the lip of sign and signal.

ECM’s visuality sustains what Kemper calls a “poetry of proportions,” and nowhere so vividly as through the work of Wojirsch, who has carried on since the death of her husband, Burkhart, Eicher’s friend and collaborator from day one. Wojirsch’s approach is an alchemy on its own, distilling from the sensorial tides that saturate our lives a most potent ocular tincture. If it results in only a single drop rather than a full vial’s worth, all the better for us at the level of deferential consumer. Each window—through its one of infinite possible intersections of framing, textual overlay, and resolution—is a portal through which boundaries are inexpressible except in the act of looking. It is “the sleeve as the semblance of sound,” the all-seeing ear of Gertrude Stein made manifest.

“Sounds originate in silence, but their goal is the reverberation and metamorphosis generated in listeners’ minds.” So writes Peter Rüedi in “The Audible Landscape,” and for whom ECM might as well stand for “Eicher’s Collected Memories.” Here, we get an even more lucid attempt to describe on the printed page what exists only in vibration. All art is animated by this atomic hum. “The singularity of ECM productions,” Rüedi notes further, “lies in the tension between a spiritual and a material dimension.” The same might be said for the book in which his words appear. On that note, Müller himself offers “It is the second sight that counts,” of which the title says all: There is something in these images that is beyond even the mind’s eye, a mystery far greater than the most windswept plain.

Steve Lake concludes with his comprehensive piece, “Looking at the Cover,” offering a more pragmatic view of the label as process (it also includes the wonderful poem epigraphed above). Lake dutifully reminds us that behind the ECM enigma there are human decisions, logistics, and labors at every turn. He also discusses the effect of titles on images, and vice versa, noting that the few exhibitions of ECM photography have sometimes jarred viewers by their very dissociation.

Eicher’s is a cinematic experience of music. We see this not only in his allegiance to such directors as Jean-Luc Godard 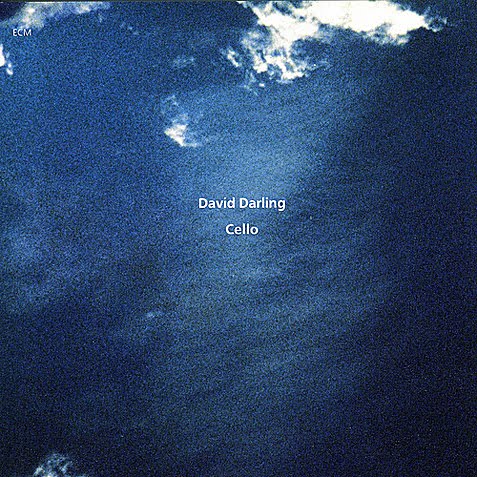 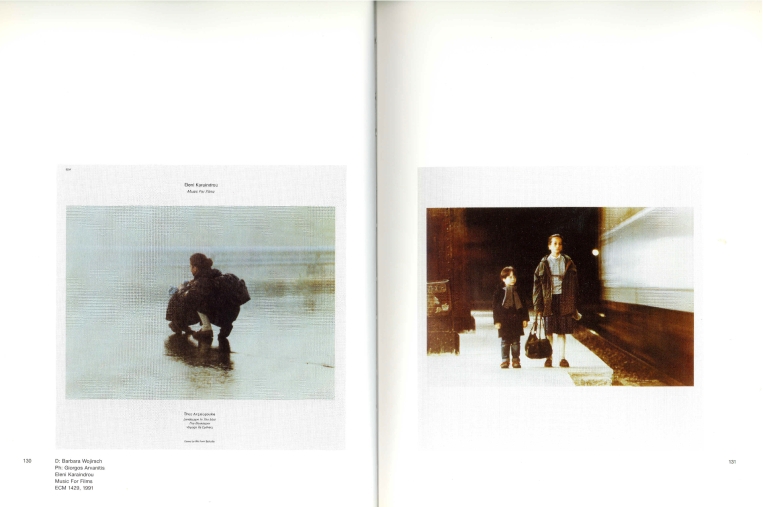 but also in the tale every cover tells. The characters may not always show their faces, but we are never in doubt of their voices. In this sense, Sleeves is more akin to a short story collection than a coffee table book. Within its pages lie countless diaries, travelogues, and enough intertextual details to keep one engaged for years. Each of those details is a treasure to be savored. Perhaps it is no coincidence, then, that CDs are housed in “jewel cases,” for such is their harnessing of light in the darkening storm of the digital age.

4 thoughts on “Sleeves of Desire”