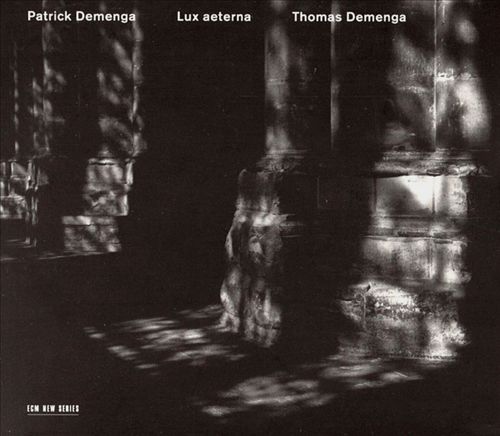 This album is a special one for having introduced me to the awe-inspiring pathos of Alexander Knaifel. Here, the phenomenally talented Demenga brothers give their most heartfelt performance in the composer’s Lux Aeterna. It is, by no simple means, a glorious meditation on the notion of divine light. Its structure is simple: high harmonics on the cellos give way to words intoned by the musicians themselves (cast in the score as “psalm singers”) before combining with strings, so that song is produced from all aspects of the body, through gesture and through sacred vibrations. A profound and moving piece, played with utter sensitivity and a dedicated sense of direction, this title work is more than the album’s theme, but also its genesis. One cannot help but be comforted in its ethereal embrace.

We might hope this mood could be sustained throughout the entire program, but the remaining offerings are no less engaging in their own right, comprising an intriguing potpourri drawn from the duo’s longstanding repertoire. Thomas offers up his own piece, Duo? o, Du…, an insightful look into the mind of this singular (albeit twinned) musician that delights with its deep-throated croaks and delicate relay of harmonics.

French composer Jean Barrière (1707-1747) was the finest cellist of his day, but his music is hardly ever recorded. Despite its upbeat tempi and virtuosic scoring, there is solemnity to be found in his G-major Sonata No. 10. Its buoyancy presages the Mozartean paradigm by half a century and rests on laurels of comforting fluidity. At certain moments the cellos ring out in lush, sweeping harmonies, leaving the bass line to float like a ghostly implication in the corner of our mental eye. The raw Adagio plays like a viola da gamba divided into its complementary personalities and captivates with its Baroque sensibilities. The resonant space in which the album is recorded ensures the cellos are given the widest berth possible, stretching the sonata’s third movement into a majestic fabric. After this tour de force, the Demengas change gears with a piece from Swiss compatriot Roland Moser. A student of Sándor Veress and Wolfgang Fortner, Moser writes in feverish yet contained bursts, as evidenced in the dizzying pizzicati and sharp bowings of his Wendungen. A sprinkling of silence ensures that the immediacy of its drama stays true to its quieter affirmations. Barry Guy’s Redshift brings us full circle to Kniafel’s invocation of light. The title references a process by which, not unlike a Doppler effect in sound, changes the visible spectrum as distance increases. With bows a-bouncing the cellists reap a varied crop of meditations and improvisations through which a cunning rhythmic acuity is brought to fruition. We end on a lullaby, left to writhe like Odysseus strapped to the ship that threatens to sail him into a song that will mean his demise.