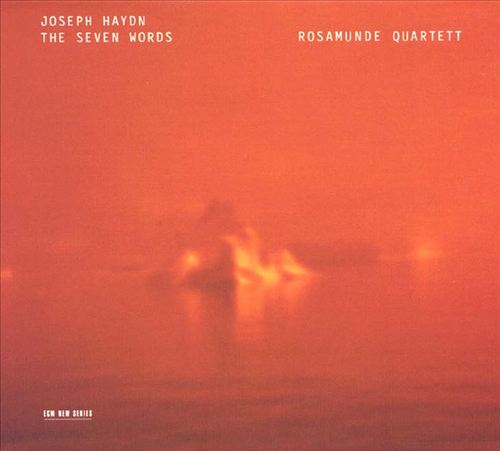 What a paradox it is that the trappings of language should bring us so much spiritual power whereby our actions speak not only louder than words, but in place of them. Speech can only be a stepping-stone, replacing our imagination with temporary idols. Rather, the breath of life inside language is itself the awe we seek. Franz Joseph Haydn (1732-1809) offers another possibility: that the divine word is pure sound. The Seven Last Words of Our Savior on the Cross is his crowning achievement in this regard, and transcends all possible semantic constraints. Prefaced by an introduction and ending with an earthquake, at its center beat seven hearts in sonata form:

Sonata I
“Pater, dimitte illis, quia nesciunt, quid faciunt”
(“Father, forgive them, they know not what they do”), B flat, Largo

Sonata II
“Hodie mecum eris in Paradiso”
(“This day thou shalt be with me in Paradise”), C minor, Grave e cantabile, ending in C major

Though originally written for orchestra, and in a state of religious fervor, the string quartet redaction performed here (it also exists as an oratorio and in a version for solo clavier), though questionably sanctioned by the composer, brings forth the music’s intention all the more vividly. Most scores will have the Latin texts directly beneath the first violin line, lest their efficacy fade in the absence of human voices, which makes the Rosamunde Quartett’s performance all the more astonishing for its enunciative clarity, an inward sense of tempo and nuance that seems to breathe through every instrument.

The opening proclamation is a wakeup call. While not especially dense, it nevertheless pulls us like a hooked fish. Its tight harmonies reveal a more porous foundation by which the benefits of language are weighed against its sins. We are swept past our conjectures with intense forward motion into a world of sound where Classical charm and Baroque pensiveness walk hand in hand. The violin strings the others like beads on a rosary. Through an almost serpentine motif and multivalent gentility, it exposes the folly of human ways by the light of retribution. We pause on the occasional neutral resolution before soaring into more rhythmically staggered interiors. In the Third Word, we encounter imbalanced key changes, thereby establishing the corpus of the piece as though a cocoon were unwinding itself into a path to the more urgent Fifth. By the time we take our final footsteps, treading carefully over muted strings, we lose ourselves in the trembling earth.