Hanns Eisler (1898-1962) is the subject of Heiner Goebbels’s fascinating homage, which has become as beloved as the music that inspired it. Eisler was the third protégé, after Berg and Webern, of the Schönberg dodecaphonic school, and a German expatriate who fled with close friend/collaborator Bertold Brecht in the 1930s to the United States, where he would go on to compose two Oscar-nominated film scores (1943’s Hangmen Also Die!, for which Brecht also wrote the script, and None but The Lonely Heart one year later). Just as he was settling into his exile, however, Eisler was deported (he was among the first to find his name on the Hollywood blacklist), but not before a series of benefit concerts—sponsored by Aaron Copland, Roger Sessions, Charlie Chaplin, Igor Stravinsky, and Leonard Bernstein, to name an illustrious few—were given to raise funds for his defense. Virgil Thomson, writing for the New York Herald Tribune, said of the final program on 11 March 1948:

The impressiveness is due less to any profound originality, as in the case of his master, Arnold Schönberg, or in that of his sometime model, the German-language works of Kurt Weill, than to his graceful and to his delicate taste. Eisler’s music, whether the style of it is chromatic and emotional, diatonic and formalist, or strictly atonal in the dodecaphonic manner, always has charm. It has charm because the tunes are pretty, the textures bright and light, the expressive intentions thoroughly straightforward and clear. Eisler is that rare specimen, a German composer without weight. He uses no heaviness, makes no insistence.

When Eisler returned to East Berlin he penned the GDR’s national anthem amid a spate of intense musical activity, culminating in a Faustian opera that was characterized by Neues Deutschland as “a slap in the face of German national feeling” and therefore never completed. After the death of Brecht, Eisler’s disillusionment intensified and plunged him into depression, during which time he breathed his last. 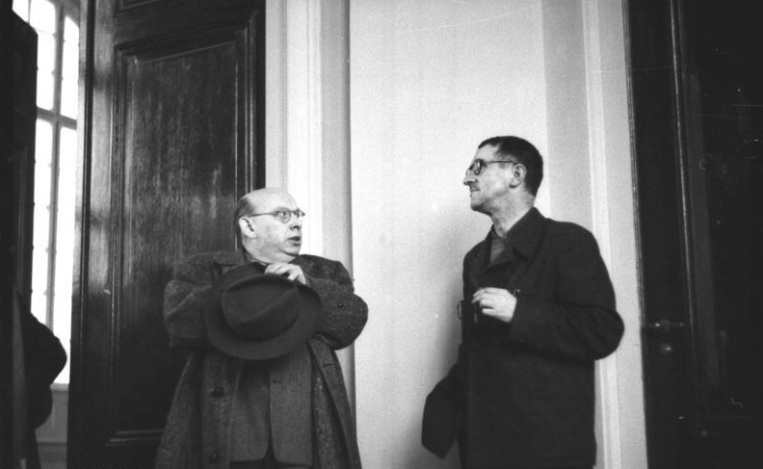 The dramaturgy of Eislermaterial calls for a small statue of its namesake to be placed at the center of the performance space: the surrogate conductor, standing in a field plotted like some gridless Go board. Befittingly, Eisler’s compositions make up the piece’s entirety. The resulting “assemblage” uses his many voices as raw materials for a tribute that shuns ideological heavy-handedness in favor of a bittersweet portrait comprised of lieder and relatively unknown instrumental pieces. The latter are artfully arranged and performed here by the discerning musicians of Ensemble Modern, who crack open the kinetic energy residing within. Of these, Suite for Septet No. 1 provides particularly delightful insight into this eclectic mind, while a fragment for string quartet is rendered all the more moving for being juxtaposed with a turn from his Orchestral Suite No. 3, which sounds like a big band falling down a flight of stairs. Wonderful. 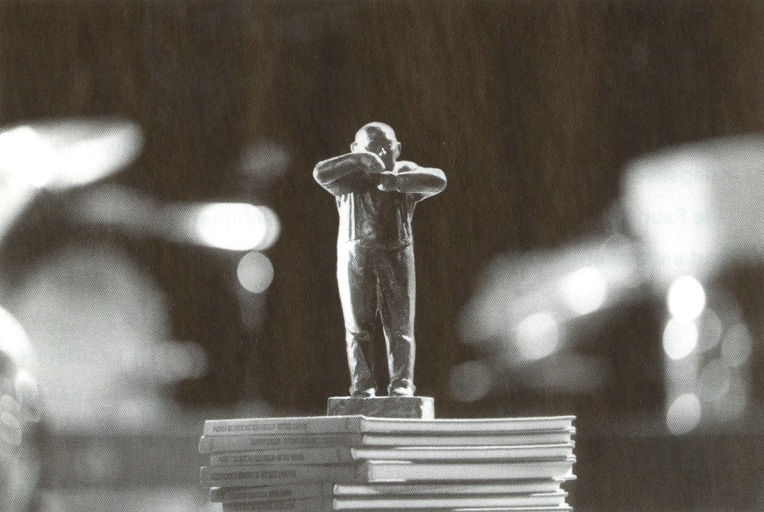 Eisler statue, up close and in situ (photos by Matthias Cruetziger)

Surrounded as these are by nine of Eisler’s songs, they take on more than mere interludinal quality, rather embedding themselves like nodules of concentration. Eight of these are settings of poems by Brecht. Tones range from patriotic (Children’s Anthem) and nostalgic (And I shall never again see) to proletarian (Four Lullabies for Working Mothers), and cover such themes as adaptability (The Grey Goose), the visibility of privacy (Mother Beimlein), renewal (Of Sprinkling the Garden), and fatalism (War Song). On Suicide unfurls the set’s most pensive backdrop, both lyrically and musically:

In such a country and at such a time
There should be fewer melancholy evenings
And lofty bridges over the rivers
While the hours that link the night to morning
And the winter season too each year, are full of danger.
For having seen all this misery
People won’t linger
But will decide at once
To fling their too heavy life away.

A verse by Peter Altenberg closes the set with a melancholic picture of resignation: “Eventually, longing dies, too, / as blossoms languish in a cellar / waiting daily for a little sun.” The interpretations are sometimes augmented by stark contrasts, such as the scratchy free jazz solo of The Grey Goose and the morose rubato of Mother Beimlein. Singer Joseph Bierbichler makes no attempt to sing like Eisler and instead brings out subjective and endearing performances that are as genuine as they are vulnerable. Goebbels also includes two “Audio dramas,” making use of clips from the Eisler archive in true Glenn Gould fashion. In these we are treated to his thoughts on sound, culture, science, and contemplation, evoking an age of black and white imposed upon a world of horrid color.

The comprehensive booklet for Eislermaterial includes an interview with Goebbels, who credits Eisler with having jumpstarted his life in sound. Certainly, one need hardly look deeply to see the affinity. Not only did Goebbels find his own Brecht in Heiner Müller, but both he and Eisler have successfully united politics and music in such a way that one finds them impossible to separate in the listening and likewise to dilute in the thinking. Eisler was more than a Marxist cog with a creative streak, and no one is better suited than Goebbels to tell that story to its fullest. This is the most “filmic” of Goebbels projects and lends itself wisely to an aural and textual world bound by an undying love for theatre. A masterpiece on all counts and a crowd favorite among fans and newcomers alike.